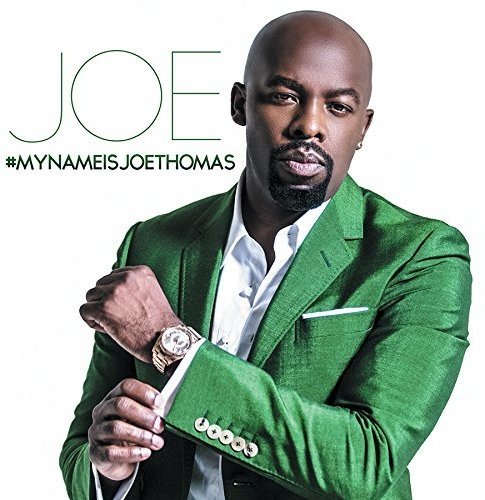 Grammy nominated R&B singer-songwriter and musician Joe Thomas, best known for hits such as “Stutter”, “I Wanna Know”, “All the Things (Your Man Won’t Do)” and “Don’t Wanna Be a Player”, returns with his 12th album, #MyNameIsJoeThomas, available everywhere music is purchased on digital and physical platforms.

TERRANCE: What has been the key component to your longevity in this ever changing music industry?

JOE: Being honest and true to myself. For me, my fans have sort of grown-up with me and I chose what I thought was best and that was to stay true to what I believe in and what I’m presenting to the world. When you want to do this or that or sound like this that’s when it become a problem, so in a nutshell staying on course has been the key.

TERRANCE: What’s the one song you feel defines your two decade career?

JOE: Probably “All the Things (Your Man Won’t Do)” for jump-starting my career and taking it to a level it had not been prior to. It definitely was a career making song for me and I’m grateful for the fans, radio, promoters and whoever else who took notice and rode with me every since. It’s been amazing man.

TERRANCE: Major vs. Independent: How does it differ?

JOE: I make ten dollars a record now compared to barely making a dollar a record with the major record labels [laughs]. You know I’m more confident now than I’ve ever been and to have that sense of independence to work with whoever I like without the red tape and extra stuff involved and to release the music I want my way 100% is incredible. It can be difficult to push independent music but I have a strong support team that I strongly believe in and we’re aiming to put R&B music back where it should be and that’s in the forefront.

TERRANCE: Which leads to the question, your thoughts on the state of R&B today.

JOE: I think R&B is at a catastrophe honestly and we need somebody to stand up and change that so it won’t continue to go that route and become an unheralded genre of music. For most parts I think with this generation it’s about the beat first and not meaningful lyrical content like it was in the Stevie Wonder, Marvin Gaye, Curtis Mayfield, Smokey Robinson era. My goal is to bring back that particular love for what R&B is.

TERRANCE: Bring us to date with the new album out now #MyNameIsJoeThomas.

JOE: My Name Is Joe Thomas is just music that’s relatable and connecting to everyday life about love and relationships for both sides men and women and basically a reintroduction so to speak to one of my biggest albums to date My Name Is Joe when people fell in love with music and actually bought music from record stores. I always reflect back to that 90’s era when people bought physical copies for the music, the artwork and to read the credits. It’s now a digital download world where I don’t think the whole package is enjoyed the way it should be.

JOE: Happy Hour is a fun mid-tempo song and working with Gucci was incredible. I’m a fan, “Wasted” and those records and to know he’s a fan of mine as well, because you never know in this R&B game, it’s not as respected as it once was in the 90’s so to know those caliber of artists say they are a fan of mine and would work with me is amazing.

JOE: I definitely think I should be further along in my career as far as recognition and that’s what I strive for. That’s what we all strive for whether it’s me, Ne-Yo, Trey Songz or Kanye West who would argue that he’s the best every time he comes out [laughs] and you know I share those exact sentiments and I respect him for his drive. I’m sure nobody wants to be runner-up when you can be at the top of your game.

TERRANCE: Who are some female voices today you thoroughly enjoy?

JOE: Jazmine Sullivan would have to be at the top of my list for the unique quality she possess and from one musician to another I think people are sleeping on her. I would even call her the Aretha Franklin of the generation today. That’s just how great she is. Brandy has always been a favorite of mine and somewhat overlooked. Lalah Hathaway, Chrisette Michele, they are all amazingly gifted vocalists.

TERRANCE: A while back you recorded the Gospel inspired song “Coming Back Home” with BeBe Winans and Brian McKnight, has recording a Gospel album in any way triggered your mind?

JOE: That’s an interesting question because both of my parents are pastors and I grew up in the Church, however; I feel you should be about that lifestyle and when you are people would respect it more. I’m doing secular music which is R&B and not considered God’s music I wouldn’t want to come off as a hypocrite.

TERRANCE: Is there anything additionally you’d like to add?

JOE: I just would like to thank the fans for the support and hope everyone enjoy the new album #MyNameIsJoeThomas. My new single and video “Happy Hour” with Gucci is out now. Follow me @JoeThomas4real on Twitter, MrJoeThomas563 on Facebook, therealjoethomas on Instagram. I’m also on tour so be on the lookout for dates. And thank you for continuing the efforts in keeping the R&B movement alive.
Posted by Terrance at December 20, 2016