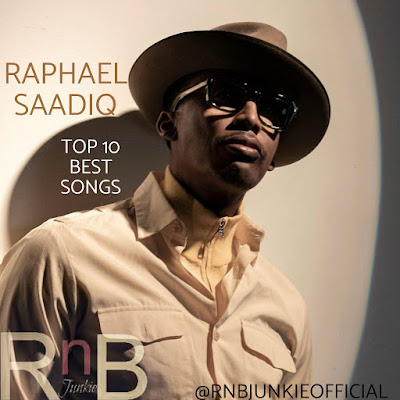 ﻿
Grammy Award-winning singer, songwriter and musician RAPHAEL SAADIQ will be releasing his new album Jimmie Lee this Friday (Aug 23rd) and it's a great time to look back on his past musical contributions as he continue on his journey. RnBJunkieOfficial compiled his top 10 best songs from his four albums and soundtrack features.

10 MOVIN' DOWN THE LINE
From the Album: Stone Rollin'

Another Motown-inspired sound, this standout single showcases how masterful Saadiq is vocally.

08 STAYING IN LOVE
From the Album: The Way I See It

Paying homage to the Motown sound, this standout upbeat song is sure to make Stevie Wonder proud.

06 LOVE THAT GIRL
From the Album: The Way I See It

This infectious Motown-inspired song served as the lead single and secured Saadiq a Grammy nomination in the Best Traditional R&B Vocal Performance category.

04 NEVER GIVE YOU UP (FEATURING STEVIE WONDER & CJ HILTON)
From the Album: The Way I See It

Saadiq collaborated with music legend Stevie Wonder (on harmonica) and then rising musician CJ Hilton on this groove. The song also secured the talented trio of musicians a Grammy nomination.

03 GET INVOLVED (FEATURING Q-TIP)
From the Album: The PJ's Original Soundtrack

02 BE HERE (FEATURING D'ANGELO)
From the Album: Instant Vintage

Released as the second single from Saadiq's critically acclaimed debut solo LP, this Grammy nominated song found his collaboration with fellow Soul singer D'Angelo to be a smooth, stand out cut.

01 ASK OF YOU
From the Album: Higher Learning Original Motion Picture Soundtrack

Saadiq's breakout debut solo single which peaked at No. 19 on the Hot 100's chart and No. 2 on the R&B chart. His one-timed group Lucy Pearl sampled the song on "Lucy Pearl's Way" and more recently rapper Wale and singer Jeremih sampled it on "On Chill".