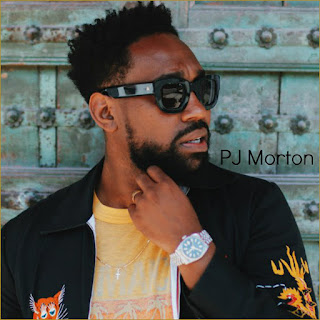 Terrance: Tell me how being born and raised in New Orleans sonically shaped you musically.

PJ Morton: Well, more than sonically it was a mentality. You're taught to really respect the music and the people who make it. So there's always a level of effort when creating. Sonically I just think I always took the rawness with me. And the horns!
Terrance: And speaking of New Orleans you will be performing at the Jazz Fest this year along with your band Maroon 5, Stevie Wonder, Dave Matthews to name a few. What are you most excited and looking forward to?
PJ Morton: Jazz fest is always one of my favorite times of the year to be home. It's fun when I'm not performing. So, now performing twice and having all that good music and food around is a bonus.
Terrance: What was the recording process like for the Gumbo album compared to previous projects?
PJ Morton: It was very organic this time around. It was my first time recording an album in New Orleans. Which made it very laid back and without pressure. I'd mostly be in the studio alone and then call in musicians as I needed them for specific songs. We'd jam out some. I'd take pieces of the jams and piece them all together.
Terrance: In “Claustrophobic” you mention having a hard time conforming to music industry expectancy, what initially inspired you to write that song?
PJ Morton: It was after having tons of meetings in LA. I felt like I was hearing a broken record. Nobody wanted to be different. Everyone wanted the same thing. No room for creativity. I felt backed into a corner and went to express myself the best way I know how… Claustrophobic came from that.
Terrance: What impact are you looking to make with “Everything’s Gonna Be Alright” which features BJ the Chicago Kid and The HamilTone’s.
PJ Morton: I'm looking at every song on the album as a single in its own way, but Everything's Gonna Be Alright I wanted to serve as a soulful anthem to the tension and discrimination that we're feeling these days. I just want it to encourage someone.

Terrance: From a vocal performance and songwriting standpoint, is there a particular favorite?

PJ Morton: They're all favorites in different ways. I think vocally “First Began” sticks out to me. That's the way I'd perform it live. Wanted to capture that emotion. Also Claustrophobic I felt that I sang it differently than I'd sang any other song before. And of course the message I think is the most direct I've ever been.

Terrance: Got you. So what is it you hope music listeners take from their experience with the Gumbo album?
PJ Morton: I hope that they can feel the individuality in it and feel motivated to create and be themselves. Also, I hope that it's something that can just vibe to straight through.

Terrance: Being an established musician who has played around the world what has been your favorite place thus far and what’s on your list in the future?
PJ Morton:  I'd say Brazil is one of my favorites for sure. Such good energy when performing there. Africa is on my list. I've only been to Morocco. Want to play all over Africa.

Terrance: Interesting. Maroon 5 released a new single “Cold” this year featuring Future. What can we expect from the forthcoming Maroon 5 album?
PJ Morton: Definitely a more R&B approach to this album versus prior Maroon 5 albums.

Terrance: In addition to the Jazz Fest, are there any other special appearances we should look out for?
PJ Morton: Essence fest will also be a special one!

WWW.PJMORTONONLINE.COM
Posted by Terrance at April 26, 2017