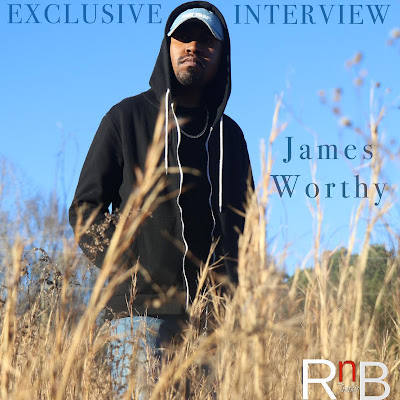 Last year, ‘RnB Junkie Official’ had the opportunity of interviewing Grammy-award winning songwriter, producer, and Billboard charting artist James Worthy. Today, James Worthy is back to discuss the release of his debut EP ‘Blu Leisure,’ with a track-by-track review. Check out our interview with James Worthy below!

”Blu Leisure” your official debut project as an artist released today. How does it feel?

It feels great! It feels like a long time coming. Of course, it's a debut project, but I've been working on it for at least a year and a half now, so it feels good to finally get it out and see what the response will be.

What would you say has been the most fulfilling part about creating this project?

Umm. Just actually collaborating with artists that I am a fan of, for one. Number two, just being able to express myself as an R&B act. You know, it's not an easy genre, nor an easy business to be in; I'm just happy that I am able to do it now.

Here, James Worthy shares a track-by-track review of every song, from their meaning, collaborations, and how they were purposely crafted to create the overall concept for the project.

2. "How Many Times (Feat. Tony Terry)"
"How Many Times," that song is probably one of the most interesting, but difficult songs I've done for this project. I say that because on that song it kind of tested my range vocally. Also, I had a chance to work with an R&B legend who is Tony Terry. If anybody knows who Tony Terry is, "With You" which is probably one of the most famous R&B songs. It was just an honor for me to do that and I just wanted to make something straight for R&B.

3. "Luv & High Levels"
"Luv & High Levels," is basically about you wanting to reach higher levels in life, but it's personal for me because this is another level for me in my chapter and I am going to keep growing. Also, it speaks about different levels in love. The way you think about it is if you're in a relationship, or love in general people perceiving you a certain way, people enjoying what you do in life. That's another form of it, so that's what the song is about. It's more of a mid-tempo, 808, bounce to it. I just wanted to put all of the three together and just kind of make something different.

4. "Glow"
"Glow," straight R&B, that's probably one of my favorite songs. It's really one of them feel-good laid back R&B songs that get you to think. "Glow," the meaning of it is, I'm with somebody, and I want them to see the glow up. I want them to see, "hey you know we're moving up in life." Whether it be musically, business-wise, socially, personally, [or] whatever that song is about the glow up.

5. "Call On Me (Feat. Sonna Rele)"
With "Call On Me," shout out to Sonna Rele. If you know who that is, she is an amazing vocalist who's signed to Motown Records. She blessed me with this feature; it's actually a duet. Technically on this record, it's just about if you're feeling lonely or want some company, don't hesitate to call on me. It's one of those feel-good songs too, but a little bit more in tempo, faster. It's just a dope record.

6. "Oceans (Feat. Kalenna)"
"Oceans," this is probably, I don't want to say my favorite song off the project, but it's definitely up there in the numbers. Shout out to Kalenna from Dirty Money. This song was actually really really easy to make. Ironically, I didn't think it would be easy at all. "Oceans" is just one of those dark, slower, midtempo records, but it's really melodic. Kalenna kind of gave me a different ear of how to approach this because initially, she recorded her vocals before I recorded mine, she kind of gave me the blueprint. With this song, you know whenever you're trying to seek positive energy or positive vibes, for me personally I think about an ocean, or I'm thinking about a sunset. I'm thinking about some tranquility environment, and that's what this song is about. It's about tranquility.

7. "Move (Feat. Ecstasy)
So, "Move" is the last song on the project, which is actually the single I released last year mid of 2018. The song features Ecstasy from the legendary Whodini, the group. It's an uptempo, Hip-Hop, R&B, [and] Caribbean influence vibe. It's something for clubs, something for the summer. Shout out to Ecstasy he blessed me with his verse which was amazing, honored to have him on the project and that song. It's about you moving, your body moving, you're moving through life. I'm with somebody that I really dig, and we're moving to a whole different level, so that's what this song is about as well.

What's one thing you would want listeners to walk away with after listening to this project?

Can you tell our readers where they can find “Blu Leisure” and how they can reach you on social media?

Yes, you can find me on social media @kingjamesworthy. That's on every social media platform. "Blu Leisure" is available on all streaming platform Apple Music, Tidal, Spotify, Google Play, Amazon, [and] anywhere you can get music it will be available.

On behalf of ‘RnB Junkie Official,’ we would like to wish you much success on “Blu Leisure,” and thank you for your time.

Thank you so much for having me.