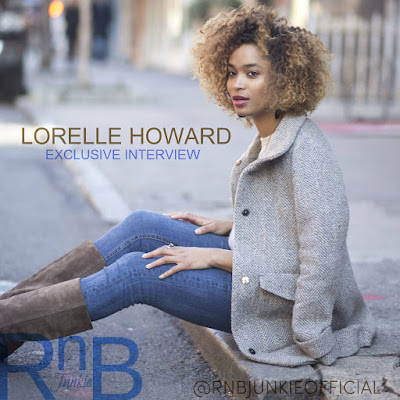 Emerging singer/songwriter, LORELLE HOWARD, has spent the last two years preparing a three part, experimental album based on her love of the number 7 and her fascination with the moon. Reconnecting with multi-platinum French producer, Blastar (Pusha T, Tyga, Dinos) in 2017, they began working on the independent project and finished recording the final songs in Paris. The first part, SE7EN PHASES: Moonscape, features a unique blend of genres and includes a track for each type of listener. Each song lures you in and then builds, leaving you inspired to hear more. More importantly each track has a message and discusses relatable themes. Written and recorded in Montreal and Paris, Moonscape is available across all platforms and her latest visual for her single, “Black Sheep” can be found on YouTube. If you happen to be in London, you may catch Lorelle singing one of her originals at various open mics.
'Se7en Phases: Moonscape' is available on all digital streaming music services

﻿
TERRANCE: First off, congratulations on the release of your debut EP Se7en Phases: Moonscape. What has the feedback been like thus far?

LORELLE HOWARD: Thank you so much. So far I've had some pretty good feedback. I'm currently in London and I've met some incredibly talented people who have been super supportive. It's been just over 2 weeks though, so we will be pushing Moonscape for a bit.

TERRANCE: How would you describe the creative process behind this project?

LORELLE HOWARD: Moonscape is just one piece of who I am. With this part, we wanted to actually explore sounds that I normally didn't use. My first single, “Shadows”, was an original I wrote and played acoustically and my producer elevated it to give it a more current sound, but it was super R&B. We wanted to push my capabilities with this Moonscape and it really worked. We discussed concepts and sounds and were led by that. Every single track has a little story behind it and that helped us to remain really creative. We also decided to do a 3 part project because we understood that there was no way to portray our artistry over 7 tracks. So Moonscape is just a glimpse. Also, each part features a song that is "other"...one that is not like the others. In this case, “The Moon” is the track that is different than the rest. It's simply an expression through sound. The other 2 parts will feature the same thing. It's truly an experimental project.
TERRANCE: Talk about the story behind your single “Black Sheep”.

LORELLE HOWARD: “Black Sheep” is a really personal song. With Blastar, my producer, we had many conversations about my sound and his music and I expressed feelings of self-doubt and feeling like I wasn't making popular music. We both have so many stories about this exact feeling and we wanted to create a song about it. Sort of how other people can put you down. It's this idea that as an artist you should be as creative as possible, but don't be too "other". Don't go too far or else it won't be understood. So it's a song about trying to find my voice as an artist and sort of questioning what I'm doing because I think everyone questions what they are doing at some point. But at the end of the day, although I'm saying I may feel like a black sheep sometimes, the message is to keep working and fighting for what you believe in. No matter what.
TERRANCE: What was the filming process and experience like behind the visual?

LORELLE HOWARD: I love this visual because it was really a last minute decision. We wanted to capture something moody and dark and one day my producer said let's walk around Paris and film. So it's 2 half days of footage spliced together. It was raining at one point, but it added to the overall vibe. We had other ideas too, but this just happened to work. We wanted to be literal. Like I'm a black sheep so I'm alone. Trying to find my way. And that's what the clip is. Super moody, dark and me trying to find my path.

TERRANCE: Is there a particular song on the EP that was harder to record than others?

LORELLE HOWARD: I'm like a speed recorder normally, but I was sick when I finished recording “Landmine” actually. This is always difficult. When you feel your voice wanting to give out, but you already paid for the session so you have to make it work. “Ascent” was also interesting as I only sang twice all the way through and we chose the best of each take. It's an emotional song so I had to control the urge to cry during that one.
TERRANCE: What role does Brooklyn play in your music?

LORELLE HOWARD: Brooklyn is where I spent majority of my adult life. I have seen so many things. I've watched my neighborhood change completely. I've worked in various places throughout Brooklyn. Majority of my friends are in New York and so songs like “No Change”, which is about staying loyal to the crew you have already, reminds me of Brooklyn and the people I love there.
TERRANCE: Are there any artists you would like to collaborate with in the near future?

LORELLE HOWARD: Of course. As an independent artist, there are literally a ton of independents I would love to work with. In terms of mainstream, I would say Janelle Monae would be first. The life in her voice is incredible. Brandy is someone who I would just like to sit in a room with and listen to her sing. I've dreamed of working with her. Next I would say Jaden Smith and Childish Gambino. I think they are both super talented and intelligent.
Independents would be KO-lition and Chris Brown, who actually happen to be friends of mine. Super talented brothers who are making waves right now. There are also some incredible artists I've met while in London: Geo, SOA, Laura Roy and Marc TC. Great talent. Go look them up. You won't be disappointed.
TERRANCE: Outside of music, what inspires you?
LORELLE HOWARD: I can be inspired by anything actually. Sometimes it's one conversation with my mom. Sometimes watching the people around me whom I love grinding. Nature. I'm inspired when I hear the laughter of a child. Honestly, we have a lot to be inspired by.
TERRANCE: Can we expect to see you hit the road anytime soon?
LORELLE HOWARD: My main plan is to do some smaller shows in NY and Montreal, which will hopefully turn into a tour. I also am working on the 2nd part of Se7en Phases, which will be out pretty soon. So we will see as I still have recording to do.
TERRANCE: In the next five years, where do you see yourself as an artist?
LORELLE HOWARD: Honestly, every day I'm evolving. My life is always changing; the world is changing. I always try to tell stories that reflect my present and I hope people relate. So I hope in 5 years, I'm doing something bigger that will affect change within people. My goal is always to inspire so as long as I stay true to that, I'm good.
TERRANCE: If you could create the ultimate throwback R&B playlist, what songs would you feature?
LORELLE HOWARD: Aaliyah for sure. Anything Aaliyah.
Mary J. Blige - Real Love
Brandy - I Wanna Be Down
Brownstone - If You Love Me
Blackstreet - No Diggity
Ginuwine - Pony
Total - Can't You Se
TLC - What About Your Friends
Soul For Real - Candy Rain
112 - Only You
Faith Evans - Love Like This
Mya - It's All About Me
SWV - I'm So Into You
Add any Erykah Badu, D'Angelo, Jodeci, Xscape, Tony Toni Tone, 702, Next and we're good.
This list can go on forever....
TERRANCE: Lastly, what do you hope listeners take away from the Se7en Phases: Moonscape experience?
LORELLE HOWARD: I hope people find a song that resonates within them and their lives. Each track is so different, but each song has a message if you listen. I also hope people love the music. A lot of work went into choosing each song. I want people to know that this is just a taste though!
Follow Lorelle Howard:
www.lorellehoward.com
Instagram @lorellehoward
﻿
﻿
Posted by Terrance at February 25, 2019