An Interview with Calvin Richardson 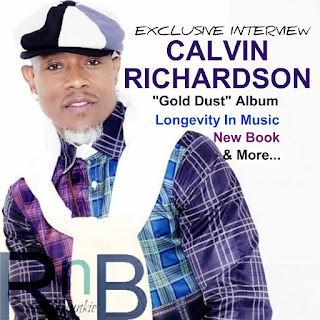 Grammy Nominated R&B Singer, Songwriter and Author CALVlN RICHARDSON recently released his eighth overall album Gold Dust via Shanachie Records which features the lead single "Let Me Love On You". I caught up with the North Carolina native for an exclusive interview where he share details about his latest album, longevity in the business, being an independent artist to his new book Do You, Without Them and much more... 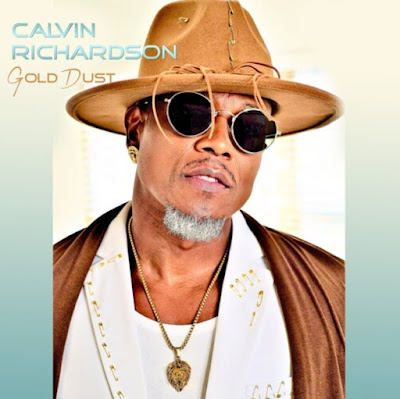 TERRANCE: First, talk to us about what inspired the title for your new album Gold Dust.

CALVIN RICHARDSON: I came up with the title of the album because when I signed up to do the album, I had six weeks from the time of execution to the time for me to deliver the album. Coming off the ride that I had with "Can't Let Go", my last single from the All or Nothing album, was huge and did really well. The biggest challenge was the fact I lost my voice in early 2018 and I was dealing with those type of issues and trying to cram it all in those six weeks. I started to feel the pressure to deliver at that point and like I said, the challenges, vocally. I was determined that if this pipe was to burst, it had to be filled with Gold dust from start to finish. I wanted to approach it the same way. I wanted it to be just great music, no matter what you pick and choose off the album, that's what you're going to get. Something equivalent to Gold dust. That's how I came up with it.

TERRANCE: What led to "Let Me Love On You" as the lead single choice?

CALVIN RICHARDSON: I mean, that's due to a process of elimination. There was no, this song stands out further than the others to me or I'm more attached to this one than that one. The record label polled different people that they respect as far as having the record played and hopefully that will determine when it's time for the single to come out, that they're gonna get behind it. There are like minded people out there and most times there are, in the radio world that play songs for artists, but it don't always work that way because everybody have their own people.

TERRANCE: To what do you attribute your longevity to in this in industry?

CALVIN RICHARDSON: Staying true to who I am as an artist. Being someone who has been committed to my cause of making meaningful music that's filled with substance and therapy to relationships and love. I spoke that from the time that I came in. It really resonated and connected with the people and it's starting to resonate even more now, because I've been doing it for so long and so I think that in itself attribute to my longevity. My loyal fan base know one thing you can count on is my consistency with that type of music of making a woman feel valued and for just being a woman from a man's perspective and know how to appreciate them.

TERRANCE: As an independent artist, what has been the most rewarding as opposed to the major label system?

CALVIN RICHARDSON: Being able to kind of call my shots and do things my way. Everybody want that at some point where you say, hey I'm pulling the shots and it's my call. When you're on a major label, you have to give that up or you don't necessarily give it up, but you just don't have it. They make the decisions because they're holding the purse strings, but in this situation I hold just about as much purse strings as whomever I'm dealing with. I have built my brand and I know it better than anybody that can come along and want to do business with Calvin Richardson. I know it, I know who my fans are and I have that connect, so I can pretty much take my lead.

TERRANCE: What led up to you authoring your new book Do You, Without Them?

CALVIN RICHARDSON: Well, you know it's just my career in the business. Being in the game for 20 years, I've learned a lot and I think I've learned how to do me without having a lot of things like my counterparts or everybody I'm close to in the business and even the one's I'm not close to. They had to have in order to find the success on the level that I'm on today. They had to have certain things that I didn't have, so it's kinda like I built my own machine and by not having,  I had to find my way around. It just created a longer road, but at the same time, it created longevity for me as well, so the book kind of chronicles my journey from the time music grabbed and interested me as a kid up until this point. It's motivational for people that have dreams and aspirations when they seem so far in the distance that giving up is the only resolve, but I'm proof that if you continue to stay true to who you are, success can be found for anybody. Anybody can be a winner. You just gotta get tired of losing.

TERRANCE: Thus far in your career, what has been a highlight or moment that has stood out?

CALVIN RICHARDSON: One of the biggest things is still having a voice out here after 20 years in the music business. That's huge to me and having a loyal fanbase that support what I do no matter what. They fly in or drive a long way to see me when I do the shows. That's a stand out for me. Then being inducted into the North Carolina Music Hall of Fame last year was big for me as well.

TERRANCE: Can we expect a tour soon?

CALVIN RICHARDSON: Absolutely. Next year, I'm doing a 2020 tour. I'll be in the business 20 years next year and I'm looking to do 20 cities. We're working on that right now, so it's going to be called the 2020 Tour. I've done a number of duets with several artists over my course of the 20 years, so in different cities we'll be bringing a surprised guest in and it will be one of those artist I've worked with along the way.

TERRANCE: You speak of 20 years, so looking back on your debut album Country Boy, what do you remember most about those recording sessions?

CALVIN RICHARDSON: I went in with high hopes and expectations. I was new in a sense, but I had great times and great memories. I went in with Todd Ray who was my Executive Producer. I learned a lot and I had a different vision of what the world was as opposed to what it is now, you know what I'm saying? It really shaped the mode of who I am today.

TERRANCE: What is it you hope listeners take away from the Gold Dust experience?

CALVIN RICHARDSON: Well, first I hope that they love what they pay their money for. I hope that the music touches them the way that I intended. There's a road map there for people that don't know how to love someone or don't know how to be loved. I hope they walk away with all of that information that's put into the music and just walk away in a better space than they were before they listened to it.

TERRANCE: Any last words you would like to share with both longtime and new fans and followers?

CALVIN RICHARDSON: I really wanna appreciate everybody verbally for supporting me over the years and the one's who didn't believe in me that took a little longer to get to the party. I appreciate them just as much as the one's that believed in me from the jump. A lot of people listen to the music now and say that it's everything and I say it wouldn't be nothing if you didn't have nobody that believed in it and somebody that support it, because without that, everybody out here that is an artist, we wouldn't have nothing to do when it comes to what we love to do. If performing, singing, writing and creating is what you feel for, then we'd be dead out in the water if there was nobody out there to embrace us and accept us for who we are, so I just want to say thank you to everybody out there who gave me a voice and an opportunity to let them know that I am who I said I am and accepted the music.