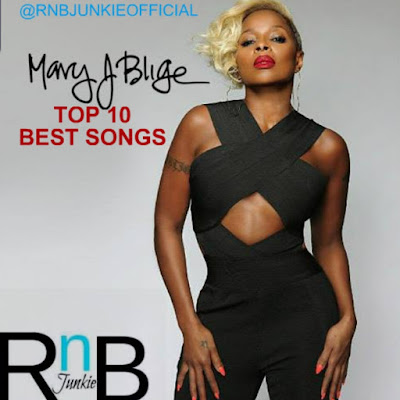 From the Album: Mary

One of the standout songs from Blige’s fourth LP. This mellow and lush cut was penned by Lauryn Hill and released as the official lead single, becoming a top 10 R&B hit and a Grammy nomination for Best Female R&B Vocal Performance.

The signature ballad from Blige’s groundbreaking sophomore LP which is a remake of Rose Royce’s classic original.

Released as the third single from Blige’s third LP, this soulful and melodic song features production from the legendary Jimmy Jam & Terry Lewis and peaked at No. 5 on the R&B chart.

07 FAMILY AFFAIR
From the Album: No More Drama

Produced by Dr. Dre, this club-ready banger finds Blige declaring no hateration and holleration in this dancerie! The party anthem went on to become her first No. 1 on the Billboard Hot 100’s and R&B chart respectively and earning her a Best Female R&B Vocal Performance Grammy nomination.

This standout song from Blige’s classic debut LP fuses Hip Hop, R&B and Jazz. Released as the overall fifth and final single, peaking at No. 5 on the R&B chart.

05 I’LL BE THERE FOR YOU/YOU’RE ALL I NEED TO GET BY (WITH METHOD MAN)
From the Album: Tical

On this Platinum-selling single, Blige teamed up with East Coast rapper Method Man. The song peaked at No. 3 on the Billboard Hot 100’s and topped the R&B chart and won the pair their first Grammy Award in the Best Rap Performance by a Duo or Group.

04 NOT GON’ CRY
From the Albums: Waiting to Exhale Original Motion Picture Soundtrack & Share My World

Written and Produced by Babyface, this song became Blige’s highest charting single at the time on Billboard Hot 100’s chart at No. 2 and fourth overall No. 1 on the R&B chart and securing her third Grammy nomination for Best Female R&B Vocal Performance.

This catchy, bouncy and joyful track was released as the lead single from Blige’s eighth studio LP, peaking at No. 3 on the R&B chart and was nominated for Best Female R&B Vocal Performance.

Blige’s first top 10 Billboard hit and second consecutive No. 1 on the R&B chart. This Gold-selling single which samples Audio Two’s “Top Billing” set the foundation sonically for what she’d go on to become; the Monarch of Hip Hop and R&B.

01 BE WITHOUT YOU
From the Album: The Breakthrough

Chosen as the first official single, this song peaked at No. 3 on the Billboard Hot 100’s and No. 1 on the R&B Chart where it spent a record 15 consecutive weeks and went on to win the Grammy Awards for Best R&B Song and Best Female R&B Vocal Performance.

HONORABLE MENTION:
"Mr. Wrong" featuring Drake
"No More Drama"
"I Can Love You" featuring Lil Kim
"You Remind Me" (Remix)
"Mary Jane (All Night Long)"
"Missing You"
"My Life"
"Love Is All We Need" featuring Nas
"Set Me Free"

HONORABLE MENTION ALBUM CUTS:
"Share My World"
"Mary's Joint"
"I Found My Everything" featuring Raphael Saadiq
"I'm In Love"
"Never Been"
"Till the Morning"
"If You Love Me?"
"Willing & Waiting"
Posted by Terrance at January 11, 2020

Email ThisBlogThis!Share to TwitterShare to FacebookShare to Pinterest
Labels: #MaryJBlige