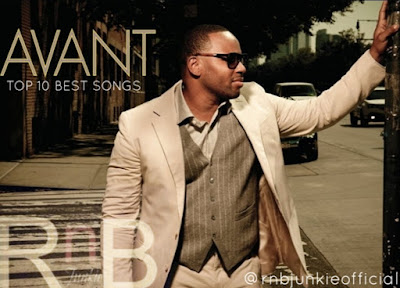 Singer, songwriter Avant recently released his ninth studio album Can We Fall In Love and it's a great time to look back on the R&B Vet's catalog of songs that extends 20 years. RnBJunkieOfficial have compiled his top 10 best songs and honorable mentions across all nine albums from My Thoughts, Ecstasy, Private Room, Director, Avant, The Letter, Face the Music, The VIII to Can We Fall In Love.

So without further ado, we present; Avant's Top 10 Best Songs...

10 SPECIAL
From the Album: The VIII

This track set the tone for what was to come from Avant's then eighth album. The infectious groove peaked at No. 4 on Billboard's R&B Song chart.

09 YOU & I (DUET WITH KEKE WYATT)
From the Album: Face the Music

A stellar duet with Keke Wyatt. This seductive and romantic track became Avant's second single to top the R&B chart.

08 DON'T SAY NO, JUST SAY YES
From the Album: Ecstasy

07 WHEN IT HURTS
From the Album: Avant

Produced by Antonio Dixon & Eric Dawkins, this standout track peaked at No. 15 on the R&B  chart and finds the singer wanting to change the narratives of love gone askew.

06 4 MINUTES
From the Album: Director

This catchy track was produced The Underdog and peaked inside the top 10 on the R&B chart at No. 9

05 DON'T TAKE YOUR LOVE AWAY
From the Album: Private Room

Selected as the second single from Avant's third album, this romantic slow jam reached No. 13 on the R&B chart.

A sultry and timeless Steve Huff production which became another top 10 R&B hit for Avant.

03 MY FIRST LOVE (DUET WITH KEKE WYATT)
From the Album: My Thoughts

Originally recorded by Rene & Angela, this powerful love ballad made an even bigger impact for Avant and Keke Wyatt, peaking at No. 26 and No. 4 on the Billboard's Hot 100's and R&B chart respectively.

02 SEPARATED
From the Album: My Thoughts

Avant's debut song to the world. This break-out track which peaked at No. 23 and No. 1 on Billboard's Hot 100's and R&B charts respectively, expresses a love gone wrong.

01 READ YOUR MIND
From the Album: Private Room

Produced by Steve Huff, this smooth track became Avant's highest Billboard Hot 100 entry at No. 13 and also peaking at No. 5 on the R&B chart.

Email ThisBlogThis!Share to TwitterShare to FacebookShare to Pinterest
Labels: #Avant