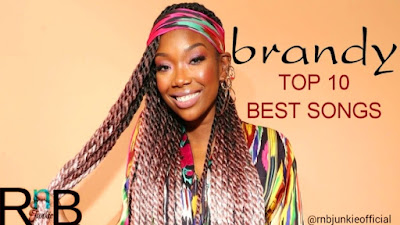 Grammy Award-winning singer, songwriter and actress Brandy recently released her seventh overall album B7 and we thought it's a great time to look back at her catalog over the years. We've compiled her top 10 best songs + honorable mention songs. So without further ado, here's Brandy's Top 10 Best Songs...

10 "TALK ABOUT OUR LOVE" (FEATURING KANYE WEST)
From the Album: Afrodisiac

Serving as the lead single from Brandy's fourth album, this Hip Hop and R&B-infused track paired her with rapper/producer Kanye West. The track which samples Mandrill's 1978 classic "Gilly Hines" peaked at No. 36 on the Hot 100's and No. 16 on the R&B chart.

Brandy collaborated with producer Mike City on this standout track which became a top 20 Billboard hit peaking at No. 18 and No. 16 respectively on the Hot 100's and R&B chart.

Released as the fourth single from Brandy's sophomore LP, this Guy Roche and Fred Jerkins-produced ballad peaked at No. 16 on both the Hot 100's and R&B chart and earned a Grammy nomination. The song was subsequently covered by Country recording artist Mark Wills.

This track showcased a more edgier Brandy which was released as the lead single from her critically acclaimed third album. The Rodney Jerkins-produced song peaked in the top 10 at No. 7 on Billboard's Hot 100's and No. 3 on the R&B chart.

06 "HAVE YOU EVER?"
From the Album: Never Say Never

Regarded as Brandy's signature solo ballad, this emotional Diane Warren-composed and David Foster-produced song topped the Billboard's Hot 100's chart and peaked at No. 2 on the R&B chart.

05 "THE BOY IS MINE" (DUET WITH MONICA)
From the Album: Never Say Never

Brandy teamed up with fellow singer Monica on this Rodney Jerkins-produced track which would go on to become the pairs most successful song to date. Topping multi radio chart formats and winning the Best R&B Performance by a Duo or Group at the 41st annual Grammy ceremony.

This Platinum-selling single was issued as the second single from Brandy's debut album. Peaking at No. 4 and No. 1 on the Billboard Hot 100's and R&B charts respectively. Brandy secured her first Grammy nomination with this song.

03 "ANGEL IN DISGUISE"
From the Album: Never Say Never

Although not officially released as a single, this standout Rodney Jerkins-produced track recieved heavy airplay support becoming a top 20 hit at No. 17 on the R&B chart. R&B crooner Joe makes an appearance on the song.

02 "SITTIN' UP IN MY ROOM"
From the Album: Waiting to Exhale Original Motion Picture Soundtrack

Produced by Babyface, this mid-tempo groovy single peaked at No. 2 on both the Billboard's Hot 100's and R&B singles chart and became a Platinum-seller and earning Brandy her second Grammy nomination.

Brandy released her breakout Gold-selling debut song to the world at only 15. This Keith Crouch-produced track peaked at No. 6 on the Billboard Hot 100's chart and topped the R&B chart. A remix featuring some of Hip Hop female heavyweights MC Lyte, Queen Latifah and YoYo was subsequently issued.

"Brokenhearted"
"Missing You" (Featuring Tamia, Gladys Knight & Chaka Khan)
"Best Friend"
"Right Here (Departed)"
"Put It Down" (Featuring Chris Brown)
"U Don't Know Me (Like U Used To)"
"Who Is She 2 U"
"Love Again" (Duet with Daniel Caesar)
"Wildest Dreams"
"He Is"
"Top of the World" (Featuring Mase)
"Beggin' & Pleadin'"

Email ThisBlogThis!Share to TwitterShare to FacebookShare to Pinterest
Labels: #brandy