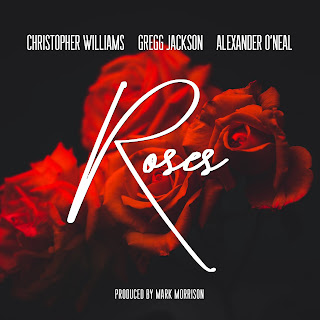 Gregg Jackson has brought the joy and intensity of the Motown/R&B nightclub experience to dancefloors all over the United States, and has performed lead and background vocals with artists such as James Brown, Ike & Tina Turner, Otis Redding, Herb Reed and The Platters. Christopher Williams is an R&B singer/actor from the Bronx, who emerged during the late 1980s with a New Jack sound. After the success of his first album, and hit singles, "Promises, Promises", and "Talk to Myself", his popularity was further cemented with a starring role in the movie, “New Jack City ,” and the No.1 R&B hit single “I’m Dreamin”, from the movie soundtrack. Alexander O'Neal is one of R&B’s most iconic names, with a multi-platinum catalogue, including international hit singles such as “Criticize”, “If You Were Here Tonight”, “Saturday Love”, “Never Knew Love Like This” and “Fake”.
“Roses”, is produced by multi-platinum singer-songwriter Mark Morrison, whose catalogue includes “Crazy”, “Innocent Man” and one of the most well-known hit singles of all time “Return of the Mack”. “Roses” is also released through Morrison’s independent imprint, MackLife Records.
Gregg Jackson, Christopher Williams, Alexander O’Neal, “Roses”, out now on all platforms.
Instagram:
@greggjackson28
@alexander_oneal_official
@officialchristopherwilliams
@markmorrisonofficial
@mackliferecords
Posted by Terrance at September 23, 2020