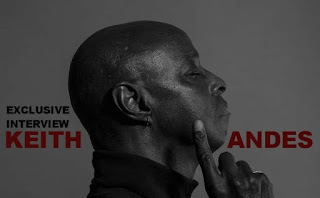 A classically trained pianist studying Choral Arrangement, orchestration and composition, Andes is celebrated for his prowess in both vocal production and instrumental arrangements and numerous platinum and gold sales awards from major labels including Capitol, Columbia, Epic and Warner Bros. attest to both his musical brilliance and his mastery as a producer.

In addition to writing and producing for artists including Babyface, Az Yet, James Ingram, En Vogue and After 7, Andes has both produced and created original soundtracks for television and film including Beverly Hills 90210; Jacksons: An American Dream; The Nutty Professor; Panther; Jason’s Lyric and others. Andes has recently composed and produced music for commercials for companies Walmart, Coca Cola, Teradata, Essence and many others and as a Composer for the film Across the Tracks.

Keith Andes new single "My Life" is available on all streaming platforms.

Email ThisBlogThis!Share to TwitterShare to FacebookShare to Pinterest
Labels: #keithandes