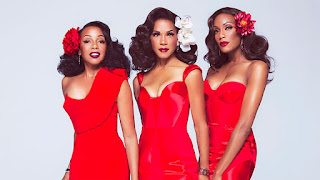 Formed in 1989, En Vogue broke onto the scene with their debut album Born to Sing. The hit single “Hold On” reached No. 1 on the dance and R&B/Hip Hop charts. Since then the group has sold more than 20 million albums. They continue to soar to new heights in the digital age following their 30th anniversary EV30 celebration, and have garnered more than 50 million views on their videos to date.

"Performing and bringing our music alive on stage has been a ‘secret to our success’ thanks to our fans that have been with us from the beginning. We’re excited to partner with HITKOR for a unique and innovative experience that will now bring our performance to fans around the world."

"En Vogue has influenced millions for decades and is considered one of the most successful female R&B groups of all time. We are very lucky to host these incredible ladies for their streaming debut on the HITKOR stage." -Russ Miller, CEO of HITKOR

Tickets are on sale now and available only at HITKOR.com. The live broadcast will be available to the public in more than 30 countries. Live tickets are $17.99 which also features an on demand broadcast. All Access passes are $19.99 and include bonus, behind-the-scenes content prior to the main show, as well as an exclusive interview with En Vogue.

Ticket buyers can tailor their experience via the multi-cam KORplayer and will also have extended access to the concert footage for a minimum of one year, allowing access not only for the live event, but whenever they want. Fans can watch the legendary vocal trio in HD 4K video, while immersed in HEAR360 Spatial Audio while using their favorite headphones or earbuds. In addition, fans become “directors” of the show by choosing from different camera angles and customizing what they want to see when viewing an encore performance, programming is available in Encore 72 hours after live stream. Using their mobile device, they can explore the stage in dynamic 180-degree virtual reality. A live ticket admits viewers to the main live stream event, while the all access pass upgrade includes bonus and behind the scenes content prior to the main show.

Follow @officialHITKOR and visit www.hitkor.com for more information including the upcoming show schedule.
Earlier in the year, En Vogue released the Expanded Edition of the Funky Divas album which includes the original 13 songs + 8 rare remixes:
Posted by Terrance at November 07, 2022

Email ThisBlogThis!Share to TwitterShare to FacebookShare to Pinterest
Labels: #envogue