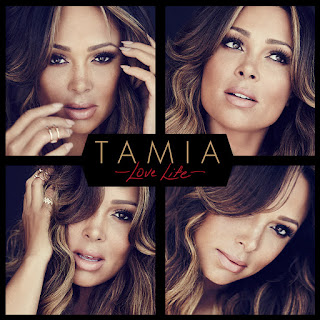 My interview with the phenomenal Tamia!! With 20 years in the business, six albums and consistently great performances Tamia has proven her longevity in the music business whether it’s on a major or independent label. Her album Love Life is available online and in stores now.

Terrance - Hello Tamia, how are you doing?

Terrance - You’ve had an amazing year with your sixth album, Love Life and i’m sure it’s not over. When you look back on it thus far, how proud are you?

Tamia - It’s definitely not over. I’m having a ball with this record and taking fans on this journey with me performance-wise is exciting and my most proudest. It’s all about Love, Passion, Life and Happiness you know?

Tamia - It really depends on the mood i’m in, so that’s difficult. That’s the great thing about music is that it’s all dependent of what you’re feeling. For sensual I go with Chaise Lounge, if I want to relax or chill time it’s Sandwich and a Soda, Day One for marriage proposal.

Terrance - “Sandwich and a Soda” and “Stuck with Me” have both been enjoying radio successes. Top 20 R&B hits. Are there any ideas on what the next single from Love Life will be?

Terrance - You recently took the Love Life tour to South Africa. What was that experience like?

Tamia - South Africa always welcomes me with open arms. The energy is great! There’s such an admiration for R&B and just music in general. You realize how small the world is and to get feedback from people you didn’t think know your music and they’re singing along. So it’s very uplifting and stimulating for me as an artist to get that appreciation.

Terrance - What is it like working with Claude Kelly?

Tamia - I knew of Claude in the industry and loved the work he did with Ledisi, Chrisette Michelle and Jessie J. We first collaborated on my Beautiful Surprise project and developed a close connection. When we’re on the phone or in the studio we have normal conversations about everyday things and from there a song is born.

Terrance - Tell us about your Plus One label you released the Between Friends and Beautiful Surprise albums under. What was the transition like going from major to independent?

Tamia - At the time I wasn’t with a label and Shep Crawford and I decided to just go in the studio to record. We recorded enough songs and I wanted to do an album and with the rise of social media at the time I didn’t feel I needed to take it to a major. We inked a distribution deal with Image and it’s been rewarding. Rewarding in the aspect I got to choose and control how the money was spent. With majors you never know where or how it’s being spent. Between Friends and Beautiful Surprise were done completely independent. There were times when you wished you were just the artist and someone else did the overhaul but it has been a learning experience and i’m gracious I took that step.

Terrance - What are your thoughts on R&B?

Tamia - R&B is alive and there’s some great R&B out there, however; the platform for it has diminished. If we support it, the more opportunities and mainstream recognition our R&B artists would get you know? You can’t complain if you’re not in the front line supporting. I’ve been in the industry 20 years and I’m fortunate and blessed to still be doing what I love.

Terrance - I remember a while back you were involved in the Queen Project collaborative album with Kelly Price and Deborah Cox. What’s the status with that? Will it ever get released in the future?

Tamia - For me it was a labor of love. Again, Shep Crawford came with the idea to bring three R&B Divas together. We completed the album in two weeks but the issue was timing. We were all signed to three different labels, three different managers, three different everything (laughs). So it was difficult to work and perform in a set time frame that benefited us. There’s no beef or love lost. The current status is unknown and I’m sure with a tour and right timing it will see a release. Keep hope alive.

Terrance - What’s your take on Reality TV. Is it something you would ever consider?

Tamia - Reality TV is a great platform to make your brand more visible but if it’s to exploit your personal life for ratings or to be judged or to be a punching bag for social media I wouldn’t be interested in it.

Terrance - Would you ever consider recording a Remake/Covers album? Because you’re known to deliver remarkable remakes like “Black Butterfly”, “Is It Over Yet”, “Day Dreaming”, “Careless Whispers”, “Love Me In A Special Way”, “You Put A Move On My Heart”.

Tamia - I absolutely love songs of the past and I try to include at least one cover on each album. I am definitely open to that. We will just have to see.

Terrance - Originally fellow singer Ashanti was featured on “Into You” with Fabolous but you replaced her. How did the switch happen?

Tamia - I recorded it first on my debut album as a solo artist. Conflict of schedules caused Elektra Records to scrap the Ashanti version. They said if they couldn’t get her then bring in the original singer and I was onboard for it and that’s how it happened. It made perfect sense to me.

Terrance - Who are your favorite singers?

Terrance - Speaking of Gladys Knight who you’ve worked with on “Missing You” with Brandy and Chaka Khan. Have there been any thoughts to perform it for the first time together next year for it’s 20th anniversary?

Tamia - It would certainly be an interesting gesture but no we haven’t discussed that.

Terrance - It’s been 16 years since you and Grant Hill has been married. In a time when so many celebrity marriages fall apart, what has been the key to your long lasting union?

Tamia - Communication and Understanding are important. We’ve made the commitment for the long term when we committed. Our children have also taught us patience so from that we’ve been able to grow individually and as a couple.

Terrance - Take us back to A Nu Day. That particular album have some fan favorites like “Long Distance Love”, “Can’t No Man”, “Dear John”, “Tell Me Who” and of course “Stranger In My House”. What was the recording process like?

Tamia - It was such a great time for music not saying music isn’t great now but there were so many good memories filled in that era. Shep and I would do our thing and let Sylvia Rhone who was head over Elektra at the time hear the tracks over the phone and she approved just about everything we put together. That’s how we knew it was a good product because usually when label heads hear your material you’re up for harsh criticism.

Terrance - “Spend My Life with You” which features a collaboration with Eric Benet is one of those songs I feel has stood the test of time.

Tamia - I appreciate that. I’m fortunate to have worked with Eric Benet and we still perform it live when we get the chance. It’s all about pureness and just feeling grateful to wake up to your significant other every morning.

Terrance - Quincy Jones took you under his wings and introduced you to the world. What was it like working with someone of his stature considering you were a new artist at the time?

Tamia - You Put A Move On My Heart was my audition song and with that I was able to tour the world with him. It was such a surreal moment in my life that I will always cherish. He taught me a lot.

Terrance - As an artist are there any other goals you would like to accomplish?

Tamia - I would just like to continue making great music. I would love a Grammy. I’ve been nominated six times and I was pretty close with the Beautiful Surprise project. There’s hope.

Terrance - Are there any upcoming events or shows?

Tamia - I will be part of the Legends of Love concert with Chaka Khan and Charlie Wilson in Oakland February 2016. Visit tamiaworld.com and @realtamiaworld on twitter for future details and dates. Also request Love Falls Over Me on your radio!

Terrance - Tamia, I appreciate your time and all you do.

Email ThisBlogThis!Share to TwitterShare to FacebookShare to Pinterest
Labels: Tamia