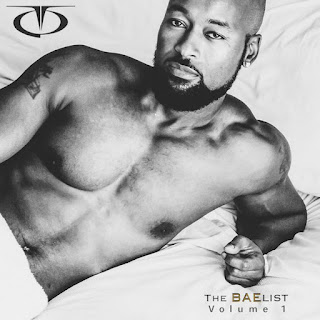 My interview with singer, songwriter and producer TQ. Best known for songs like “Westside”, “Way of Life”, “Bye Bye Baby” and “Daily”.

TQ began his musical career in the early 90’s in the teen R&B group Coming of Age which scored the hit “Coming Home to Love” and since then he’s released 7 albums and 2 EPs...here’s TQ!

Terrance - Your newest EP, BAEList - Vol. 1 is out now. How did you come up with the concept?

TQ - Well, basically it’s a membership on my website called BAERoom where it’s supposed to be women only but what they do is they pay a membership per month and they just get exclusive stuff that the rest of the site doesn’t get like photo shoots, music, videos, I give them a call periodically, sometimes when it’s Valentine’s Day or certain Birthdays of the members in there I just call their cell phone if they sign up with their information, so that EP was set up just for that membership but once it got out there and people started liking it I just put it up for everybody after a while.

Terrance - Can you briefly give us a break down track-by-track.

TQ - “My Room” is basically an introduction to it. Like most of my career I’ve done my own brand of R&B and it hasn’t necessarily been love songs or sensual songs or sexual songs and this is kinda the first time I put a full piece together so My Room is saying welcome to this side of me which is just straight up R&B.

“Rise” I’ll call it male morning sickness. I guess everybody dealt with it before it’s pretty straightforward. Early in the morning you’re in your bed with your woman. It happens naturally, it is what it is.

“Late” is a story about thinking a lot of relationships, you know, there’s a circle of us annoying each other, us loving each other, us being able to get each other out of funks and us having a way of putting each other in funks. So Late is about one of those times a guy and his girl, she’s putting him through the ringer and just imagine they’ve had a big argument, he’s sitting at home, he’s mad at her but thinking about her and just want to talk to her without yelling, screaming and hollering. He doesn’t necessarily want to call.

“How?” just says that how could I let something as great as you go. Something guys go through after they’ve after they thought they wanted a different type of lifestyle and go into that lifestyle and imagine themselves missing the woman they just left that was such a problem when they were with them. It’s just reflection. One of those reflective songs. I think overall women don’t get the man side, you know, we not really emotional like that. We don’t really speak about these types of things we go through in relationships and in between relationships going in and out of them. I think a couple of these songs especially that one show our side of it.

“Sideways” is actually a tribute, that’s a cover song by Citizen Cope  who is an alternative artist that I had a chance to go see live one night. I didn’t know who he was or anything but he sang this particular song. I absolutely loved it, I loved his performance, loved the writing of the song and I immediately bought the song and I listen and sing it out loud to myself all the time so I went on and recorded it.

Terrance - There’s also a single and video out for a song called “Coming Home”. Tell us about that?

TQ - Coming Home is actually the first single off of my album of the same name coming out later this year. We were gonna put the album out last year and it just started taking on a whole new shape, so a lot of it started changing and we’d already put the single out, had a plan for it and went on and did a video and dropped it. The album is ready to go now but it’s just a little later than we had originally intended. That song is basically about a guy doing time in jail and he’s been hearing about his old lady getting into some frivolous activities while he’s been in jail. He doesn’t know if it’s true or not, but it’s rumors so it’s kinda about him confronting her first thing when he get out because he wants to get it from the horse mouth because she’s visited him many times and hasn’t said anything about anything so he’s coming home to take care of business.
For me the whole album I think is a turn in my career to just go back to the beginning. Like I said earlier, I always had my own brand of R&B and I think the difference between now and in the beginning I was just doing music just to be doing it, just doing what I wanted to hear. And overtime, you get with labels and it becomes a business, trying to make money and you’re not necessarily in control of your full creativity. At this point man it’s all about writing songs and this album will be a reflection of the beginning.

Terrance - Take us back to your breakthrough hit “Westside” and how it was conceived.

TQ - I wrote that song for my people on the west coast when we lost Tupac to you know bring us back together because honestly for two years straight I felt like we were getting no love. Everybody were saying Brooklyn, Brooklyn and it was all about Biggie when he was killed and I had no problem with that at all but I needed something to bring us back. That record then took off everywhere even in New York, Atlanta, Chicago and international like the Philippines, London, China.

Terrance - Speaking of International, you have a huge following overseas. What are your thoughts on American artists having greater successes in other territories of the world?

TQ - I say Go for it. It’s all about paying attention to your fan base and who appreciate and value you as an artist. The way my career is set up in the international markets it allows me to keep working, performing and traveling without being in the major system.

Terrance - After establishing yourself, you then became affiliated with Cash Money Records. How did that happen?

TQ - I met Baby and Slim in LA around ‘99 when they were promoting the 400 Degreez album by Juvenile and they were on the radio asking where is TQ and from that point my pager and cell was blowing up from people telling me I need to find Slim, Baby, you know Cash Money, they out here looking for you. I met them at their hotel, we exchanged numbers, it started happening from there. At the time LA was the biggest market for my music, then New Orleans so they respected my music and what I was doing. They eventually bought me out of my contract with Epic and I made a lot of money with Cash Money so I’m grateful for the opportunity.

Terrance - You’ve been a guest feature on a lot of songs in your career. Which feature stands out most to you and why?

TQ - That’s a good one. I would have to say Way of Life with Wayne and Birdman and that’s the biggest collaboration I did so far. I loved how it flowed and came together. Wayne was at his best during that time and that’s not to neglect his later work but there was something magical about that joint and I’m grateful to have been a part of.

Terrance - The late Static Major collaborated with you and Krayzie Bone on the song “Paradise”. What was that experience like?

TQ - That song comes from the album of the same name. For me, the whole album has such a dark cloud over it and I have a hard time listening to it because Static and I had established a good friendship during the making of that song, we would hang out, party together. The song itself is never easy to perform but fans request it and I would never let them down.

Terrance - Not many may be aware you were part of the 90’s R&B group Coming of Age that produced smooth grooves like “Intimate”, “Baby Be Still”, “Coming Home to Love”, “One In A Million”. Do you still keep in touch with any of the guys?

TQ - Actually I was in the studio laying down a track a couple years ago with one of the guys . We all don’t sit down for dinners but we talk every now and then.

Terrance - Who were your greatest musical influences?

TQ - Marvin Gaye, Michael Jackson, Tupac and N.W.A. They were writing about subjects that were relevant at the time and setting it to music. Marvin was talking about What’s Going On? At that time that was one of the biggest questions, so I knew if I wrote from the heart I would do well. I would also throw in Prince.

Terrance - Do you remember the first album you ever owned and what it meant to you?

TQ - The original Straight Outta Compton album by N.W.A is the first album I ever purchased with my own money. It meant a lot to me because I grew up in Compton and related to what they were expressing.

Terrance - What’s the biggest misconception about yourself?

TQ - People thinking I’m a rapper when I’m far from it (laughs). You know, it’s annoying as hell when I see my music in the rap section in music stores.

Terrance - In two words how would you describe your sound?

TQ - Definitely law. When I was younger my mindset was on American football.

Terrance - I remember Jermaine Dupri saying once with a lot of artists today, you’ll only get two or three albums and that’s pretty much their career. As an independent artist, you’ve had the longevity and still going and I’d like to congratulate you on that.

TQ - Thank you and to all the supporters who make it possible to continue to do what I love.

Email ThisBlogThis!Share to TwitterShare to FacebookShare to Pinterest
Labels: TQ