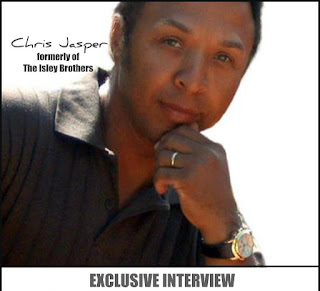 CHRIS JASPER formerly of the Grammy Award-winning and pioneering band The Isley Brothers was a key factor in revolutionizing their sound during their most commercially successful years (“That Lady”, “Summer Breeze”, “Fight the Power”, “For the Love of You”, “Harvest for the World”, “Between the Sheets”), discuss his earliest beginning with the trailblazing group, impacting generations and cultures and what he has in store next musically.

TERRANCE: First can you share a brief backstory on how you got involved with The Isley Brothers?

CHRIS JASPER: Well, we were all from the same neighborhood in Cincinnati, Ohio and our families knew each other. I knew them since I was born actually and as our families got closer, my sister married Rudolph Isley and they then moved to New York after they got married. What happened was as us younger guys got older me, Ernie and Marvin, we formed a band called The Jazzmen Trio. We used to play at Churches and Schools and things like that and the older brothers saw us playing and they liked what they heard and they wanted us to start playing with them so eventually we did start playing with them and the longer we played together we kind of just formed into a six member self-contained band.

TERRANCE: For those who might not know, talk about what your key role was in the band.

CHRIS JASPER: Of course I play keyboard that’s my main instrument but I also wrote a lot of the songs. I have a background in music composition so I was the arranger and produced all of those albums from 1973 to 1983. I even sang on records, mixed the records, played guitar and bass on songs so I did just about a little of everything.

TERRANCE: If there’s one important album that stands out to you what would it be?

CHRIS JASPER: I think the one album that stands out and turned The Isley Brother’s into a major group I should say was ‘The Heat Is On’. That was a #1 top 40 album as well as R&B so that kind of set us on a different course from that point on.

TERRANCE: As we know music always evolve and with that being said during your incarnation with The Isley Brothers, sonically was it hard transforming the group through each era?

CHRIS JASPER: When us younger guys got involved it did start to transform like from 1973 the group’s sound changed because my addition with the compositions, the chord structures and the arrangements and then Ernie’s guitar. The rock element was added to the sound so from that point the group’s sound changed dramatically. It wasn’t hard because it was what we did as musicians and we just added what we did and some of the musicians that played on the records weren’t playing on the records anymore like there were no more horn players and the drummer changed. There were people in The Isley Brother’s band that dropped out and we took over those roles so it wasn’t hard just a personnel transition actually.

TERRANCE: What are your thoughts when people say Soul music is dead?

CHRIS JASPER: I believe soul music is music that will always be played. It’s just who’s gonna play it? Soul music has a certain thing to it that reaches inside you. That’s why it’s called soul music and that’s where it gets it’s name from, so it’s gonna always be there. I just wish more people were producing it. I’m gonna always produce it because that’s what I am. I’m a soul/R&B artist so it’s not gonna go anywhere as long as I’m here (laughs).

TERRANCE: Your music has impacted many different generations and cultures along the way. Kendrick Lamar, Justin Bieber and Chance the Rapper are a few of the current artists who’ve sampled your past work. Did you expect your music to reach so many different audiences when you first started?

CHRIS JASPER: It’s no way you can tell really when you record a song like what it’s gonna do and the future of it that depends on a lot of things, but I’m pleasantly surprised that a lot of artists chose to sample the songs I’ve worked on and written. I think that’s a tremendous compliment when that happens, but when you’re writing a song you just want to do the best you can and hope it reaches people and do whatever it can do. So many artists have sampled that music and it’s incredible to see them do something different with it, you know? I don’t mind that happening as long as they go through the proper legal channel (laughs).

TERRANCE: Getting into The Isley Brother’s spin-off group Isley-Jasper-Isley. What was that transitional period like coming into a more shared lead vocal group?

CHRIS JASPER: Well, that’s the way we recorded like when I wrote a song and I put down a track I would sing it first in the studio and then Ronald would sing what I just sang so I was used to singing the songs because that’s how we recorded the songs only difference was Ronald didn’t sing it over so it was a pretty easy transition creatively from six members to three members.

TERRANCE: I remembered a while back the late Marvin Isley said during The Isley Brother’s years there were songs he felt Ronald shouldn’t have sung lead on.

CHRIS JASPER: Because well I kind of wrote the songs for myself and sometimes we have similar sounds when we do different phrases and sometimes it’s not. Ronald has a higher pitch to his voice. I view vocals as instruments they are part of the musical ensemble and some voices will blend better than others it has nothing to do with the quality of the singer. Like The Temptations had two lead singers, Eddie Kendricks had the high falsetto and David Ruffin with the more soulful kind of thing and it just fit better and it takes nothing from each vocalist. That’s the point I was making with some of the songs Ronald would sing and he was visibly uncomfortable singing some of them and I don’t think he wanted to sing some of them. I think the two older brothers were kind of used to him singing lead so they wanted him to sing. You know when someone writes a song and you don’t feel like you can sing it right you’re gonna feel uncomfortable doing it and that’s what happened with some of the songs and it was kind of weird because when I would sing it in the studio it sounded finished and then someone would come back and do it unnecessarily. It’s like somebody trying to do “Caravan of Love” again for whatever reason, like why would you do that? And that started to question what their motives were sometimes because if you hear something finished, what are we going to change it for? We’re all in this thing together, you know what I mean? It just had a bad vibe there for a little while.

TERRANCE: And speaking of “Caravan of Love” talk about how that song came together. CHRIS JASPER: I wrote that song while I was practicing actually. I was just trying to fill out some chords and seeing what kind of chord progression would work and I hit upon the main chord progression and then I started to work on the keyboard parts because I was playing around with the guitar originally when I came up with the idea. I started to fill out the chords and add the bridge and then I started working on the lyrics and melody. I wanted the lyrics to be something that relate worldwide you know? A message of peace. People coming together and that’s where I wrote the song from. That perspective is where I was coming from lyrically. It’s amazing how that song has been accepted around the world.

CHRIS JASPER: People all over the country have somebody performing that song either a choir or a school, at a program or bar. It’s amazing if you google “Caravan of Love” and see all of the performances. There’s no way I could’ve imagined it would’ve reached that many people but I’m glad it did because it’s a good message.

TERRANCE: Bring me to date with what you’re working on currently and what we can expect?

CHRIS JASPER: The new music is positive like “Caravan of Love” and the lyrics are all about positive things. Some are Gospel about the scriptures and if it’s secular there’s still some kind of message in it and that’s what I’m committed to do is to write positive lyrics and that’s where my music is coming from. I’m always working on new music and composing. It’s what I do.

TERRANCE: And to wrap it up is there anything additional you would like to leave with the readers?

CHRIS JASPER: If people want to hear the music I’ve done they can go to www.chrisjasper.com. There’s like 14 solo albums since I left Isley-Jasper-Isley and as always I appreciate the people who have listened to my music. The fans out there and the people who do comment and contact me that is important. When the new music gets out there I’ll have it posted and people can check it out.
Posted by Terrance at December 05, 2017