An Interview with Tony Terry 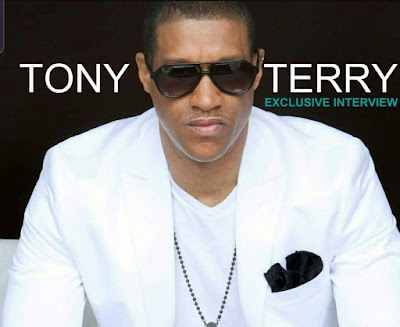 Legendary R&B singer Tony Terry known for hits such as “Everlasting Love”, “She’s Fly”, “Forever Yours”, “Lovey Dovey” and one of the most celebrated wedding anthems of our time “With You” is back with a new single called “Take Me” available in all online stores where music is purchased. I caught up with Tony Terry to discuss his new music, the New Jack Swing era, thoughts on R&B and much more!

Terrance: Talk about your new single “Take Me to the River” and the creation behind it.

Tony Terry: My new single is written by a friend of mine and I did write on the song but I didn’t write on it until it was mainly done. For example, when I got the song there was no second verse, so I had to write a second verse. The idea of the song in terms of production was to be super contemporary. The point was to make a record that radio would receive that didn’t sound like I was trying to be someone I’m not. I’m still singing the way I sing. It’s a grown and sexy kinda record. I knew I felt something special about it when I first heard it and so I recorded it but I wasn’t sure if I could deliver it but I actually think we got something really great.

Terrance: Is there an album on the agenda or singles the focus right now?

Tony Terry: There is an album in the can already. The reason I did a song like “Take Me to the River” is because I have an album of what I think are great songs, but you know in this microwave time that we’re in right now I wanted a record to kind of kick the door in to say, I’m back and I think “Take Me” is that record.

Terrance: What are your thoughts on the state of R&B right now?

Tony Terry: Well, I think that music is constantly evolving. I might not like a lot of the stuff that I’m hearing, but you know what? My parents didn’t like a lot of stuff we were listening to (laughs). They didn’t understand what we were listening to and I’m sure their parents before them felt the same way. I have an 11 year old son and some of the music he listens to I just don’t get so it’s constantly evolving and if you want to stay relevant you have to jump on without selling out and there’s a fine line of giving people what they want without selling out.

Terrance: Your debut album Forever Yours was released during the New Jack Swing explosion. What do you remember most about that era?

Tony Terry: What I remember most is that I was part of something that was actually happening. I didn’t realize it until we were all caught up.

Terrance: Which leads us to Bruno Mars sort of reintroducing the sound. Your thoughts?

Tony Terry: I agree. I think that Bruno Mars is not reinventing the wheel. He’s just riding the wave of something that’s already been done before and because he’s one of the few that’s doing that kind of music right now it sounds fresh and new. What it really is just a re-imaging of something that we’re all very familiar with.

Terrance: A lot of your songs revolve around love and relationships. What is it about these topics that makes you gravitate towards them?

Tony Terry: Well, because I love love and I’m trying to get that relationship thang worked out (laughs). I like to sing songs I like and they just happen to be love songs.

Terrance: Everyone have their perception on what success is. How do you define it?

Tony Terry: I’ve been able to take care of my family since High School with music. I think that’s pretty successful. I get to do what I love and make a living at it. That’s success to me.

Terrance: And to wrap it up. Are there any final words you would like to leave with the fans?

Tony Terry: I just appreciate the support and I hope that they are not disappointed with this new music. “Take Me” is the new single and I’m excited about it.
Posted by Terrance at February 06, 2018