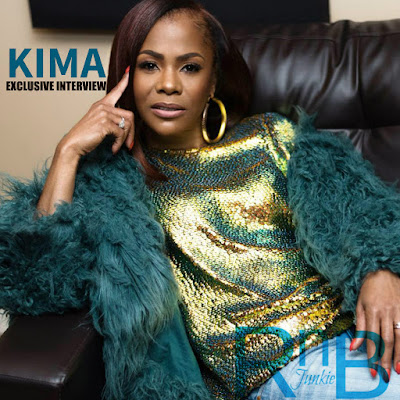 R&B songstress Kima who first burst onto the music scene as one-third of the iconic 90’s female group Total has returned to music with a new single and video “Luv Me Back”. I caught up with Kima to discuss re-launching her career as a solo artist, thoughts on R&B, Total and much more...

Terrance: First, congratulations on the release of your new single and video “Luv Me Back”. What has the response been like so far?

Terrance: Give us some background on the song. Was it inspired by a real life experience?

Kima: Okay, well the song was produced by Rich Shelton from One Up Entertainment. I mean, all of us have been in bad relationships or just a situation where we’re pouring into something and it’s not really loving you back, so the song is pretty much about a relationship but where it really relates to me is just me finally finding the confidence to love myself back and step back out there into my destiny.

Terrance: Talk about the “Luv Me Back” challenge and how the people can get involved.

Kima: Well, the “Luv Me Back” challenge is just people showing their support playing the song in the background hashtagging #luvmeback and #luvmebackchallenge. We really want to just get that going and trying to get the song trending and showing support and feedback as well.

Terrance: Is there an album or EP coming in the near future or singles the focus?

Kima: I definitely have more music to put out. I’m going to do an EP and another single and then gradually build it up to the point where I put my album out.

Terrance: Thoughts on R&B music today in contrast to when you first started in the business?

Kima: Well, first I love a lot of the music that’s out today. I feel like R&B and where it stand today is kinda getting lost in the mix. We definitely as R&B artists can use a little more support and a little more awareness to what we’re doing because we are still out here doing music and we’re doing great music.

Terrance: What was it about Total that stood out from other female groups that were coming out around the same time?

Kima: Definitely our uniqueness. Our swag and our style was different. We were more an R&B and Hip Hop type of group where we sang over Hip Hop beats versus melodic tracks. And our image we were definitely true to who we were and the label supported that. They didn’t try to change us. We had enhanced our three different personalities that just came together and gave this undeniable vibe.

Terrance: Can you share a special memory about recording the first Total album?

Kima: I just remember once we did “Juicy” and the feedback we were getting to go in and finally record our first single “Can’t You See” that came off the New Jersey Drive soundtrack was just epic. I remember Snoop was there. Back then artists showed other artists a lot of support and he was there with Puff and just wished us well. It just felt great to have someone like him who had already paved his platform to be in there supporting us like that.

Terrance: Out of all the collaborations Total has had, which one stands out the most and why.

Kima: I would have to say the one that stands out the most to us is “Juicy” because I really felt like not only did we record that with our brother Biggie, it really paved the way for us to put out Total.

Terrance: This month marks the 21st Anniversary of his untimely death. Where were you when you first heard the news of his passing and reaction to it?

Kima: I remember I was home living in Jersey with my mom and I was asleep. I got the phone call around five o’clock in the morning from a friend and you know I just really couldn’t believe it. I was just devastated and I was hurt because Biggie was like a brother and no pun intended how everyone is like, Hey bro or hey sis, like Biggie would visit and spend quality time with you and he was like that with everybody on the roster.

Terrance: The sophomore Total album Kima, Keisha & Pam, turns 20 this year. Is there a personal favorite song or one you thought should have been a single?

Kima: One of my favorites on that album is “Do Something”. Missy really did her thing on that album. I remember going down to continue record the album with her, Tim and their team and just as we recorded one song next thing you know Missy pretty much did the whole album. That whole album I feel like has some records on it that weren’t released that should’ve been.

Terrance: Besides the new music, is there anything else you’re working on that you can share?

Kima: I’m working on a docu-series. I actually pretty much recorded it and it’s done. We’re just waiting on the final edits and we’re going to start dropping those as webisodes onto my social media network which everyone can follow me on all social media @totallykima and my website www.totallykima.com. I’m always in the studio working on new music and will be preparing to figure out what’s the next single or songs I’m gonna put on the EP and releasing that sometime before the end of Summer.

Terrance: Any final words you would like to leave for the fans and readers?

Kima: I just want to tell everyone that it’s never too late to pick up the pieces and complete your puzzle. Sometimes we question, like a lot of times I be like, why now? We never really know what God has planned for us. We might want one thing but he has a whole ‘nother plan. Just trust the process and believe in yourself and have the confidence and do you.