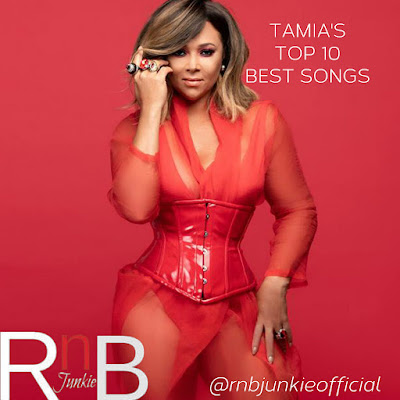 In honor of Grammy nominated R&B recording artist TAMIA birthday @RnBJunkieOfficial do her the honor of featuring her in our latest edition of Top 10 Best Songs. With seven albums, six Grammy-nominations and multiple hits, Tamia has proven herself as one of the constant fixtures in R&B music. As a disclaimer, in our top ten selections we stuck with singles, but also noted several honorable mentions and deep album cuts.
Here are Tamia’s Top 10 Best Songs… Presented by RnBJunkieOfficial

10 LEAVE IT SMOKIN'
From the Album: Passion Like Fire
This 90’s inspired Salaam Remi-produced song is the lead single from Tamia’s upcoming album and has been enjoying a great amount of impact on the R&B charts, Urban AC No. 2 and R&B No. 16 respectively.

09 YOU PUT A MOVE ON MY HEART
From the Album: Tamia
Legendary record producer Quincy Jones introduced us to Tamia with this song. Originally recorded by British singer Mica Paris. It was Tamia’s version that would become a commercial success, secured her a Grammy nomination and showcased her powerful voice.

08 BEAUTIFUL SURPRISE
From the Album: Beautiful Surprise
This upbeat feelgood Salaam Remi-produced song was released as the lead single from the album of the same name. Tamia also received a Grammy nomination for this song.
07 STUCK WITH ME
From the Album: Love Life
An infectious groove produced by Polow da Don. This standout song was released as the second single.
06 ALMOST
From the Album: Between Friends
Chosen as the third and final single, Tamia’s longtime collaborator Shep Crawford produced this mid-tempo R&B jam.
05 SPEND MY LIFE WITH YOU (DUET WITH ERIC BENET)
From the Album: A Day in the Life
In 1999, Tamia and Eric Benet teamed up to record what is easily one of the greatest wedding songs of our time. This timeless ballad became a No. 1 R&B hit and secured them both a Grammy nomination.

04 OFFICIALLY MISSING YOU
From the Album: More
Released as the lead single, this standout song displays Tamia’s versatility as an artist with it’s acoustic style relying on acoustic guitar with her vocals prominently showcased.
03 STILL
From the Album: More
This standout song was released as the fourth and final single from Tamia’s third album. Subsequently, she re-recorded the song for her fifth album, Beautiful Surprise with a new arrangement and production.
02 SO INTO YOU
From the Album: Tamia
Produced by Tim & Bob, this was Tamia’s original breakout song in the Summer of 1998. Peaking at No. 7 on the R&B chart. The song has since been remade by Tamia herself and rapper Fabolous retitled “Into You” and more recent Childish Gambino covered it for Triple J’s Like a Version.
01 STRANGER IN MY HOUSE
From the Album: A Nu Day
Tamia’s breakthrough hit peaking in the top 10 on Billboard’s Hot 100’s and a top 5 R&B hit. This song was produced by her frequent collaborator Shep Crawford and further solidified her status proving herself to be a powerhouse vocalist.
HONORABLE MENTION:
"Imagination"
“Questions”
“Can’t Get Enough”
“Tell Me Who”
“Slow Jams” (Featuring Quincy Jones, Babyface, Portrait & Barry White)
“Loving You Still”
“Love Falls Over Me”
HONORABLE MENTION ALBUM CUTS:
“Never Gonna Let You Go”
“Love Me In A Special Way”
“Long Distance Love”
“Too Grown”
“Dear John”
“Chaise Lounge"
"Poetry"
Posted by Terrance at May 09, 2019