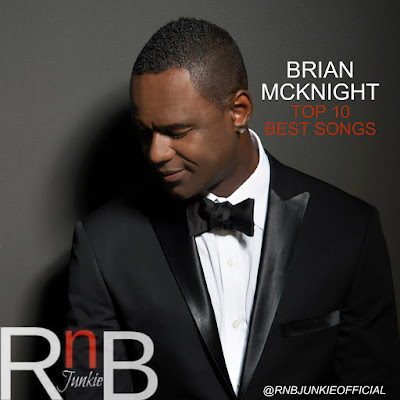 In honor of 16x Grammy-Nominated Legendary vocalist BRIAN MCKNIGHT birthday today, RnBJunkieOfficial compiled his top 10 best songs in our latest edition of Top 10 Best Songs. In his illustrious career he has released 13 studio albums over the span of 25 years including his latest project Genesis. As one of the most consistent artists in R&B/Soul music, there was plenty to choose from standout songs to honorable mention album cuts and singles.


10) THE ONLY ONE FOR ME
From the Album: Anytime

Released as the third single, this standout song earned McKnight a Grammy-nomination.
09) 6, 8, 12From the Album: Back at One

McKnight once again pours his heart out on this Grammy nominated emotionally changed gem.

08) FIND MYSELF IN YOU
From the Album: Ten

07) YOU SHOULD BE MINE (DON’T WASTE YOUR TIME) FEAT. MASE
From the Album: Anytime

Chosen as the lead single, this song became a top 20 hit and displays McKnight's versatility as a vocalist. Powerhouse vocalist Kelly Price also assist in co-writing and background vocals.

This dynamic duet with McKnight and Vanessa Williams peaked at No. 3 on Billboard's Hot 100’s and earned the pair a Grammy-nomination.

04) LOVE OF MY LIFE
From the Album: Superhero

McKnight pours his heart out masterfully on this self-written and produced track and it went on to secure two Grammy nominations.

03) ANYTIME
From the Album: Anytime

Released as the second single, this song earned McKnight a Grammy nomination. While it wasn’t a major success on the charts, it remains one of his standout songs in his repertoire.

02) ONE LAST CRY
From the Album: Brian McKnight

This song was McKnight's original breakout hit peaking at No. 13 on the Billboard Hot 100’s chart. Due to it’s impact and meaningful lyric the song has since been covered by many artists across the world.

This Gold-selling single earned McKnight a Grammy nomination and further solidified his legendary career. Becoming the highest charting solo single of his career peaking at No. 2.

HONORABLE MENTION:
“Never Felt This Way”
“Still In Love”
“What I’ve Been Waiting For”
“Everytime You Go Away”
"Grown Man Business"﻿
﻿
Posted by Terrance at June 04, 2019