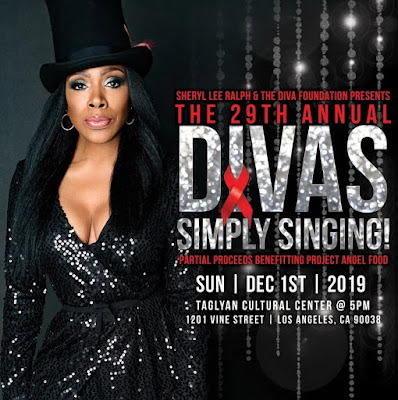 The performers will pay tribute to the recipient of this years’ DIVAS Legacy Award, songwriter Diane Warren. Warren will be honored at the event for her numerous accolades and significant contributions to the music industry. The evening’s set list will feature some of Warren’s biggest hits, including “Because You Loved Me” sung by Ralph, “I Don’t Wanna Miss a Thing” sung by Dixon, and “I’m Standing With You” sung by Metz.

"We now live in a time where it is possible for a person living with HIV to maintain an undetectable viral load and not be able to transmit HIV sexually," Ralph said in the statement. "While we have come a long way in this fight, I'm sad that we still don't have a cure—there is still a reason to fight for those we love!"

The event is produced by Ralph's DIVA Foundation. The beneficiary of the event is Project Angel Food, a charity that prepares and distributes thousands of meals to shelters across Los Angeles.
Posted by Terrance at November 14, 2019