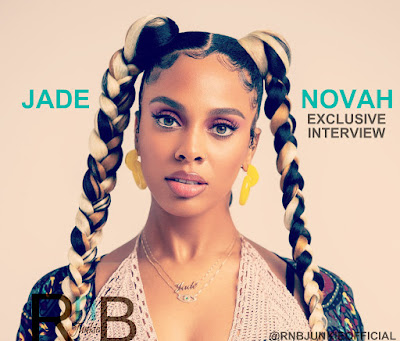 Singer, songwriter, actress and social influencer JADE NOVAH returns with a new single "Somebody Son" which follows after her 2018 debut album All Blue. I caught up with the Songstress to discuss the new song, her follow-up album, upcoming Stages Tour, growth as an artist and much more...

LISTEN TO "SOMEBODY SON" BELOW:


TERRANCE: Talk about your growth as an artist since you've first come onto the music scene.

JADE NOVAH: My biggest growth has really been just believing in myself more and trying not to take things personally. I went through a phase where I kept getting in my own way. I’ve gotten back to this space of creating for passion and love, and not so much the approval of other people. I’m still a work in progress, but my ultimate goal is complete fearlessness.


TERRANCE: You just released a new single called "Somebody Son". Congratulations on that. What's the meaning behind that song?

JADE NOVAH: Thank you! It’s honestly about where my heart and mind were when I first met my husband, Devin Johnson, who co-wrote the song with me. He co-produced it with SK (shout out to them, they are amazing!) Anyway, I had been through some bad relationships, but at that time I was single, confident, and independent in a way that I hadn’t been before. I knew more about what I wanted and I wasn't afraid to voice those things, especially when it came to sex, love and relationships, so yeah...the song is based on some of my early encounters with him. The artwork for the single is actually a picture of us from one of our first times out together. As you can see, he was into it.

TERRANCE: Can we expect a visual anytime soon for "Somebody Son"?

TERRANCE: Are you working on a follow-up album, EP or Mixtape?


JADE NOVAH: Yes, album! I'm so excited. I just announced a new tour, the “Stages Tour.” It kicks off. March 20th in San Francisco. So, of course, there's gonna be new music for the new tour. I'm really excited about this new album. It’s a very reflective project that tells stories from different stages in my life, and I feel like a lot of people will be able to relate to the ups and downs. We’ve all been there.

TERRANCE: How would you describe your sound to people who are hearing you for the first time?

JADE NOVAH: I grew up listening to everything from Bone Thugs and Harmony to Whitney Houston to the Beatles, and I think that my music is definitely a reflection of that eclectic musical upbringing. I would say it's like futuristic nostalgia. My sound can be ethereal and sometimes it leans more theatrical. I started out as a writer, so as an artist, lyrics are very important to me. I also grew up studying and admiring the great vocalists of the past, so vocals are also very important to me.  A lot of the production on my new project is  rooted in hip-hop and fused the musicality of R&B from the past. I think that's the best way to describe where my sound is now.

TERRANCE: I know you're independent, but do you have any plans to go mainstream with a label?

JADE NOVAH: Definitely, I would love to know what it feels like to have help (laughs). I am always open and willing to do anything that makes sense. The biggest thing for me has always been ownership and creative control. So if I can find a situation that feels right, then absolutely.

TERRANCE: As an R&B singer, who do you look to for inspiration?

JADE NOVAH: Growing up I was inspired by Whitney Houston, Brandy, Mariah Carey, Toni Braxton, Celine Dion...I always end up going back to their music. I also love hip hop. Lil Kim, Left Eye, and those artists like Missy and Lauryn Hill who fused hip hop and r&b together. I feel like hip hop is way more free than R&B, you know? Hip hop has such an unapologetic cockiness and fearlessness about it.

TERRANCE: Who are some current artists you're listening to either major or independent that you would highly recommend?

TERRANCE: You mentioned your upcoming Stages tour. Talk about the excitement with that and what people can expect.


JADE NOVAH: I’m so excited to go back on the road again. I love the energy that I feel from the audience when they connect with and sing along to my music. My husband is my musical director, and we're creating a really cool show that is centered around us playing together. He's a multi-instrumentalist so we're definitely gonna have fun with that! Vocals, vibes, new music, and good energy. I can’t wait!

JADE NOVAH: Support independent art, support women in the arts, support black art. I’m grateful to everyone who has been a supporter of my art over the years and anyone just tuning in. Make sure you guys support my new project and come out and see me on the road! You can get to my new music and get tickets to my Stages Tour. 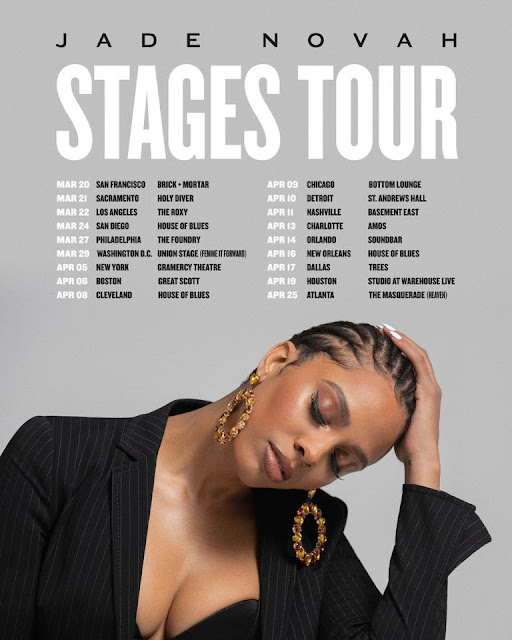 Email ThisBlogThis!Share to TwitterShare to FacebookShare to Pinterest
Labels: #jadenovah