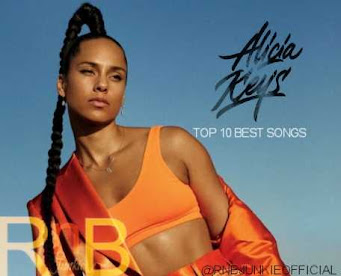 Fifteen-time Grammy winner Alicia Keys is the spotlight artist in our latest edition of Top 10 Best Songs. The multi-talented Songstress has been one of the most prominent and masterful voices of our time for the past two decades, releasing seven studio albums. We've compiled her top 10 best songs along with honorable mentions, so without further ado, we present... Alicia Key's Top 10 Best Songs.
10 Blended Family (What You Do for Love) ft. A$AP Rocky
From the Album: Here

Keys' most autobiographical moment in which she celebrates her stepson and family life in their 'blended' family. The song became a top 10 Billboard Adult R&B hit.

09 Like You'll Never See Me Again
From the Album: As I Am
Kerry Brothers Jr. co-produced this song about 'living every moment as if it's your last'. The standout song topped the R&B Singles chart.

08 Show Me Love ft. Miguel
From the Album: Alicia

This Miguel-assisted song topped the Adult R&B Songs chart and went on to be Gold-certified.

07 You Don't Know My Name
From the Album: The Diary of Alicia Keys

Co-Produced by Kanye West. This Gold-selling single peaked at No. 3 on the Hot 100's and topped the R&B chart and samples The Main Ingredients' classic "Let Me Prove My Love to You".

Released as the lead single from Keys' third album. This Grammy Award-winning song topped both the Billboard's Hot 100's and R&B charts.

05 Diary ft. Tony! Toni! Toné!
From the Album: The Diary of Alicia Keys

One of the standout songs from Keys' sophomore album. This Grammy nominated single peaked at No. 8 and No. 2 on the Hot 100's and R&B charts respectively.

04 Fire We Make ft. Maxwell
From the Album: Girl On Fire

03 Un-Thinkable (I'm Ready)
From the Album: The Element of Freedom

02 Fallin'
From the Album: Songs in A Minor

Considered Keys' signature song. This three-time Grammy Award-winning song topped both the Hot 100's and R&B charts and cemented her place as one the leading voices in Contemporary music.

01 If I Ain't Got You
From the Album: The Diary of Alicia Keys

Keys' secured a Grammy win with this standout Contemporary ballad which peaked at No. 4 on the Hot 100's & topped the R&B Singles chart.

"Goodbye"
"Butterflyz"
"That's How Strong My Love Is"
"Wreckless Love"
"Heartburn"
"Love Is Blind"
"Illusion of Bliss"
"Pawn It All"
Posted by Terrance at September 17, 2020