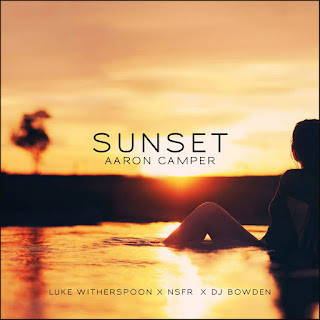 My interview with singer/songwriter, Aaron Camper. Hailing out of Salisbury, MD, Aaron Camper is a well-known explosive performer who is ready to share his music with the world. As the son of a preacher, he was exposed to the best music and performers from all genres. His musical influences and heroes are The Winans, Michael McDonald, Al Green, Marvin Gaye, and Phil Collins to name a few.

Terrance - When did you first fall in love with music?

Aaron Camper - I'd say I fell in love with music at a young age but not in the typical way. I wasn't goin around saying i’d be a singer or anything but I knew what I felt whenever I heard something new riding in the car w/ my dad. I'd say that sparked my initial interest.

Terrance - You have a buzz single out called, “Sunset”. Tell us about that and what you have in store for yourself?

Aaron Camper - Yes Sunset is out check NOW https://soundcloud.com/aaroncamper/sunset. Def a record I enjoyed making w/ Luke Witherspoon, DJ Bowden & NSFR so DEF check it out and let me know how everybody feels about it. I also have an EP that should be released before this summer called "B.L.O.W" (Better Left On Wax) that I'm very excited to share with the world.

Terrance - How did the song “Hypnotizing” come together?

Aaron Camper - It came together rather quickly...the music was already finished by my man DJ Camper and Tytewriter had the lyrics and melodies down so for me all I had to do was come in and express myself.

Terrance - Recently you were on tour with singer JoJo. What was that like?

Aaron Camper - It was a super dope experience, met newer, more beautiful people literally in the country that love music so the shows just clicked.

Terrance - You’ve toured with Justin Timberlake, Chris Brown, Jill Scott/Maxwell in various places of the world but if you could perform anywhere in the world you haven’t yet where would it be and why?

Aaron Camper - It'd be in the same exact places I've traced already with the great names I’ve been blessed to work with. The difference now is I'm equipped with music I loved being apart of creating and can't wait to perform. Not too many places that isn't a favorite to perform in now.

Terrance - You co-wrote a song called “Power” for Marvin Sapp’s Grammy nominated Thirsty project. What was it like to be part of that whole experience?

Aaron Camper - Ahh man that was so long ago, I remember it was quick how I find out and by then it was time to get on stage somewhere again. But I was honored for sure, very appreciative for that moment.

Terrance - As a songwriter, where do you draw inspiration from?

Aaron Camper - Oh inspirations everywhere...Life, my people, friends & situations but mainly I just draw from the music that inspired me mainly.

Terrance - How did you get involved with the theme song for The Queen Latifah Show?

Aaron Camper - My partner Adam Blackstone was working on another project he'd come across and figured the song would be perfect to try and pitch and thank God and (Dana Owens) liked it and decided to make the rest happen.

Terrance - Which do you ultimately prefer: Performing on stage or creating in the studio?

Aaron Camper - The studio has been a weird process to try and catch your stride over the past few years but now I think it's getting even. Normally the stage easy, but we're catching up in the studio.

Terrance - Do you consider social media fundamental to an artist career and independent music in general?

Aaron Camper - These days it's kinda linked in with the job, it's never been important until now really so it's not the end all be all, but necessary.

Terrance - Which artists are you currently listening to?

Aaron Camper - A lotttta good music out right now; I love King, Mark Ronson's always jumpin..I heard some of Disclosures new one and Emily King too..other than that it's all classics.

Aaron Camper - I'd say I'm a weirdo in that way becuz I've got my periods in every era that has affected my music in so many different ways. I'm just a student.

Terrance - How would you describe your overall artistry? Some say you’re Gospel, some say Pop, some say R&B, some say Dance.

Aaron Camper - Finally free man..I don’t know, that name game gets tricky but that's not my job right now. I create and you all help define where you all want it. I'm human I'd say I'm all those genres & things.

Terrance - What’s the one thing you would never do in your quest to achieve a successful musical career?

Aaron Camper - Sell myself short for a quick second at lookin like I made it with no real proven accomplishments. I think I just wanna earn mine at this point.

Terrance - At this point in your career, what has been the biggest achievement?

Aaron Camper - I think my entire journey has been points of frequent ups and downs. So much so there isn't too many one time moments. I haven't had enuff of those on my own..so we're creating now so that one day we can all sit back and truly recognize some bigger achievements.

Terrance - What’s the best piece of advice given so far about the business?

Aaron Camper - Jill Scott told me once "everybody can sing, but everybody's not honest." Realist s*** I've ever heard.

Terrance - Is there anything else you would like to leave our readers with?

Aaron Camper - Of course I always wanna say thanks to any of them out there who like what's been coming out lately, we're working diligently and moving precisely to make sure this music will sit well with you in every aspect of your day. And stay tuned!
Posted by Terrance at February 26, 2016