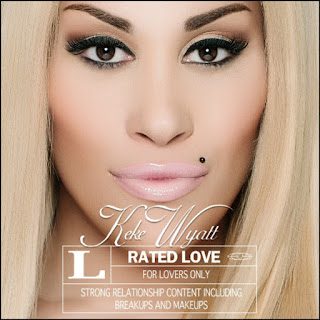 Terrance - First I would like to congratulate you on the release of your latest project, Rated Love. So far what has the response been like from the fans getting your new music out there?

KeKe Wyatt - Thank You!  The response from my new album Rated Love has been amazing. I really want to thank my old and new fans for all their love and support.

Terrance - What inspired this direction with the Rated Love album.

KeKe Wyatt - I will say my own relationship with Michael Jamar. I am all about love, but don't get it twisted you have to work at it. My album takes you through all the breakups and makeups that we ALL go through.

Terrance - What’s interesting is the album have no guest features which is rare in music today but also a good thing. Was that done intentionally?

KeKe Wyatt - Yes. It was time for my fans just to hear from KEKE.

Terrance - Can you share with us the backstory behind your newest single “Love Me”?

KeKe Wyatt - Chile, we were on the plane headed to some city for my show. Michael Jamar had gotten on my nerves so bad that day because he thinks that he knows everything. That song just came to me so clear on the plane. When I looked at him the words came instantly -- "Look at you Mr. Always know it ALL", and it went from there!!! I can't stand that man sometimes but I love him! LOL

Terrance - One personal favorite song from the album that people should look out for what would it be?
KeKe Wyatt - Shoot ALL of them!

Terrance - Well, there you have it (laughs). Now you formed your own label Aratek and released this project under it, so for those who aspire to create their own label what would you say are the challenges and rewards?

KeKe Wyatt - The challenges for me is ALL the money comes from YOU lol!  The reward is you get to create and sing the music that comes from your heart. No one will be telling you what you will be singing or recording because it is your label. The other reward is that you are investing into yourself and your future to live on the return for the rest of their life.

Terrance - There’s also a rising artist by the name of Kissie Lee on your label. Tell us how was she discovered?

KeKe Wyatt - I first met Kissie Lee in the studio during a couple of sessions.  I really liked Kissie's energy. We later became Bff's. I like to help people I believe in and I believe in my girl Kissie. So y'all go look her up right now. Kissie has two singles out available on iTunes!

Terrance - I know Faith Evans is a good friend of yours and you collaborated with her on her song “Make Love” what is it about her you admire?

KeKe Wyatt - Faith is the "First Lady" ok? Lol! She is a strong woman, artist, mother and still out here killing the game. That is what I admire about her.

Terrance - We always hear artists complain they were snubbed of a Grammy nomination so my question to you is, do you feel a Grammy is more important than any other award recognition?

KeKe Wyatt - Listen, don't get me wrong awards are cool and I appreciate them all, but personally I am not moved by all of that. I do this music because it is in my heart and it's my first love. I share my God-given gift for my fans and pray they are touched by my music. The awards that are exciting to KEKE are the awards I get in my email and social media when I see a fan say your music helped me through my cancer battle, or your music kept me through the loss of a loved one. This is what brings me joy. So, NO I don't feel like that because if it is a Grammy or any other award, what God has for you will be for you!

Terrance - What’s your regimen for preserving your voice before performing?

KeKe Wyatt - My regimen for preserving my voice before performing is ummm PRAYER! Other than that I don't have one... no seriously...

Terrance - With so many biopics on the rise if the opportunity presented itself to portray the great diva Phyllis Hyman would you consider?

Terrance - For years fans have been wanting to know will there ever be a collaborative album with Avant?

KeKe Wyatt - Well, we will have to see what thus saith the Lord lol! Only God knows the future. But right now, it's all about Keke's music, Rated Love. Go get It if you don't have it!
iTunes link:  http://flyt.it/KeKeRatedLove

Terrance - What would you say is one misconception about yourself?

KeKe Wyatt - That I am crazy. To be honest I am no crazier than anybody else, especially coming from the dark broken experiences and situations that God has delivered me out of. I realized I went through all of that to help someone else. If I have to be called crazy to help women who are getting abused and men get out of that situation, then I'll take it.  So when I hear or see people say that now it doesn't bother me at all. I tell them 'yep you're right, I am crazy but in a good ole fun, silly kind of way!!

Terrance - Lastly, could you share with us the deets about the Rated Love Tour?

KeKe Wyatt - Go follow me on IG: @keke_wyatt,   twitter: @kekewyattsings, FB: Official Fan Page Keke Wyatt  and I will keep you posted on all  Rated Love tour stops and upcoming shows.
Posted by Terrance at June 14, 2016