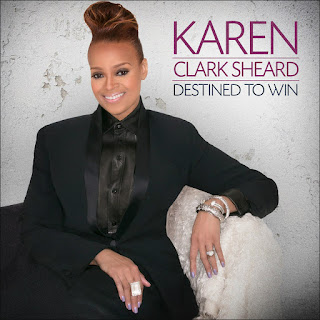 My interview with the Legendary Karen Clark-Sheard who is also one fourth of the premier gospel group The Clark Sisters. Destined to Win, her sixth album is available everywhere: https://itunes.apple.com/us/album/destined-to-win/id999885185

Terrance - The Clark Sisters were honored this year at the 2016 Essence Fest with tributes from an array of artists like Kelly Price, Brian Courtney Wilson, Ledisi, Yolanda Adams, KeKe Wyatt, your daughter the talented Kierra Sheard and many more so tell us what was that experience like and to still have such a huge impact on so many.

Karen Clark-Sheard - That was a great experience for us to be honored by such gospel and secular artists of their caliber, it was so encouraging to know and to hear from them how our music and ministry have impacted their lives. It really helped us to know what God called us to do.

Terrance - Your latest sixth album, Destined to Win, which has thus far been your highest charting album on the main charts why do you think that is?

Karen Clark-Sheard - I think maybe because Donald Lawrence and I connected and we had so much success with our collaborations on my very first CD and I believe fans were looking forward to the collaboration for so long. Donald is of course a phenomenal producer and does great work even for The Clark Sisters last record, so everything he touch with us has been a success and I think that’s why it did what it did.

Terrance - Artists say every song on their album is their favorite which is respectable but which stands out most to you on the album and why?

Karen Clark-Sheard - Probably the song “My God Is Big”. That song really ministers to me because of situations I’ve encountered and I just had to sing that particular song and it uplifted me knowing that my God is bigger than any problems or issues I’m having even with what’s going on in the world today and society. That’s one of my favorites because it’s a simple song with a simple message that both the Gospel and secular world can embrace.

Terrance - A few years ago your family were involved in the reality show The Sheards, if the opportunity presented itself again would you do it?

Karen Clark-Sheard - Sure. We were getting ready to do the second season and my husband is one of the Bishops on the COGIC board in our church and his schedule got so busy until he requested to put it on hold because he realizes it’s a great tool to help families and to do outreach as well so to answer your question if the opportunity presented itself of course we would walk back into it again.

Terrance - How are you able to balance wife, mother, first lady and artist?

Karen Clark-Sheard - I take it one day at a time because we promote families even at our Church we believe in having families stick together and having family values and making sure that we stay connected. I tell my children even though they are grown-up; my son is growing into manhood and my daughter is a lady, we are very adamant about staying connected because it’s easy for families to grow apart. Even with my husband, when I’m away I come home and make up for lost time because we can get so busy and disconnect. Even in the church the enemy is trying to attack families and marriages but of course we pray against it, you know? So that’s one of the things that help us stay connected. We come back home and minister so we can be example to the people so as a wife I try to do my duties when I’m home as much as I can and as a mother I stick to that and remain connected to my children so they know that I’m not just so into my ministry and don’t have time for them. That is a priority for me and trying to juggle all of those and being a first lady so I try to make up for it when I’m away. I come home and spend time with the people in my church and I enjoy that most of all.

Terrance - Next year marks the 20th anniversary of your solo debut LP, Finally Karen, at that time what was the transition like coming from The Clark Sisters to Karen Clark-Sheard?

Karen Clark-Sheard - I wouldn’t say I was fearful but we were such a family and that’s what my mother Dr. Mattie Moss Clark who was such a great woman promoted. She promoted us staying together and sticking together no matter what, and to even hear that I was breaking off to do my own solo album was hard for me at first because I am the youngest and my sisters used to always pretty much I guess be my leaders. I enjoyed singing with them and so my oldest sister Jacky warned me and told me when you become your own solo artist you really have to become your own businesswoman and make your own decisions and so you know all of that was another step to me and a whole different phase I had to walk in. When I saw the success on my solo record I was encouraged by God, he was letting me know that I’m with you and you can do this. Of course I learned the business, it made me tap into being a businesswoman and led me to now being my own entrepreneur of having my own record company Karew Records so that played a part as I was growing into my solo career but now i’m okay because I’ve learned so much from it. My sisters and I still come together to sing but I realized the solo thing was part of my destiny and what God wanted me to do so I fell right into it.

Terrance - Considering you’ve been around to witness the ever changing revolution of music specifically Gospel what’s your take on the genre and where it stands today?

Karen Clark-Sheard - I believe Gospel music has moved to a place now where it has been expanded and that it’s being accepted in more places than the Church. It’s in the secular world and I’m grateful to God that it gives us another platform to do exactly what God called us to do to because he said go out to the world and preach the Gospel and I believe that God has allowed even the Church world to be more I guess open to Gospel artists performing on secular stages because at one time it wasn’t but now they see that it’s a great tool for ministry and I see it expanding even more so I’m adamant about stepping into that opportunity we have now. You know we’ve been in the Gospel music for years and even though there are new artists coming up they are embracing our music back in the day now so it’s a great opportunity for us as well.

Terrance - I previously interviewed Faith Evans and she called you her Vocal Godmother so the question is why do you think artists on the more secular side of music like Faith herself, Kelly Price, Mariah Carey, Beyonce are attracted to your influences?

Karen Clark-Sheard - I believe it may be possible most of them started in the church and because I am connected to the church you know in my beginning stages and most of them are younger than me. Of course we all have a person we are influenced by or admire and to hear they admire my vocal ability that’s so encouraging to me because women of their caliber, their calling my name? I know Beyonce was once in a singing group [Destiny’s Child]. I heard Kelly Price and Faith Evans say they were in female groups before they got in the business so I think that’s what we all have in common and attracted them to me as well as my sisters it’s an honor to know they respect and admire us.

Terrance - And while we’re on the Faith Evans subject, what’s your thought on her acapella performance of “For the Love of the People”?

Karen Clark-Sheard - Oh she is phenomenal! First of all, Faith Evans is so gifted and to hear her sing that song was like Wow! Of course Twinkie was such an amazing songwriter and she was so relevant and to hear Faith sing that and bring it up to date was amazing and she did an incredible arrangement and didn’t take the melody out. It’s like she’s enlightening the next generation of people because you know they still love Faith Evans and she’s letting them know like, Hey don’t forget it’s where we got it from, and those types of women of their caliber do not have to do that. It’s a privilege she can take our old song and still sing it today you know? Even though it’s talking about God it doesn’t take away her having a personal relationship with him so that really blesses me to know that she loves God.

Terrance - It’s interesting because now with the impact of social media if a newer generation of artist covers an older song people research the song that it originates from and discover it.

Karen Clark-Sheard - Right and that’s why I’m saying by Faith singing that people are going to ask, where did you get that song from? That’s how our name is carried down in the next generation because sometimes I ask young people at the ages of 20 how you know about us or what you know about The Clark Sisters? They look at me like, Please, of course we know them because of people such as Faith Evans so it’s amazing they’re still keeping our name alive even with my daughter it’s a blessing.

Terrance - In reference to your daughter Kierra Sheard who was first introduced to us on the song “The Will of God” at the age of 10 and has since become an artist of her own, can we expect a Mother/Daughter collaborative album in the future?

Karen Clark-Sheard - Oh Absolutely. We have already talked about putting an album together and it may be in a couple years from now.
Posted by Terrance at August 14, 2016