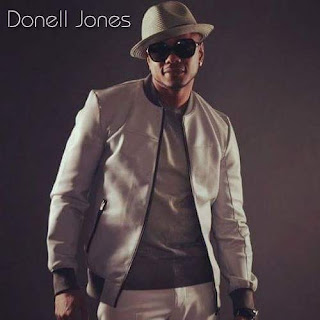 My interview with R&B recording artist, producer and songwriter Donell Jones who has brought us hits such as “U Know What’s Up”, “Where I Wanna Be”, “You Know That I Love You”, an impressive Stevie Wonder remake of “Knocks Me Off My Feet”. Check out his newest single and video “Never Let Her Go” https://www.youtube.com/watch?v=Ju_JSr_nkV4 which features David Banner from his forthcoming eighth album.

Terrance - This year marks 20 years since you’ve been in the business, so far what do you consider the highlight of your career?

Terrance - Tell us about the new single “Never Let Her Go” and it’s backstory.

Donell Jones - The new single Never Let Her Go is based off a song I did a while back on my second album, Where I Wanna Be, called Have You Seen Her, and basically the song is about me seeing her after sixteen or seventeen years and she still looks beautiful and she got away that time but I’ll never let her go this time now that I got her back in my life.

Terrance - David Banner makes a guest appearance on the song what was that collaboration like?

Donell Jones - Hooking up with David it was incredible man. We seen each other going up Stone Mountain we exchanged numbers and we were like let’s work together so when I made the beat I sent it to David and he jumped on it just like that so I felt it was meant to be.

Terrance - Introduce us to your forthcoming eighth album you’re working on.

Donell Jones - I’m definitely in the lab right now I don’t have a name or date for the album or anything like that and I’m just working at my pace so I really can’t discuss much about it but definitely be on the lookout for some new music soon.

Terrance - Would you say it’s more or less challenging being an independent artist as opposed to the major label system?

Donell Jones - I think being an independent artist is great. There’s a lot of opportunities that come along with that but you have to get out there and make them happen yourself. I also think it’s incredible to be with a major label you know you don’t have to do as much work, they handle all the business and make things happen for you a lot faster so there’s pros and cons with both. I wouldn’t say I would choose a major label over an independent or vice versa I think they both have their benefits. For me it’s all about the music.

Terrance - Do you think there’s any validity when people say R&B is dead?

Donell Jones - When people say R&B is dead I don’t believe that I believe you know it’s just music. These young guys are taking it to another level and I may not like the subject matter they’re talking about but some of the music I love. When I was coming up the older guys didn’t like what we were doing so it’s evolution, things change and it turn around and come back so I appreciate the things the younger guys are doing not so much the subject matter but just the music and the ability to become entrepreneurs. I love that fact.

Terrance - We’ve seen LSG and TGT come together for collaborative projects, if the opportunity presented itself what two male artists would you work with?

Donell Jones - If there were two other males I would work with… to be honest with you, I mean I love all the guys I came up in the business with I wouldn’t even pick two I would just you know if something was to happen I’d definitely have to think about it because I’ve been a solo artist for a long time and hooking up with two different people, two different personalities may be a little difficult because I’ve been in a group before and I know how the dynamics of a group can be with people having different ideas and things like that so I don’t know. It definitely wouldn’t be something I would do for a long time it would probably be a one-off but I would consider it though but I don’t have anyone in mind I would do it with.

Terrance - Talk to us a little about your first independent project a few years ago called The Lost Files and the initial vision with it.

Donell Jones - I wouldn’t really call my first independent an independent it was just a bunch of songs that I had did in the past that hadn’t made any of my albums and they were just sitting on my computer so I just decided to put it out on iTunes. I really didn’t promote it I just told my fans on Twitter that I had some songs and people went out and supported the project and it turned out great, it was just something sitting around and I had an idea and just put it out.

Terrance - People say you’re underrated as an artist so the question is, do you think you were somehow in the shadows of TLC, Usher, Toni Braxton, who were also LaFace Records recording artists.

Donell Jones - I loved being on LaFace because of what they stood for. I was very inspired by Babyface as a youngster coming up and also L.A. Reid. I think in any record company when you have the caliber of artists that they had on that particular label most of us would say we got overshadowed but at the same time I still got what I needed out of the label. They still supported my projects, made sure they got listened to. I didn’t become a superstar like the mentioned artists did but at the same time people still know who Donell Jones is because of LaFace Records.

Terrance - Take us back a little to how “U Know What’s Up” was conceived.

Donell Jones - I didn’t write that record so I really don’t know how it came about I just know that Eddy F. and his team got together and wrote the record. It wasn’t really called U Know What’s Up then, the first draft of the record was called, When You Hear the Car Horn Blow, and when I heard that particular part of the song I didn’t like it at first so they went back and changed it and they came back with the second version called U Know What’s Up and I was still a little skeptical about it because I was still thinking about the first version I had heard but after I laid the song down and listened to it a few times I fell in love with it and it became one of my biggest hits.

Terrance - What was it like working with the late great Lisa “Lefteye” Lopes on that song?

Donell Jones - Working with Lisa was incredible, and she really took my career to another level by jumping on that record and appearing in the video. It just shined the light on me and people started to pay attention to what I was doing. I mean, just somebody with charisma man and her personality stood out. I don’t think TLC would be TLC without Lisa being in that group that’s just how much of a great spirit she was.

Terrance - Also known for affectionate love ballads like “Where I Wanna Be”, “Yearnin”, “Do U Wanna”, “No Interruptions”, do you see ballads making a comeback?

Donell Jones - I see ballads definitely making a comeback and taking over. We don’t have love music anymore you know when it’s time to get that romance going with your girl you don’t want to be playing a rap record. I feel like that’s why people play dusty’s and go back and listen to older music because it gave that sense of wanting and needing love but I think ballads will definitely make a strong comeback but it’s not just about the slow music it’s about the lyrical content too. I think that’s what people are missing great lyrics with great music.

Donell Jones - If music wasn’t my profession… I don’t know, I mean all I’ve ever thought about was music so I really can’t answer that question because it never crossed my mind what else I would want to do. It’s just music. I find myself doing it everyday. It’s still my first love and I don’t see that changing.

Terrance - Where can the people reach out to you in social media?

Donell Jones - I’d just like to thank the fans for supporting me throughout the years and just for rocking with me and appreciating my music and I just got more to offer and I appreciate them for what they’ve done for me. Thank you.
Posted by Terrance at October 16, 2016