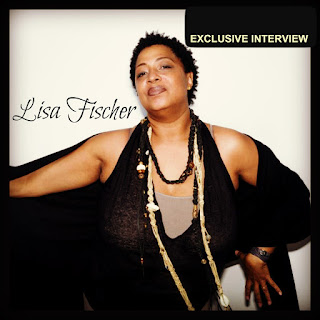 Grammy-Award winning songstress Lisa Fischer best known to the music world for her breakout classic, “How Can I Ease the Pain”, returns with a new tour Ms. Lisa Fischer & Grand Baton. Lisa also shares how she got signed to Elektra Records to record her debut album So Intense and why there wasn’t a follow-up album and much more...

Terrance: First talk a little about your earliest musical beginnings and when did it all come together for you.

Lisa Fischer: Oh wow! Musical beginnings. Well, there was always music in my house. My parents were young parents and they loved Nat King Cole, Ella Fitzgerald, Morgana King, Al Green, The Staple Singers to Melba Moore, so we had all this music and they gave me their old 45s and record player when I was very young and I was just so into watching the record go round and round (laughs). I sang in School and in Church and then when I graduated I ended up going to a Music and Art high school and after that I went to Queens College because I wanted to be an Opera singer and then I started working in Clubs just doing top 40 gigs which were the popular songs on the radio at that time. After that I just started to get to know people and they would ask me to do little demo sessions either at their home or recording studio and one thing honestly would lead to another. I was looking through a newspaper and I seen an ad to audition for The Crystals and I did and I met ‘Dee Dee” Kenniebrew who is one of the original Crystals and that was my first time crossing water and going on tour and from there I worked with a version of The Marvelettes and from that I met the choreographer who knew Luther Vandross and asked if I wanted to audition for Luther. I would say The Crystals and The Marvelettes were beautiful and wonderful experiences for me but Luther was a different situation that led to working with Chaka Khan so I would go back and forth working with Luther and Chaka Khan. Then I auditioned for Mick Jagger who had a solo tour and that led to working with the Stones when the Stones got back together the following year.

Terrance: Cool. I know you toured with Tina Turner as well.

Lisa Fischer: Yes. They were looking to replace Gloria Reuben because she had this TV show thing she was getting ready to do so luckily for me that opportunity became available and so I worked with Tina Turner on a few tours and that was so exciting because she’s so amazing. Life has been beautiful and I just try to follow the path and I enjoy it very much.

Terrance: How did you get signed to Elektra Records that led to recording your debut album So Intense?

Lisa Fischer: I got signed to Elektra in 1988 and it was because of Luther. He was kind enough to share his management with me. His manager name was Daniel Markus, a lovely, lovely man who worked for Alive Enterprises out in California as well as the owner Shep Gordon. They managed Luther and at the request of Luther, he asked them to manage me and I was very excited about that and Daniel worked out a deal with Bob Krasnow who signed me and I was just so excited and didn’t know what to expect and having a record deal for me was a gift and an opportunity to be heard especially back then. But yeah, because of Luther and his support, love and belief in me.

Terrance: That’s awesome. So your breakout song, “How Can I Ease the Pain” was climbing the charts. Did you think it would go as high as it did?

Lisa Fischer: I was just so shocked and thankful. How can I explain this? You never know what’s in store so you do what you love and you do it the best way you can and then after that you just let go and hope and pray for the best. I just couldn’t believe how fortunate I was with how people resonated with the music and I am very thankful. It also had a lot to do with Narada Michael Walden who was and is an amazing songwriter and producer and I’m lucky Carole Childs who was A&R at Elektra sought him out and made it all happen.

Terrance: “How Can I Ease the Pain” was at it’s height, won a Grammy award and then it all stopped. Did it all become too overwhelming?

Lisa Fischer: I think I would have done another record but for some reason it just wasn’t in the cards. I was working on a second record and it was taking me a while and management was helping and doing everything they could. We were working with different producers and different songwriters and Elektra was going through a lot of changes and instead they became Warner-Elektra-Atlantic (WEA) and so it became what I call the beginning of the downsizing and so things just didn’t come together in the way they should’ve and at the time they should’ve I guess. I ended up trying to change labels and left WEA thinking I had another record deal and the people behind me decided they weren’t going to sign me and then I had no record deal. It was just so heartbreaking to me and I was like, you know what? I’m just going to continue singing background and doing what I do.

Terrance: Who are some artists in today’s music you’re listening to?

Lisa Fischer: I love Laura Mvula and she has a song that kills me called, “Sing to the Moon”, that’s one of the most beautiful pieces of music I’ve ever heard (laughs). There’s another young lady named Imani Uzuri who has a song called, “Sun Moon Child” and it’s such a great record that I just love. I love Esperanza Spalding I think she’s amazing. There’s also an artist by the name Niki Darling and my niece is actually singing background on the record. It’s called, “End of the World” and the background is just freakin’ awesome and I’m so proud of her.

Terrance: Talk about the Lisa Fischer & Grand Baton tour and what concert-goers can expect.


Lisa Fischer: Well, they’re expecting myself and three other musicians who I adore. The way that they play and know each other is just magical for me because of the way they listen to singers and the way they listen to each other. It’s very meaningful and spiritual to me to speak to them in this musical way and to have the audience witness that and be a part of it.

Terrance: Many people ask the question, will there ever be new Lisa Fischer music in the near future?

Lisa Fischer: We’re playing around a lot in the studio, but after not having a record deal for so long I didn’t feel the need to rush. I wanted to make sure whatever we put out in the universe is honest and feels right, you know? So we’re working and experimenting and those kind of things takes that kind of time but we’re definitely on that path and look forward to sharing that music with everyone.

Terrance: I personally look forward to that. In closing, is there anything else you would like to add?

Lisa Fischer: Just how amazing you are (laughs). For taking the time to talk and ask questions and how they were asked! I really appreciate it. Thanks so much.