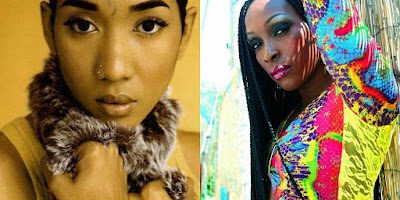 The 1990's was a pivotal moment for these two female artists. They were standout amongst the pack while all the other female artists were being polished as the next Whitney Houston, Janet Jackson or Mary J. Blige on the scene.

Diana King's first major music appearance came in 1993 when she recorded a cover of Bob Marley's, "Stir It Up" for the Cool Runnings soundtrack. Two years later, she would release her debut album, TOUGHER THAN LOVE which resulted in grooves obliterate distinctions between reggae and R&B, harking back to the bluesy rock-steady sound of the '60s while honing the cutting edge of today's hip-hop-oriented soul. What's more, the album showcases one of the most gifted female vocalists to emerge from Jamaica in memory. Diana King has the potential to penetrate inter-national barriers with a voice that cuts straight to the heart, crooning, rapping and belting her passionate message in the universal language of love. A follow-up album, THINK LIKE A GIRL, released two years later.

What are your favorite songs by Diana King?


Patra burst on the scene in 1993 as well with her Gold selling debut LP, QUEEN OF THE PACK that spawned several chart topping hits and by 1994 the album had spent 13 consecutive weeks at #1 on Billboards Top Reggae Albums chart -- the longest run at #1 in the history of the chart. In addition to her own album, Patra embarked on successful collaborations with C&C Music Factory ("Take A Toke") and Gurus Jazzmatazz II set ("Young Ladies"), as well as joining in the all-female superstar recording "Freedom" for the soundtrack of Melvin Van Peebles film Panther. A follow-up album, SCENT OF ATTRACTION, came two years later which feature the premier single and video "Pull Up To The Bumper," the Grace Jones club classic. "I did 'Pull Up To The Bumper' because it's a sexy song and I think it matches my image," says Patra. "Also, Grace Jones is a Jamaican woman and someone who I personally admire a lot. I changed a lot of the lyrics in the song and added my little Jamaican spice to it."

What are your favorite songs by Patra?
Posted by Terrance at January 13, 2019