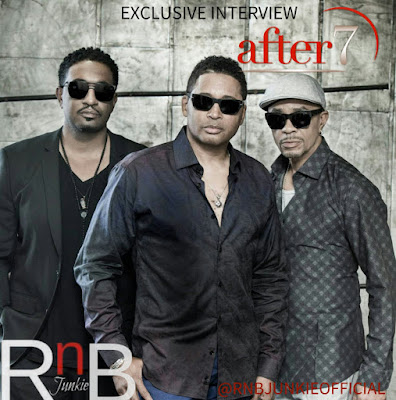 30 years ago this year, Grammy nominated R&B vocal trio AFTER 7 burst on the music scene with their self-titled debut album which produced the #1 singles “Ready or Not”, “Can’t Stop” and the top five “Heat of the Moment”. After two more successful albums (Takin’ My Time and Reflections), the group went on a hiatus to focus on solo ventures and in 2016 returned with their fourth album Timeless earning five top 10 singles. I caught up with founding members Keith Mitchell and Kevon Edmonds (brother of Babyface) for an exclusive to discuss the 30th anniversary of their debut album, the resurgence of groups, the “Timeless” project and much more…

LISTEN TO THEIR LATEST BABYFACE AND DARYL SIMMONS-PRODUCED SINGLE, “IF I”


TERRANCE: The past few years has been a real successful comeback for you guys with the Timeless album. What do you think attribute to that?


KEVON: Well, I think it’s a combination of things quite honestly. I think us staying true to who we are, being authentically who we have been. There’s been a thread of continuity from the sound that we had in the early 90’s to now. Maybe a fresher approach but I think also in addition to that, I think it’s a reference to the music that’s been missing in the marketplace and I think with that R&B has taken another turn and afforded us an opportunity to have a second shot at reintroducing you know what it is we do.

TERRANCE: Is there another single coming from this album or have you guys started plans on new music?

KEVON: I think what we are doing now is really kind of giving radio and our listeners an opportunity to breathe. It’s kind of like a release for a moment. We don’t want to beat you up with After 7 music non-stop continuously. We’ve basically done that for the last three years, so I think it’s time for our listeners to have a breather and let whatever music is going to be introduced be introduced and I think at some point in time we will get back into the studio and begin to figure out how we want to approach the next round, but for now I think it’s about us performing the music they’ve come to know from our past catalog and also with this album being part of our catalog.

TERRANCE: At one point, singing groups were booming, then they disappeared and now there’s been an ongoing resurgence again, most recent B2K. What do you think caused this renewed interest?

KEITH: I think it’s just a return of what goes around, comes around kind of thing. Right now, the music airwaves is filled with female vocalists and female artistry. It’s pretty much dominated by female artistry, so it’s a fresh opportunity for groups to come back and find a unique space for their sound and for radio to bite into because radio is a difficult beast once they get locked in on something, they stay there. It was a lot of work for After 7 to recast itself back into the music place and get the kind of support that we got. There’s a window of opportunity for groups to come back. You really gotta have the right music and saying the right things in order to make a statement because the climate has changed. I’m really excited about the men that are trying to come back and the singing group concept, because it’s pretty boring to be a man and all you can listen to are women.

TERRANCE: This year marks the 30th anniversary of After 7’s self-titled debut album. What do you remember most about those sessions?

KEVON: It was exciting and it was all brand new. Having been in the studio before, but never as a collective group and unit that was recording on a professional level. It was new music created specifically for us by L.A. and my brother Face. It was an unforgettable experience, you know? To go from being in the workforce one month and in the next month you’re out in California. From the midwest to sunny California, not punching a clock and nobody telling you where you’re supposed to be and this, that and the other. It was just a whole new life.

TERRANCE: Do you have a favorite song from that album or one you think was underrated?

KEITH: From that debut album, there was nothing that was really underrated. I think there’s a song that should’ve went to the top of the charts which is a song called, “One Night”, but it didn’t become a single for the political reasons in terms of the record company, but other than that we were very proud of the body of work that we created on the album and we were very well received and I think Babyface, L.A. Reid and Daryl Simmons were determined to put a stamp on us and that would give us the legs to break into the industry and that’s what happened, so there’s no regrets and there’s no disappointments.

TERRANCE: What are some things you guys do when it’s time to disconnect from the music?

KEVON: If we’re not out there on the road or if we aren’t in the studio, even when we recorded this last studio album, real life was happening around us. It wasn’t like, okay let’s take the time out pretty much and record. Life has changed and it’s almost like you don’t disconnect. It’s all part of the same thing. You do what you gotta do so you can do what you want to do. We take care of business and take care of our families so we can come out here to do what we love to do.

TERRANCE: Talk about your upcoming shows or special events.

KEITH: Well, for 2019 we will be doing a variety of shows across different cities in the United States. Some have been booked and others haven’t been booked, but we look forward to always adding content to our live shows and changing things around to enhance the people who have followed us continually over a series of years. We always want to give the fanbase who want to know a little bit more and what they might have seen in the past and the fact we have five top 10 singles and branding it well into the show and being able to go back and add all of that content from successful singles we’ve had in the past. It keeps it exciting when we add things and keeps us enthusiastic about delivering that music and the shock value that it throws back at your fanbase, so we’re excited to get back and change a few things.

KEVON: I might add to that, we’re continuosly tweaking and trying to refine and improve and figuring out ways to make our shows better. Better than the last time you saw it, so we’re always striving to reach higher levels of excellence if we can and never settling is where we’re at with that.

TERRANCE: Overall, what are your top 3 favorite songs to perform?

KEVON: For me “Ready or Not”, “Can’t Stop” and “Nights Like This”. All good songs that are good energy, I think.

TERRANCE: If there’s one thing about life that you know for certain to be true, what would it be?

KEITH: There’s a love for God and understanding the word of God and how it applies to you as an individual to your spirit and getting closer to that spirit because as you get older, you get more wisdom and you get more understanding. You understand the truth about who you are with your relationship with God and life. That’s the core and that’s the root. Bam! Right there in the middle.

KEVON: And I concur (laughs).

KEVON: We look forward to continuing to do what it is we love to do which is the live performing aspect. Of course we love recording and creating new music, but there’s nothing like having the opportunity to take the music before those people who spent money and who are fans who’ve supported you and to be able to give it back to them in a live environment. We look forward to that always because it allows us to really, really connect with our fanbase and so that’s what we’re looking forward to this year. We’re continuing to do what we have been doing which is stepping out there on that stage and making every effort to give our best show every time that we do.
Posted by Terrance at February 16, 2019