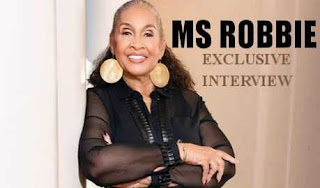 Robbie Montgomery affectionately known as Ms Robbie has had an extraordinary life. From being one of the original Ikettes in the Ike & Tina Turner Revue in the 1960's to assisting background vocals for Stevie Wonder, Barbra Streisand, the Rolling Stones and Joe Cocker to creating the Sweetie Pie's franchise and starring in the award-winning reality series 'Welcome to Sweetie Pie's' on the Oprah Winfrey Network. An icon of both soul food and soul music, Ms Robbie has returned to her roots, performing and recording, with her latest release "Ain't My Stuff Good Enough" on all digital platforms.

TERRANCE: What's a typical day like for Ms Robbie?

Email ThisBlogThis!Share to TwitterShare to FacebookShare to Pinterest
Labels: #msrobbie