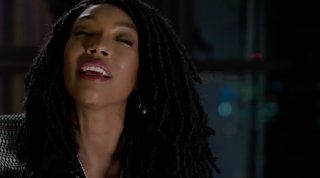 Brandy who stars as Naomi on ABC's all-new series Queens has released the single to her acoustic guitar-driven ballad entitled "Hear Me" to all digital platforms.

The heartfelt and personal ballad touches on Naomi's estranged relationship with her daughter.

Queens which airs Tuesdays at 10/9c on ABC, follows the lives of a fictional hip hop group who reunites for a chance to recapture their fame and regain the swagger they had in the 90's.