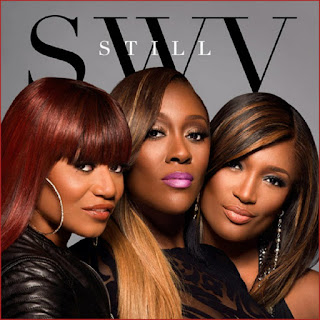 The new SWV album, Still, which serves as their fifth project is available in stores and online now.

Terrance - In the last episode of SWV Reunited we’ve seen you Taj struggle with vocal issues and the group’s shift in managerial changes from Cory to Max Gousse. Fast-forwarding today, your voice has recovered and there’s a new manager by the name of Brooke Payne. Tell us how did this all come full circle?

Taj - It's really simple. During SWV Reunited we had a shake up with Cory where we replaced him with Max Gousse in an attempt to pick up the pace for SWV. Unfortunately, It didn't work out the way we had anticipated with Max. At that point, we turned to a tried and true mentor, Brooke Payne. We needed him to come in and clean up the basics before we could move forward. Basics meaning, stage show, immediate business accounts and loose ends as far as completing the album was concerned. Now that all of that is done we're ready to move forward.

Terrance - Did you all go in the studio with a direction in mind for the Still project or did it emerge once you started working?

Taj - Yes. We decided to name the album first. We decided to call the album "Still" because it describes SWV's last quarter of a century perfectly. After all of the ups and downs, the highs and the lows, we're STILL here doing what we do as the original three, well!

Lelee - Well we always have a team meeting to discuss the direction of an album. For me, I felt like vocally we were still there and didn't have much to prove in that department ,so with this album, I wanted us to have a little fun and take chances . I believe we accomplished that with "Still".

Terrance - The lead single “Ain’t No Man” and “M.C.E. (Man Crush Everyday)” have been making quite a buzz. Will there be a music video for “M.C.E.” or are there plans for the next single?

Lelee - I hope so. I guess if the fans stay excited enough we'd do a video.

Terrance - Is there a personal favorite song from the album?

Lelee - Mine is "Ain't No Man".  Lyrically I feel it's a beautifully written song. Everyone wants their man to be the best. He may not be perfect but he's perfect for you.

Taj - I really love them all but my super favorite is "On Tonight."  It reminds of Bruno Mars!  I love his vibe. I would love for him to do a remix on that song. It would be so dope!

Terrance - What’s the experience like to incorporate the new songs into your setlist for your performances and people know the words?

Lelee - It's a tiring process because we have to actually rehearse HARD and possibly take some of the old songs out, which i don't like doing all the time because you become attached to some of those songs.

Taj - Anytime the audience sings your songs is such a blessing. I get amped up anytime I hear the audience say my name. I almost explode when they sing the actual song.

Terrance - We always hear artists say they are bored or tired of performing a particular popular song in their catalog but know fans want to hear it. Has that ever been the case with you all?

Taj - Look!  It's not everyday an artist that's been in the business for as long as we have, and still touring as much as we are, can say that they are doing what we're doing. We don't mind singing any of our hits!  Not a problem at all Boo!

Lelee - Not for me most of the time. But if I had to chose one it would have to be "Right Here". That song is so boring to me performing it (laughs). But the fans love so that's all that matters.

Terrance - After the third album, Release Some Tension, the group broke up and went your separate ways but did that ever at any point affect your love for singing?

Lelee - Not for singing, but the business of singing maybe. I was so detached from the industry and the people in it. I had to find myself because I was so caught up in what people wanted of me and my marriage to SWV. I had to figure out the hard way that I wasn't just a singer and there was so much more to life than holding a mic to sing. I can hold it now to just talk and speak to people through a transparent lens.

Taj - You never lose your love for singing. You might not sing those songs as much. But you always love doing what you're passionate about.

Terrance - Looking back from where you all started til now what have you witnessed in the music industry both positive and negative?

Lelee - You can hardly find someone that's real. Those who are close to you have motives. They either love you or love who you're connected too. Fans make my day always. They brought us here in ‘92 and we're still here in 2016. You have to watch your business and not give ANYONE complete control ever!!!!

Taj - Positive: I've witnessed my life change in an instant with one hit record. We went from completely unknown to everyone's Best-friend overnight. Being able to experience your wildest dreams so young was amazing. Negative: When the industry turns on you its like a nuclear heartache. The boyfriend that once loved you now tells you you're not good enough. No matter how hard you try to be the best you can be for him.

Terrance - Thoughts on the girl groups who started out when you all but aren’t around anymore.

Lelee - Hey it happens. It's a season for everything. It's just hard for groups period to stay around either because you can't get along or the music you putting out is wack and the label will drop you. It's hard to recover from that.

Taj - It's unfortunate that the girl groups have faded. We, meaning girl groups, were dominate in the 90s!  The guys looked at girl groups as competition back then. I'm not sure what happened but it can't be too late to bring the glory back.

Terrance - For the hardcore fans can you explain why you all were not on the single/video version of “Slow Jams” that featured Babyface, Portrait and Quincy Jones?

Taj - I believe Quincy Jones signed Tamia after we had recorded the song. He needed a hit record to introduce his artist. It's business. She was amazing on the song. It launched her career.

Lelee - I have no idea. Maybe they didn't wanna pay for our flight (laughs).

Terrance - Are there any personal favorite unreleased songs or songs you all thought should have been singles but the labels went against?

Taj - My favorite unreleased song right now is "The Best Years" off of our 2012 I Missed Us album and "When This Feeling" off of our New Beginning album. My favs.

Lelee - A gang of them!! Back in the day they made the right choices except for the Release Some Tension album. They soaked up our budget for nothing. This album STILL, I thought "On Tonight " should've been second single.

Terrance - What are your thoughts on this generation of artists sampling and covering your past work?

Taj - It's an honor!  It just lets you know that you're doing a good job. Well enough to be sampled and covered years after your glory days.

Lelee - I love it, too bad the only ones reaping the benefits are BMG and Brian Morgan (laughs).

Terrance - If you all could go back and correct one thing either creatively or internally within SWV what would it be?

Taj - I would want to go back and find the perfect manager first. I think that was our first misstep. From there it was downhill.

Lelee - None of us would've had outside influences.

Terrance - Are there any goals you all would like to fulfill outside of music?

Taj - I want to do more songwriting and I'm going to produce a successful sitcom. Doing it!

Lelee - Absolutely, I fell in love with television in front and behind camera. I'm developing shows now.  My dream is to open up a transitional home for teen and single parents as well as do a jazz/ blues EP. Being an author is on my list as well.

Terrance - Thus far what has been the highlight of being in SWV?

Lelee - The fans of course and everyone who loves us. I appreciate genuine people. Also, Working with two of the most amazing and talented women anyone could ask for. We've been through a lot but it was that darkness that strengthened us as a group and individually.

Terrance - Any final words for the readers?

Taj - Thank you for being there for us for so long!  We are nothing without you guys‼️

Lelee - Thanks for reading, caring, following, supporting, helping us in our efforts to bring light to sisterhood in this crazy industry.
Posted by Terrance at February 26, 2016