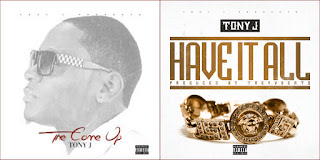 My interview with Bronx native singer/songwriter Tony J who captures in it’s purest form the essence of being an artist. His debut EP, The Comeup, is available at Amazon: https://www.amazon.com/gp/product/B013WUEXWK?ie=UTF8&*Version*=1&*entries*=0, iTunes: https://itunes.apple.com/us/album/the-comeup/id1030216938 plus check out his latest single “Have It All” https://soundcloud.com/tony-j-3/have-it-all

Terrance - Tell us when music became your passion.

Tony J - Wow music became my passion when I was about 10yrs old when I watched Michael Jackson’s "Moonwalker" movie. I just remembered me staring at the TV in amazement of how exciting it was. It was like magic and I knew that I wanted to do that. I wanted to create magic.

Terrance - How much influence does your native The Bronx have on your music and overall sound?

Tony J - The Bronx plays a major role on my music and sound it’s all part of the culture. I grew up in a neighborhood where everyday wasn’t a good day and everyday wasn’t a bad day either but the balance of that helped me to write about what I seen or even been through and I carry that emotion in my music.

Terrance - What artists had a strong musical effect on you?

Tony J - Usher had a major musical effect on me. I watched him since I was a kid and seen how he evolved and didn’t allow himself to stay in one box but he ventured off into other genres of music and created his own sound. His performances were outstanding and that’s where I got a lot of my stage presence from by watching him. He is the king of R&B, there is no other person to be inspired by.

Terrance - In getting your career up and going has there been anything that made you nervous?

Tony J - There has been plenty of things that has made me nervous on this journey to gettin my music career up and going and that’s normal. Those nervous moments is what helped me to push harder and be greater. I have done plenty of auditions and performed at numerous shows and I still get nervous, just like when I performed at the Apollo Theatre in 2004 for amateur night and didn’t win, even though it hurt me like crazy to hear boos I went home and practiced everyday until I felt I was ready to go back. I auditioned again in 2006 and passed the audition and this time I came in 2nd place and was offered a spot on the tv taping for "Showtime At The Apollo" who was hosted by Mo'Nique at the time. But nerves are good you should never get too comfortable that’s when you start to slack.

Terrance - What would you say is your target market?

Tony J - My target market is anywhere from teens and up. My music is for everyone no discrimination (laughs).

Terrance - Last year you released your debut EP, The Comeup. What was that recording process like?

Tony J - Recording my EP The Comeup was a great experience for me. That is a project that was in the works for a long time, it was nothing rushed or forced I just allowed the songs to come to me naturally and finally I felt in my heart that it was ready to be released. The Comeup is my baby I don’t care what other projects I create The Comeup will always be my baby (laughs).

Terrance - What’s your personal favorite track from The Comeup and why?

Tony J - My personal favorite track from The Comeup is "Overtime" it’s smooth and sexy and very catchy. I really love performing that song as well, I also had a great time shooting the video for it which is available on youtube.

Terrance - You have a new single “Have It All” out now. With it’s profound meaning was that song written from a personal perspective?

Tony J - My new single "Have It All" was definitely written from a personal experience as well as other situations I have witnessed. A lot of people don't know that "Have It All" is deeper than they think. It’s about a guy who is trying to give this girl the world but she is stuck inside a abusive relationship she really wants out of but she is scared to leave. Something I had to deal with in my past it’s a very difficult situation to be in especially when you really love this person. I really can’t wait to do the video to "Have It All" so people can get the whole effect.

Terrance - Tell us about the other new music you’re working on.

Tony J - Currently I’m working on an album which I’m very excited about being that I have a lot of new experiences to talk about. I haven't set a release date but in the meantime I will be dropping some singles and a mixtape.

Terrance - What’s the typical creative process you go through when making music?

Tony J - When I’m in the process of making a new project I try not to force it and just let everything come natural. I have to be alone when I’m writing and a lot of my songwriting takes place in my bathroom (laughs). The bathroom is like my home studio some of my greatest songs were written in the bathroom. I also like to perform the song as I write it. Kinda weird but it helps and works for me.

Terrance - How important is it for you to have complete creative control in all areas?

Tony J - It is very important that I have complete creative control over my music because nobody can deliver your emotions like you do. Even in the studio i’m very hard on myself, there have been times I spent 30 mins just singing one line until it was the way I heard it in my head. Nobody can hear what you hear it’s my job to take control and express myself the way I want it to be delivered.

Terrance - If you could collaborate with any artist or producer that’s out now who would it be and why.

Tony J - If I could collab with any artist or producer out now it would have to be Timbaland and Usher, Timbaland as producer because I love all his work he knows how to step out the box and create new sounds. His work stands out amongst everybody else and that’s what I want my music to do. Usher as the artist because I have watch his career since I was a kid and his artistry is just incredible. He is another person who has no boundaries and is not afraid to step out the box, his music is classic and timeless and that’s what I intend to do. I always called Usher my brother from another mother (laughs).

Terrance - How will you effectively get your music out there to the people?

Tony J - I will effectively get my music out there to the people by just continuing to do what i’m doing and never giving up taking every opportunity that comes my way and taking full advantage to reach the people. Continue networking, doing shows, and most important staying current and true to myself all at the same time. I think people connect more with genuine artist who just stay true to who they are.

Terrance - What are your thoughts on where R&B stand today?

Tony J - That’s a good question, my thoughts on R&B today is it can be better. If we are gonna change the sound of it let’s stay true the emotion and the feeling of what it’s really suppose to be. It is supposed to touch the soul and move the heart and honestly there are some artists out now saying they are R&B and I don’t get that feeling at all from their music, not saying that their music sucks but I think they need to do their homework. Now we do have artists like Tyrese, Tank, Usher, Chris Brown, Brandy , etc who still have that true R&B essence.

Terrance - It’s interesting you say that because there are people who say Sam Smith, Adele and Ed Sheeran are the new faces of R&B. What’s your take on that?

Tony J - Sam Smith, Adele, and Ed Sheeran to me are considered  POP/SOUL which is kinda the new era of R&B, all 3 of them are great artists who make dope music and I would love to work with them especially Adele she is amazing.

Terrance - In 10 years what kind of music do you want to be known for?

Terrance - What philosophy do you live by?

Tony J - I have always lived by the quote "If At First You Don’t Succeed Try Again" because there will always be falls and setbacks along the way but giving up should never be an option. Get up and keep going and make your dreams come true. The world is waiting for me!!!!!

Terrance - Where can our readers follow you on social media?