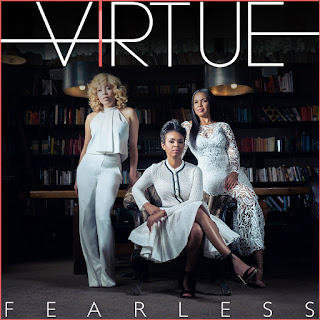 My interview with Karima Kibble; the lead singer and founder of the legendary Gospel group Virtue! Back with their sixth album, Fearless: https://itunes.apple.com/us/album/fearless/id1077058431 Virtue is destined for greatness and they expect the impossible in the latest single “Miracle” https://www.youtube.com/watch?v=YjxXnCqnRHs

Terrance - It’s been ten years since the last full-length Virtue album. Tell us what’s been going on with you ladies since.

Karima - We decided to take a break not intentionally, but just living life and following God's lead and waiting for His green light. But our families have grown six children between the 3 of us we've lost some close loved ones a sister, granny, and our father, one of us has gone through a divorce, but God has kept us and our passion for ministry alive and well.
Terrance - The new album Fearless is out now. Give us a brief background on this project as far how the title and producers were picked.

Karima - When the 3 of us were approached to make a new record, we were filled with so many fears and questions about if we'd be successful. We live in 3 different places, all have other careers and are the women who keep our households running. How could we possibly still be able to minister and sing? With the support from our families and an unconventional, innovative, independent label, we decided to go for it! It's been quite a journey filled with ups and downs, but the lesson that God keeps teaching us is that we are His and the whole world is His! We don't have to live in fear of ANYTHING or ANYONE! We chose producers we were somewhat novices. They have a fresh take on music and it was just what we needed to be current, since we have been gone for a while. We also went back to two of our producers we used before Mark Kibble and Asaph Ward...they are familiar with our sound and we knew they'd give us that great Virtue sound...harmonies and tight vocals like we love!
Terrance - What has the response been like thus far getting the new music out there to fans?

Karima - We have been so fortunate to have been missed by our fans. The response has been phenomenal!! We've heard that this cd has no fillers...every song is worth listening to. And most of all, we've heard it's a blessing which is most important to us.
Terrance - The new single “Miracle” is a remake of The Clark Sisters song and you all performed it recently at the University Oakwood Church. What is it about that song that gravitated to you all?

Karima - First of all, we LOVE The Clark Sisters. But a friend of ours Justin Francis who is also a producer on the album asked us to participate in a tribute to Twinkie Clark that he was a part of. He sent us the songs and one was Miracle. We sang it and The Clark Sisters were there and loved our version of the song, they even stood up while we were singing. After that performance, we decided we should add it to our album...it was the last song we recorded.
Terrance - What are your personal favorites from the Fearless project?

Karima - It's hard to choose because we love them all, but the favorites change each day. Today it’s “More Than Words”, “He Gotcha”, “I Love Him”...the bonus track.

Terrance - As a group how do you all make sure each member is satisfied with the final product?

Karima - We are veeeerrry particular when it comes to the final product, sometimes over the top..(laughs). We all have that ear that tells us yea or nay, but we ALL must agree before it goes out. We asked each other what could be done better or eliminated. We really love each other's critics.
Terrance - Is there ever pressure within the group to outdo yourselves with each album?

Karima - Of course there is pressure to outdo the last album, but with each album comes growth and we want to show that on all levels vocally, musically, and most important spiritually.
Terrance - The Testimony album was nominated for a Grammy what was your initial reaction to that?

Karima - We were elated!! Just blessed that God thought so much of us and our hard work.
Terrance - What’s your response when the Christian community say Gospel artists are becoming too radical in their message, image and overall deliverance?

Karima - God is a radical God, everything He does is big and different. Ebony is a teacher and was taught that everyone learns differently, therefore one must differentiate. The world we live in is forever changing and to stay current, our delivery and image must attract those who are in the world. Our message stays the same, to tell others of God's goodness and His grace towards us and that He loves us, but we must reach people where they are. And if that means going in the streets, wearing holes in our jeans, adding a rap to a song, or dancing like David did, we'll do it with God's blessings!!

Terrance - I know awhile back you released a solo project, Just Karima. What was that transition like stepping away from the group at that point?

Karima - While we decided on a break for Virtue, I decided to try my hand at being a soloist...it was scary...I missed my sisters. It was fun recording because I totally love the studio, but when I couldn't look to the left or right and see my girls, man, I needed them. But it still was a blessing to go out and minister and it helped me with some insecurities and fears.
Terrance - If the opportunity presented itself would you all consider Reality TV or some type of show documenting your sister dynamics?

Karima - Of course, you'd be amazed at our talents LOL!! We'd love, too!
Terrance - Who were some of your greatest musical influences growing up?

Karima - Yolanda Adams, Fred Hammond, Commissioned, The Winans, Anita Baker, Michael Jackson, Vanessa Bell Armstrong, Richard Smallwood, The Clark Sisters, and the list never ends!
Terrance - Reminiscing on the self-titled debut album that spawned popular Gospel anthems like “Quiet Times”, “Greatest Part Of Me”, “Let the Redeemed” and “I Must Tell Jesus”. Can you share what you remember about the recording sessions for that album?

Karima - Mannnnn, we moved to Detroit for over a month to work with Mitchell Jones of Commissioned, COMMISSIONED!! one of all time OUR FAVORITE groups (yes we're screaming..hehehe) First there were smiles from ear to ear, then we got ourselves together and recorded (laughs). It was something new for all of us, but we knew that God had blessed us with voices to sing His word and spread to the masses. I Must Tell Jesus was written by a close from of ours from college named Wayne Bucknor, we remember being in his apartment helping with the song. When it was chosen for the album, we were thrilled. Recording those songs, well anthems like you said brings back fond memories that God is so good to His children. If we follow and believe in Him, all things are possible.
Terrance - Lastly what’s the one thing that has kept the Virtue name together all of these years?

Karima - First of all, we're blood sisters and that has helped. But we love to sing and especially as a family. Although we took a hiatus for a while, we knew we'd come back when God wanted us to. He has been the glue that has sustained us all these years along with our mama… our fans also have not let us stop the Virtue name...and we'd never let them down.
Posted by Terrance at March 12, 2016

Email ThisBlogThis!Share to TwitterShare to FacebookShare to Pinterest
Labels: Virtue