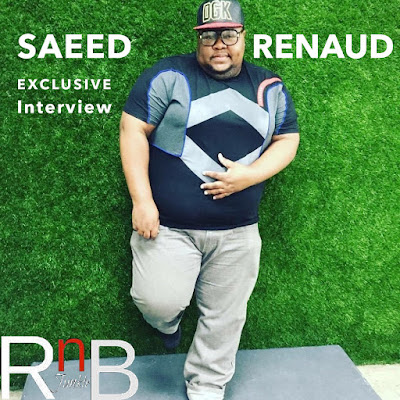 Saeed Renaud! You may be familiar with this breakout R&B sensation after being a contestant on Fox’s ‘The Four’ where Hip-Hop Moguls Sean ‘P. Diddy’ Combs and DJ Khaled were judges alongside Charlie Walk and Meghan Trainor. Saeed is no stranger to musical success with winning his first Grammy last year for Best R&B Album from the writing he contributed to Lalah Hathaway’s Lalah Hathaway Live album. RnB Junkie recently had the opportunity to interview the Grammy and BMI award-winning singer-songwriter, Saeed Renaud. We were able to discuss Saeed developing his passion for music, his writing process, the experience of being on ‘The Four,’ his latest single ‘Do It Again,' plus more! Check out our interview with Saeed Renaud below!

Colette: When did you first develop a passion for music and knew that it was something you wanted to do?

Saeed: I first developed a passion for music when I was around five years old. My mother is a singer; she used to sing back in the day. So I kind of like gravitated towards music because of her, and all of my aunts can sing. It was kind of passed down really.

Colette: You’re one half of the Grammy and BMI Award-winning songwriting group Tha Authors, can you tell us how the group formed and what’s it like working together?

Saeed: My writing partner when we first met we connected. It actually started out with three guys, but one of them just gradually left, and me and my writing partner just stuck together. Like we just have a connection, he can finish my sentences, so it’s that dope. When I am writing, and I say something and I show it to him, and then he be like, “Yo, I got something” and then we come up with something else. It’s pretty dope, so we just connect like that.

Colette: You were recently a contestant on Fox’s ‘The Four’, can you tell us what that experience was like?

Saeed: The experience was crazy! It was like ‘The Hunger Games,’ cause one moment you’re on it and the next minute you’re not. Yeah, so it was kind of like survival of the fittest, pretty much, but it was a very good experience. I wouldn’t change it for nothing.

Colette: Listening to some of your material on your SoundCloud I can tell that you're big on backgrounds. Background vocals and vocal arranging is an art. Can you talk a little about the importance of backgrounds in a song?

Saeed: I think it’s important because it gives a song that finishing touch. You know? I look at vocal producing like art. Seeing that you have to make sure that you put everything together and give people everything, so when they look, (in this case listen), they feel everything that you’re feeling. They’ll feel everything that you felt while you were doing it. For me, backgrounds are very necessary, and some songs don’t need it, and some songs do. I really love to stack my backgrounds. I think when Brandy did Full Moon, it kind of gave everybody that idea to make sure your backgrounds were clean and precise, and that everything came in at the right time. It’s all about like timing, you just got to figure it out and see what feels good.

Colette: You’re originally from Brooklyn, New York and moved to Los Angeles. What advice would you give to an artist about breaking out of their comfort zones to pursue their dreams?

Saeed: Listen! That was hard for me. I didn’t even prepare myself. I came to LA to work on a project, and I just said, “You know what I’m staying.” It was just like that. I didn’t think about it. I didn’t even bring all of my clothes. I was just coming here so much that it was like, "Yo let me just stay,” so I kind of stayed. LA is like you come out here you got a year to figure it out. Around the one year mark, you be like either you’re staying, or you’re going home, and that’s pretty much how usually it is when you go anyway. You figure it out. For me, I had to take the leap of faith. If I didn’t leave, I probably would be chilling comfortably in Brooklyn. I mean I’d be doing my Open Mics, and you know doing vocal stuff, I wouldn’t have pushed myself like I did.

Colette: You’re a singer, songwriter, vocal coach, and vocal arranger you do it all. Which one do you enjoy the most?

Saeed: That’s a hard one. I love doing them all. Singing, of course, gives me more spiritually. I just love entertaining people. I love singing to people making them feel how I feel, but at the same time I love teaching people to do the same thing, so it’s kind of hard. Writing is just pretty much the same thing, telling a story. They all feed me, but I think singing might be the one.

Colette: What is your writing process like? Do you ever go into a writing session with a specific artist in mind?

Saeed: Sometimes you get the task of saying this person is looking for a song, but sometimes you just come in a studio and just freestyle melodies. That’s what I do. Me and my writing partner start freestyling melodies then eventually words come, and then next thing you know probably thirty minutes later, or forty minutes later we have a whole song. It’s kind of weird. That’s how you know you got a good one if you come up with it quick.

Colette: How important is it for an artist to develop their own distinct sound?

Saeed: It’s very important. I think sometimes as artists we find somebody that we love to death and then we try to mimic them and never try to move on from them. It’s okay to mimic and get the feel of certain artists, but you don’t want to be a copy, you want to be an original. So you take a little bit, take from over here, take from this side, take from this artist, take from that artist, and then put it together to make your own sound. You know what I mean? It’s like a gumbo. That’s how you should do it. I don’t think anybody should go out and be like, “Okay I want to be like Brandy” because there’s a lot of artists who do that. They just want to sound like Brandy completely. I love Brandy to death, okay, but I don’t want to sound just like her because there’s already a Brandy. I want them to experience me. You know what I mean? I think it is very important that you find your individuality.

Colette: Who are some of your musical inspirations and do you have any dream collaborations?

Saeed: Man. Okay, well I just talked about Brandy, so I got to say her. Brandy definitely. Whitney definitely. Aretha, Donny Hathaway, Lalah Hathaway, Anita Baker, Fred Hammond, Marvin Winans, Marvin Gaye, and Stevie Wonder. I have a lot of people that I’ve really looked up to. Now collaborating I’d love to do a song with Brandy, of course. Jazmine Sullivan, Lalah Hathaway, and Tank. Some singing people.

Colette: If you were to go on your phone or iPod, what artists would appear in your most played playlist?

Colette: You released a song recently entitled “Do It Again,” can speak on what the lyrics behind the song mean to you?

Saeed: The song was actually something I freestyle. I was in the studio, and I just started freestyling the verses. I was like okay, “am I going through something?” [Laughs] It was really like what I was feeling. I’m singing, “I’m looking in the mirror tears falling down my face. I question if you love me, but I’m back in the same place isolated all alone…” It just flew, it came out, and I was like “Oh, okay.” It’s a song about yeah, you breaking up, but every time you see this person you’re back in the same habit of getting back together. You know it’s not gonna work, but you love them so much that you’ll do it all over again. That’s basically what the song is about.

Colette: What’s next for Saeed Renaud (Ranod)?
Saeed: Next for Saeed…I’m definitely finishing my album. There’s a video coming out today for one of the songs I put out called ‘I Love You I Love You.’ Everybody needs to go on YouTube look for SRSoul ‘I Love You, I Love You’ and it will pop up somewhere, or go to my Instagram and it should lead you there. I’m working on that. There’s a couple of shows coming, so look out for those. I believe the next show might be in Houston, I think? I have to find out for sure, but I will keep y’all posted it. There’s a lot of stuff going on. People are coming out of the woodwork. Cousins that I’ve never met before, but I’m not mad it.

Colette: Before you go can you tell everyone how they can reach you on Social Media?

Colette: We really appreciate the time that you allowed us to have for this interview and we’ll be on the lookout for your new material.

Thank you so much for having me. I know I sound like I’m crazy; my voice is all crazy because I was in the studio all night. Thank you for having me.

Posted by Idealistic Ambition's at February 19, 2018

Email ThisBlogThis!Share to TwitterShare to FacebookShare to Pinterest
Labels: Diddy, Do It Again, FOX, I Love You I Love You, Lalah Hathaway, R&B, Saeed, Saeed Renaud, The Four