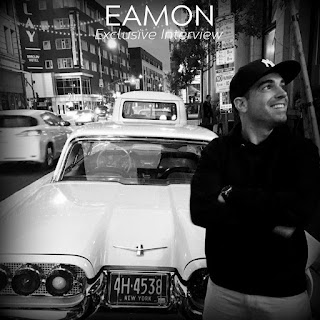 Singer, songwriter and producer Eamon who first burst on the music scene over a decade ago with his worldwide #1 hit “F**k It (I Don’t Want You Back)” has returned with a fiery new album soaked in soul that plays like a modern soundtrack to a bygone era of music making. ‘Golden Rail Motel’ is available everywhere music is purchased online.

Terrance: Talk about your earliest musical beginning and influencers.

Eamon: I started singing professionally as a kid around 9 years old with my father’s doo wop group. What really blew me away is that there were kids who were making incredible records back in the 50's at a really young age. Guys like Frankie Lymon, Lewis Lymon, Little Anthony, The Students. All guys who weren't successful because of an age gimmick, but truly because they had amazing voices. That inspired me a ton at such a young age. Other inspirations were Sam Cooke, Jackie Wilson, Stevie Wonder, Ray Charles. I can go on and on. But the younger guys were the main ones in the beginning.

Terrance: How did you get your first deal that led to your debut album I Don’t Want You Back?

Eamon: Lots of labels turned me away because the music was too vulgar. No one was doing that style of music with that kind of language. Most every label loved it but no one had the guts to pull the trigger. So like most situations, you have to show them for yourself that it'll work. My manager at the time had a relationship with Star from the Star & BucWild show on hot 97, Star had a morning show. My manager played him the record and he loved it. The next morning he played it live on Hot 97 and the phone lines lit up. People went bonkers and wanted to hear it over and over. It was a breath of fresh air that was never heard before, especially on mainstream radio. He winded up playing it 8 times in a 4 hour show. The next day I had every single label that turned us away, begging us to come back to their offices to sign a deal. We winded up going with Jive who we saw fit as the best home for the situation.

Terrance: Were you surprised “F**k It (I Don’t Want You Back)” took off the way it did?

Eamon: It was mind blowing of the success I saw off of it. I never thought it would get off the ground in New York, forget about the whole world. Especially because of the vulgar language. Never in history did a pop/r&b song have that kind of language with any kind of success. It's still blows my mind of the impact it has to this day.

Terrance: Can you explain why your sophomore album Love & Pain went unnoticed in America?

Eamon: Definitely a lot of tension between the label and the team I had at the time. Some things that were out of my hands that I'd rather not speak on.

Terrance: Talk about the obstacles you were faced with and how you managed to overcome after Jive.

Eamon: People weren't created to be worshipped. I've never met a famous person who liked being famous. During my time with Jive and after my time with Jive I struggled with addiction, depression and isolation. I didn't wanna be bothered with anyone, I just wanted to be left alone. I medicated myself with different things until I felt nothing. That led to near death experiences. But only through the grace and mercy of Jesus Christ I am here today. My legs had to be broken to realize who was the gift giver behind anything good in my life. That was 7 years ago and I've never been the same.

Terrance: Getting into your latest project Golden Rail Motel, talk about the inspiration behind the title.

Eamon: Golden Rail Motel is by far my best work and in my opinion shows a lot of growth as a singer, writer, producer and artist. I went back to my roots of soul music mixed with doo wop vocals and of course hip hop influence. It brings you through the insanity, joy, death and salvation of a kid from New York who sings every song like it's the last time anyone is gonna hear from him. My whole life changed from a lot of time I spent in a hotel years ago. I went back there in my head to create this album.

Terrance: “Before I Die” stands out to me for it’s profound lyrical content and with that being said, are your songs based off personal experiences or friends or both?

Eamon: Getting angry or frustrated about something always gets me more inspired than being sad about something. “Before I Die” is based on me being completely disgusted with life and self-centered people. And as for personal experiences this album is the first time where I've gotten super personal on some songs. But yeah, sometimes I write about friends experiences, people I don't know and sometimes I just write a story.

Terrance: Any final words you would like to leave for the readers?

Eamon: I put everything into everything I do, even this interview. If you made it to this last question, thanks for checking me out. Go get the album Golden Rail Motel, put on a nice pair of headphones and listen front to back. Only 10 songs and I'm confident you'll enjoy it. Also hit me up on all social media @EamonOfficial and we'll stay connected. Thank you.
Posted by Terrance at April 02, 2018