An Interview with Trina Broussard 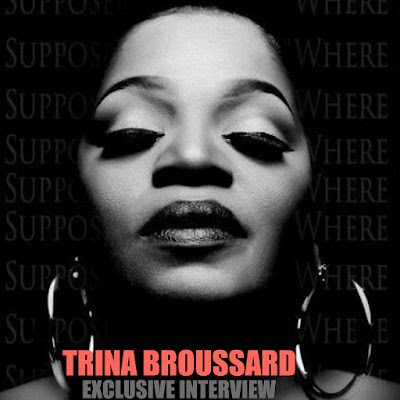 R&B songstress Trina Broussard first burst onto the music scene with her critically-acclaimed cover of Minnie Riperton’s classic “Inside My Love” in 1997 for the Love Jones: The Music Soundtrack. Since then she has released two full-length studio albums Inside My Love & Same Girl, followed by several singles including her latest “Where I’m Supposed to Be” which has been holding the #1 spot on the Official Indie Soul Charts for two consecutive weeks. I caught up with Broussard to discuss the courageous song, musical beginning, being an independent artist, forthcoming album and much more...

Terrance: First off, congratulations on your single “Where I’m Supposed to Be” second week run at #1 on the Official Indie Soul Charts.

Trina Broussard: What a blessing. Thank God for Chris Clay and many other DJ’s that came through and had a personal conversation with me and told me they loved it and definitely were going to push it. Rnbmoguls which consist of Corey Miller and Anthony Richards for finding that particular song for me. The song is honest, it’s truthful and I’m proud of it and I’m grateful.

Terrance: Talk about how it all came together.

Trina Broussard: Anthony had sent a couple of tracks to me and out of the six tracks, that was the one I picked and they were kind of shocked I would pick that one because they say I’m more of a jazz or mid-tempo or slow ballad person, but I really liked it and liked what I heard. I was in Houston at the time visiting my family and I had just recorded another song for them called “Forever” and the process in our working relationship went so well they ended up sending me another track which was “Adieu” and they ended up sending this one last.

Terrance: Were you surprised at how well it took off and was received?

Trina Broussard: I was really surprised because I have to be honest with you, I was a little nervous. I kind of went back to the guys at rnbmoguls and kind of stalled them a little bit. They were a little upset with me because I was like I didn’t want to make it seem like I was trying too hard or trying to do a trap song and they were like, listen at the end of the day you claim a song, it’s an honest song and it’s a honest story and people can relate to the lyrics. I’m just really surprised and grateful at the same given time.

Terrance: Take us back a little to your debut song to the world, “Inside My Love” from the now iconic Love Jones Soundtrack.

Trina Broussard: That credit goes to Jermaine Dupri. At the time I had signed to So So Def. Trey Lorenz and I were roommates at the time and he helped me with a demo and gave the demo to Jermaine. I got a call from Jermaine around two o’clock in the morning and Jermaine said, don’t give this demo to anybody else I want you to come to my office for us to sit down and talk about doing a deal and we did the deal probably a month or two later. I got a call from Jermaine one night maybe twelve or one midnight and he said, hey I want to talk to you about doing a song for this soundtrack and it’s a Minnie Riperton song and I said which song is it? He said it’s “Inside My Love” and I was really nervous and I told him I would call him back. So I go across the hall knocking on Trey’s door and told him that Jermaine wants me to do Minnie Riperton’s “Inside My Love” for a soundtrack and I told him I don’t know if I could really hit those notes and Trey said, you need to get back in there right now and call him and tell him you’re going to do it. At the time I was a little green, just stepping into the industry as a recording artist. I had been doing gigs and background work but I’ve never done solo one’s for myself. This was my first chance to be featured on anything, so Trey said, you need to call him back and let him know you’re going to do it. At the time soundtracks were really big and so as I mentioned I was a little green when it came to certain things and so I called Jermaine back and he said, okay cool but there’s one catch to this, this is the last song for the soundtrack and we have to have this song in by midnight and I said, Wow. So I have to thank Jermaine for extending that offer to me to do the song. I have to thank Trey, he was the one who called up the musicians that night and put the whole session together. That’s pretty much history, it was Jermaine Dupri and Trey Lorenz, I have to give them credit for it and of course the young guys who came in and played on the record by the names of Trey Gilbert who played bass and Kelvin Broughton who helped with a lot things, Lil’ John Roberts who is an excellent drummer and is one of my favorite drummers in the industry. It was a wonderful thing.

Terrance: Can you share a little about your earliest musical beginning. When you realized singing was your calling.

Trina Broussard: Well, I come from a musically-inclined family. My mother is a singer, my father plays guitar, my mother’s mother was a minister of music at a Church for many, many years. My mother’s father was a blues singer, my father’s father played guitar as well and my mother’s sisters grew up singing in a group together. My brother is a musician and producer as well as my younger brother. I pretty much been around it all my life. It was inevitable watching my parents rehearse in our garage with a ten plus piece band. There were congas and bongos and horns and B3 Hammonds and pianos and just a whole plateau of people coming together making a joyful noise.

Terrance: What artists have continued to inspire you through the years?

Trina Broussard: I’m an old school head, I absolutely love Aretha Franklin and Ashford & Simpson, Oleta Adams, Stevie Wonder, Lionel Richie, Jennifer Holliday and anybody who knows me and knows me well knows that my childhood favorites are The Emotions. The Emotions absolutely kind of get in my ear for listening to different textures and tones when it comes to background vocals and blending, they are my absolute favorites. I love the new school, I love Fantasia, I think Jazmine Sullivan is excellent. Mica Paris is probably one of my favorite singers. Of course my brother Rahsaan Patterson who is a great singer-songwriter and family to me. There’s a lot of untapped indie artists I appreciate as well. There’s Russell Taylor, Sy Smith, Avery Sunshine. I think Jill Scott is brilliant. I grew up listening to Earth, Wind & Fire. On the gospel side, as I mentioned my mother’s mother was a minister of music in Church for many years so I grew up listening to The Hawkins Family, The Clark Sisters and Yolanda Adams, who used to go to a Church down the street from my house at the time when she was part of The Southeast Inspirational Choir, so I mean there’s a host of people and I might be leaving some people out. I’m pretty much inspired by everybody. If it’s good then I’m in.

Terrance: You spoke of appreciating indie artists, so tell me what do you love most about being an independent artist yourself?

Trina Broussard: For me, and this is what I’ve been telling a lot of my indie artist colleagues, with this there are no boundaries and that’s not to say major artists don’t have boundaries either, but there are no boundaries. I just tell them to take it and throw it up against the wall and see if it’s going to stick or slide, that’s all you can do. It’s a great thing without the restrictions or someone over your head saying we don’t like that and not to say indie artists aren’t opened to constructive criticism and listening to someone who can bring some things in and enhance whatever you’re trying to do, I’m always opened to that, but I’m able to be comfortable in what Trina is doing. I have to be honest a lot of the stuff I did outside of “Inside My Love”, I was just doing it to be doing it on the Inside My Love and Same Girl albums and I just didn’t feel I was singing and convincing people, but this time around I was able to really sing it and mean it if that makes sense to you.

Terrance: Can we expect a follow-up third album to 2004’s Same Girl in the near future?

Trina Broussard: Absolutely. We are pushing to have an album to you all by early or late fall of 2018. I’m finishing up songs now, so yes.

Terrance: What makes Trina Broussard, the person the happiest?

Trina Broussard: Just seeing other people happy. I love to see the underdogs become victorious. I love redemption. I love seeing my family and friends happy and I love laughter. Most of my friends are really weird and crazy and I always say if you don’t have a touch of crazy with you then we can’t be friends. I believe in self-forgiveness, a lot of people beat themselves up, but I like to see people come through the fire with victory all over them. I just like to see people win, period.

Terrance: Outside of music what are your hidden talents?

Trina Broussard: What people don’t know is I was my high school’s best actress. I really went to school for acting. I went to State every year and won competitions, so I really want to get back into acting very soon and I have a few scripts I’m working on, so that’s a hidden gem that I’m ready to share with the world.

Trina Broussard: What I’ve been getting into lately as of February 21st is setting my alarm clock for 3:45 every morning from Monday through Friday for an early morning boot camp class. I’m not ashamed of my age I’m 48 and will be 49 in October. I’m really becoming settled into the woman that I am and I’m loving that, the flaws and everything. There was a time when everything had to be picture perfect, but I’m like, you know what? There’s something about when you get grown, you let things just roll off your back like water. The things that matter are the people in your life that you care about and when you want to see them happy and making sure you’re encouraging them and making people in your life accountable and I want people to make me accountable for things. I’m just in a new place now where the song “Where I’m Supposed to Be” talks about having a peace of mind and I truly have that and it’s priceless.
Follow Trina Broussard:
Instagram & Twitter @trinabroussard
Facebook @therealtrinabroussard