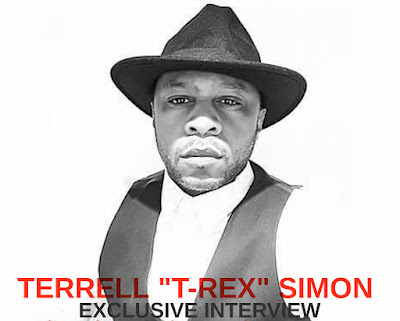 The 2017 Steeple Award Winner for Best New Artist and Troy, NY native Terrell 'T-REX' Simon started delivering soul-stirring music at the age of six, when he discovered his gift singing in the church. He got his professional start in New York City while performing with a traveling choir throughout the region. In 2003, his connections led him to platinum-selling singer-songwriter/producer Lyfe Jennings who took him on the road with his act. T-Rex began touring with such major artists as John Legend, Beyonce, Anthony Hamilton, and Musiq SoulChild. As a huge fan of Dave Hollister, coming up he adopted a similar sound, patterning his voice after the vocal sensation, and later touring with him as a backup singer. His TV appearances include Jimmy Kimmel, Good Morning America, David Letterman, Jay Leno, 106 & Park, and The Monique show, among others. The pivotal moment in his career came when he appeared on MTV Unplugged with Neyo, which gained mass exposure for him.
After sharing stages with everyone including Wyclef Jean and Mario, T-Rex started managing artists like Lyfe Jennings, and road-managing vocalist Shaliek while mentoring and developing him and other talents such as Day 26. In 2015, he teamed with artist, producer, and singer Lamar Casey who helped executive produce and co-wrote his debut album. T-Rex also teamed with Bernie Stevenson (Isyss, Kelly Rowland), who took his riveting raw vocals and created the soul-stirring track, "In His Image".
He brings to the industry his own musical genre, 'R&G' for rhythm and gospel, which beautifully infuses his natural church boy upbringing with his love of Hip Hop. "In His Image" is in rotation at Music Choice and gaining more radio play daily. The song's immediate appeal points to a fast growing musical phenomenon (exampled by over 100,000 Instagram followers to date). He has recently performed for BET matters showcase in NY, opened up for Avant,Lyfe Jennings, Bobby V, and KeKe Wyatt. The first single "Mistakes" released May 1st 2018 off his upcoming debut Album "Shadez". He has already began his promo tour across the US promoting his new music which is available on every digital platform including Spotify, Pandora, iTunes, iHeart Radio, XM Satellite, and SoundCloud, with hard copy CDs available on Amazon.com.

Terrance: Where were you born and raised? Do you come from a musical family?

Terrell T-Rex Simon: I was born and raised in Troy, New York. Upstate New York. I don’t come from a musical family, but my grandfather on my father’s side was a quartet singer at Church and my father on my grandmother’s side played the drums for B.B. King actually. Other than that, not too much just me (laughs).

Terrance: Who were your earliest musical influences growing up?

Terrell T-Rex Simon: Bobby Brown, New Edition, Michael Jackson. I pretty much liked everything, but definitely Michael Jackson and Bobby Brown. I used to try to be Bobby Brown with the baggy pants and shoes and the dances. As I got older it started changing. Karyn White was like one of my favorite artists and then Mary J. Blige came out. After Mary Jane it was a wrap. The Queen of Hip Hop and R&B. Even my music style is kinda like hers.

Terrance: For first time listeners, how would you best describe your sound?

Terrell T-Rex Simon: Well, my favorite singer is Dave Hollister, so I’ve always try to like pattern myself after him from a kid. I don’t know what it is about Dave, but I just fell in love with his voice and was like I want to sound like that. But I call myself R&G which is Rhythm and Gospel, because I love Hip Hop and R&B so much, but the Gospel side is the conscious lyrics. Just music with a message. The G means good news. So it’s R&B, Hip Hop and inspirational Gospel mixed together.

Terrance: You just recently performed at the sold-out Jazz Festival in Vegas with Lyfe Jennings. What was that experience like?

Terrell T-Rex Simon: Man that was amazing. First of all I’ve been performing with Lyfe since he started in 2003. I started out as a background singer and ended up being his assistant and other different things, so we’ve been doing this for a while. But I haven’t seen him in the past two years. I started doing my own music and just went all in with what I’m doing. It was special because I hadn’t did it in a while, so it was nice to go back with the band and sing “Must Be Nice”, “Never Never Land” and all of those records. It was awesome and he’s an awesome guy. I’ve done so much for him and he’s always right there making sure I’m good.

Terrance: Talk about the inspiration and meaning behind your new single “Mistakes”.

Terrell T-Rex Simon: Well, you know I’m a big fan of Mary J. Blige. I think when I connect with the audience through my life I always sing about what I’m going through at that present time. I’m a little older now and kind of learned a lot from my past of making mistakes, being young, being dumb and people can hold things against you and that’s kind of something I was going through and I’m like I’m not even on that anymore and I’m not that person anymore. So it’s a little vent song, but at the same time encouraging everybody like, we’re going to make mistakes. Everybody in the world can say they made mistakes and not one person in the world can say, oh no I’ve never made a mistake. So I wanted it to be universal and I wanted the message of the song to affect everybody. When the song first come on I’m admitting I was wrong first, but we can’t let our past and mistakes hold us down. We got to learn from our mistakes and keep it moving. That’s what the song is about and the whole album is about my life. Just little situations I was personally going through.

Terrance: You mentioned your album. What can you tell us as far as the producers and collaborators?

Terrell T-Rex Simon: The guy who I worked with as a producer his name is Burnie Stevenson. He’s produced “In His Image”, he’s produced my last record “Let It Rain” and he also produced this record. I’m writing with two rappers. Alexander Noir who is from the Bronx and another my friend Akeem from Harlem. Sometimes we get older and kind of know what’s going on but you don’t know what’s going on. Time change, music change, things change and I wanted to make sure that I had that swag (laughs). So I brought in some young rappers. They’re fresh and new and I’m a singer and I gave them my ideas and we sat and talked about my life and what I’m going through. I’m working with a guy named J.J. from Jersey, he’s a vocal coach, arranger, Grammy and Oscar nominated. I go in the studio with him and he just knows how to tell me what to do and how to do it. Backgrounds, he’s a master at that. So between those guys we came up with the album it’s called Shadez and it will be out later this year.

Terrance: What’s the importance of performing live for your brand of artistry?

Terrell T-Rex Simon: I think live is where you connect with people. I’m also a musical director, so I put together live shows for different artists. I did Day26. But to hear the record is one thing, to actually see and feel it live is another thing. People might hear the record and not so like it and then they come and hear it live and they’re like, Wow! Maybe I do like this record. I think it’s important because we don’t make a lot of money off record sales, and if you can have great live shows like Frankie Beverly & Maze and all of those guys still selling out stadiums who haven’t had a single out in 50 years (laughs), when people go see them they’re gonna get a great show. Growing up in the Church I have all of that training from a kid, so I’ve always been big on sounding great live. So it’s important because it sell our music and puts money in my pocket.

Terrance: You’ve performed at the B.B. King Blues Club several times and with that being said what are your thoughts to it closing down after two decades?

Terrell T-Rex Simon: Wow. I’ve been performing at B.B. King’s for the past 15 to 20 years. To know that it’s not going to be sitting right there is crazy and thank God for the past two years I had a residency where I was performing every two months. They featured me as an in-house performer and it was great man that they gave me a high platform. That’s not something easy to get and so I’m grateful to have been part of that and be part of history. They have a new place now called Sony Hall and things change, vibes change and we just have to keep going with it. But it’s sad.

Terrance: Everyone have their perception on what success is. How would you define it?

Terrell T-Rex Simon: I guess I would define it as being happy. That’s a hard thing to be sometimes (laughs). If you’re living your life and you’re happy you’re at a success point.