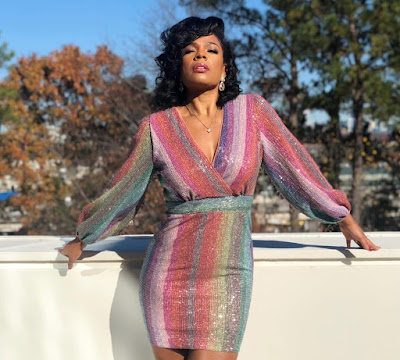 Grammy nominated R&B Singer-songwriter, author, advocate and TV personality SYLEENA JOHNSON recently released the new empowering female anthem “Woman” which serves as the lead single and title track from her upcoming 9th studio LP on January 31st. I caught up with Syleena where she updates us on her self-help book, The Weight Is Over, new music, Upcoming events and much more...

TERRANCE: Since our last interview, you’ve published a self-help book titled, The Weight Is Over: My Journey to Loving My Body From the Outside In. Update us on that and why it was important for you to share your message with the world.


SYLEENA JOHNSON: Well, I’ve been thinking about this book since 2013. I had a dream about this book actually and started writing it then. I went to a couple of ghostwriters and I stayed with Amera McCoy and sat with her and she was pretty good. She’s the only one that kinda got my vision but I still had to take over and write my own story. She showed me how to structure it though, but I had to take over because I knew that if I had written a book and my fans read it and they did not hear my voice when they were reading it, then it wouldn’t be right. I finished writing the book last year at the end of September and it came out on October 15th. I just felt like as an entertainer, you know, we sing about our life stories all the time, but I thought it would be a more intimate look into the things that I deal with as a woman and to be able to connect with other women especially since I’m a Health Awareness advocate. I advocate for black women and their health. I’m big on it and I want us to change our diets and I want us to eat better, but it’s really not so much about weight loss, it’s moreso; about depression, so The Weight Is Over is anonymously the ideology of the pressure of being a woman, you know what I’m saying? So The Weight Is Over is about changing your perspective so that the stress that’s in your life isn’t so heavy on you all the time. You change your perspective about each one.

TERRANCE: Getting into the lead single “Woman”. Talk about the events that led up to recording that particular song.

SYLEENA JOHNSON: Oh my Goodness. Well, you know what? Let me tell you something. God must’ve knew something about that song. Based on what we are going through right now as women in America and this attack with this abortion bill, it is just outrageous with the attack on women. The way that police officers are shooting us down dead and we’re being thrown to the ground. We’re being disrespected to such a high level right now and it’s outrageous and outlandish. It’s interesting because this song could not have come at a better time. It’s almost like, if you listen to the lyrics, it speaks to every problem that’s going on right now. I was pushed to write this record simply because it’s interesting, I’m on the other side of the couch now. If you think about it, Sister Circle is a press forum, you know what I’m saying? People come to us on their press runs, so at the end of the day I’ve been privy to information that as an artist I wasn’t and it changed my viewpoint on America as a woman and our role as a woman in America. When you’re an artist and I don’t mean to say this in a bad way but you’re kinda in lalaland and oh everything’s cute, great and Earthly Joys because it’s about creativity, but no that’s not what’s poppin’ in them streets. They’re out here shooting us down. Another thing too, is the internet has become a press outlet, low key, because now everyone have access to everything that’s going on in our nation. Their amplified and the fact there’s footage floating around of that woman that was shot down by that police officer. That’s not something we would have seen maybe ten years ago, we probably wouldn’t have had that type of access and so I think because I’m a little more aware, I think that record comes from a place of anger and not anger as in angry black woman but frustration, you know what I’m saying? What are we doing with our women? Why aren’t we upholding our women? What is going on in the world? When men aren’t protecting us anymore as if it’s out of style or did it get played out? What happened to where women are getting disrespected and we have to have a whole movement called #MeToo and #TimesUp with women marching and all kinds of foolishness. What’s happening to where we have to redo this? It’s like the feminist movement all over again, so the song is appropriate for the time.

TERRANCE: What can you tell us about your upcoming album Woman as far as collaborators and content?

SYLEENA JOHNSON: I’m working with a producer out in Chicago. “Toxic” is my producer and Audio One which is his production team and I’ve worked with them before on Chapter 4: Labor Pains and Chapter 5: Underrated. “Toxic” is my music husband. The chemistry between the two of us as far as music is concerned is undeniable. He gets me and he might be one of the very few people in the world that understands me musically and what I’m trying to say lyrically as well and so for me it’s not about, oh I need to go and get this producer and that producer. For me, it’s about working with talent and working with genius minds that understands the Syleena Johnson voice and vocal, that’s all I want to do. I just want creative people and people who want me to be creative and want me to be myself down to these records. I don’t think any of my music has not been me. I think that every album that I’ve ever put out has really been me at that time in my life, so I’m proud of everything I’ve put out and I can honestly say I don’t think I’ve put out any trash or anything I can look back on and be like, I don’t know who I was trying to impress that day. I don’t have any music like that. So that’s very good to be able to live with that, however; on this next project there is something that you might not have heard and it’s a piece of me that I couldn’t give before because I felt in the past that it may not have been received properly, but because we’re in such a time where you can be who you are, I just feel now is the time. One of the things I’ve always felt was like, I want to do songs that when I’m on stage, I’m in love with them just as much as the audience and so that’s been like my focal point coming from that context. I want to make records that when I sing them, I’m just as overwhelmed or getting just as much satisfaction as the people in the audience. That’s my ultimate goal.

TERRANCE: That’s the way it’s supposed to be.

SYLEENA JOHNSON: Yeah, but it’s not. You know, a lot of times we get caught up in what’s going to sell and we lose ourselves in that.

TERRANCE: I noticed you dropped Chapter off of this album title.

SYLEENA JOHNSON: I did. I let go of the Chapters because that book is done. That part of my life is done and everything that I’ve ever done has made me a better woman and it has accumulated to what you see in me as a woman.

TERRANCE: What do you hope fans and listeners take away from the Woman experience?

SYLEENA JOHNSON: Like with all my other albums, I want it to be timeless. I want them to be able to listen from beginning to end. My focus is for it to be all of the different elements and emotions of a woman’s heart and mind and so it’s going to be great. It’s crazy because I didn’t even know we were going to be having such a bad time in America right now, so it’s like right on time, you know what I’m saying? So I can really just go in and turn up on the lyrics because they’re out here trippin’ when it comes to women. I want it to be something that can be played through all ages and stages of life.

TERRANCE: Besides the album, can we expect any shows or special events anywhere anytime soon?

SYLEENA JOHNSON: I’m getting ready to possibly bring out a skincare line with Kimo Bentley, so I’m just movin’ and groovin’ and when I tell you movin’ and groovin’, God is extra good right now. I’m just excited about my new album and everything that I’m doing to prepare for it, so it’s going to be a really, really great big Summer. I have some other things coming but I can’t speak on them at this time, but they are coming.

TERRANCE: I would assume one is the Clothing Partnership with NYC?

SYLEENA JOHNSON: Exactly. Oh my God. Okay, so I’m a brand ambassador with the Clothing Partnership with NYC, but we are in talks about increasing and expanding our partnership as well. Everyday women can really relate to those type of clothing because they are affordable, their beautiful, sturdy and not chimsey, slimsey and cheap and they are great quality clothes you can get at a decent price, so it’s clothing for the everyday woman and the working woman. They have joggers and a swimsuit line and I’m very, very proud of the company and the way that they have evolved with their clothes and the people that they have in their ads. You have the Kate Hudson line, Gabrielle Union line, and so I think it’s an excellent brand and I’m honored to have a partnership with them.