An Interview with NAJEE 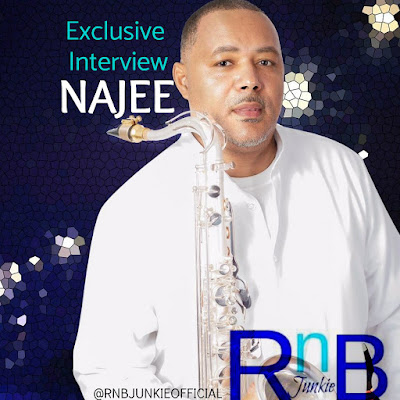 Grammy nominated and Award-winning Jazz saxophonist and flautist NAJEE returns with his 18th overall album Center of the Heart in his illustrious musical career which peaked at No. 1 on Billboard's Jazz Album chart. I caught up with the renowned musician himself to discuss the project, his earliest musical influences, dream collaboration and much more...

TERRANCE: Can you first share with us a little about your earliest musical influences coming along and those who continue to inspire you?

NAJEE: I grew up in New York City, so during the time I came up, Jazz and music in general was promoted as part of our education in the public school system. So, I'm always proud to say I'm truly a product of New York City's public education during that time. That expanded for me to be able to study at Jazzmobile where I had the experience of studying with Jimmy Heath and Frank Foster. I came up during that time when I was just exposed to a lot and that ultimately extended to me becoming a professional musician at 16 and at 18 I did my first world tour for the USO. Playing with my band touring all over Europe, Central America, Greenland and Iceland on behalf of the military. My influences were probably my teachers, my mother was a great influence because she loved the sound of the saxophone. Starting with Miles Davis on trumpet to listening to George Coleman on tenor saxophone and Joe Henderson. In the contemporary world, it was Grover Washington and others.

TERRANCE: You recently released your #1 Billboard Jazz album, Center of the Heart. What inspired that title?

NAJEE: Oh, yes. Thank you. I really didn't have a working title for the record. There's a young bass player that's been on the road with me this past year, named Blair Bryant, who wrote the title song and I ended up giving it the title Center of the Heart and that's pretty much how it came about.

TERRANCE: Talk about the process you took when you went into recording this album.

NAJEE: You know, I'm at a stage in my career where I enjoy working with other people who are writing because for me the sense of sitting in the studio and writing, I really don't enjoy that much anymore by myself, but I enjoy it more when I'm working with other people who are great writers and producers and on this album I had the chance to work with Demonte Posey who produces for Eric Benet, Toni Braxton and a lot of other people. He produced the orchestral version of "Alfie" for me as well as the song "Better" which features Kenny Lattimore.

TERRANCE: How did "Better" with Kenny Lattimore come to be?

NAJEE: Well, Kenny and I have known each other for many, many years. We've toured together. Our first meeting was in 1998 in South Africa with Nelson Mandela. We went as a guest along with Stevie Wonder and Chaka Khan and that was our first association and until this time, we've always made a commitment that one day we would love to work together and the opportunity didn't come until now, you know?

TERRANCE: There's a re-imagined take on Maxwell's "Sumthin' Sumthin'" on the album.

NAJEE: I first met Maxwell when I was touring with Prince. I've always liked that song. That's just some old R&B redone. (Laughs).

TERRANCE: One of the interesting tracks is, "Face to Face". What inspired that song?

NAJEE: That's a song that was co-written by Darren Rahn, whose a saxophonist. I went to record that song on saxophone and for whatever reason, none of my reads would work on my mouthpiece (Laughs). So, I ended up playing flute and using him to play saxophone and we made it a collaboration between the two of us and that's how "Face to Face" came about.


TERRANCE: Is there a personal favorite on the album?

NAJEE: I have a love for the song "Alfie", because my mother really enjoyed that song when I was growing up. So every time I hear it, I think of her.

TERRANCE: You've collaborated with many artists over the course of your career, but is there still a dream collaboration on your wish list?

NAJEE: I toured with Chaka Khan in '83 on the Ain't Nobody Tour. She was really the one who brought me to the forefront in terms of what I consider to be like a real gig on a major level.(Laughs). But we've never done any recordings together. I would love to be able to do at least one recording with her.


TERRANCE: We should shout her out and get her on board.

NAJEE: Yeah, but you know I might get my friend 'Bluey' from Incognito to do it.

TERRANCE: Have you ever looked back on your discography and thought, what was I thinking when I recorded certain tracks?

NAJEE: Oh yeah, all the time. (Laughs). Sometimes when you were signed to big labels back in the day, you would try to meet a deadline and that was not always a good thing, because you find yourself recording songs you wish you didn't want to record.

TERRANCE: If there's one track in your catalog that defines Najee, what would it be and why?


NAJEE: I think that's really hard to lay down to one track, because I suffer from multiple personalities because of the different instruments. (Laughs). I play flute. I play saxophone. So, I couldn't really, honestly name one song.

TERRANCE: Are there any hidden talents outside of music, people might not be aware of?


NAJEE: I wish I could claim some, but honestly man, this is where I've devoted my life and my time. (Laughs). Fortunately, I'm one of the musicians that have been able to benefit and monetize it.

TERRANCE: What do you hope listeners take away from the Center of the Heart experience?

NAJEE: Just another Najee experience. I try not to record the same album twice. That's really important to me that every album is different from the last one.

NAJEE: Yes, we did a song together and I actually would like to do something more with her. Do more recordings with her, because she really is an underutilized talent.

TERRANCE: And to wrap it up, what can you tell us what we can expect next from Najee?

NAJEE: I am touring in the beginning of 2020. Starting in January. I believe Cincinnati, OH is our first, then the Capital Jazz Cruise and we have a few international dates.

Email ThisBlogThis!Share to TwitterShare to FacebookShare to Pinterest
Labels: #najee, Center of the Heart