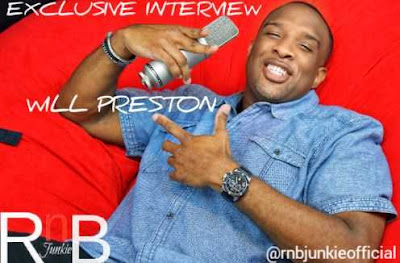 In 2005, Virginia-born and multi-talented Singer-songwriter Will Preston released his critically-acclaimed debut album It's My Will via the West King Entertainment imprint. This project was followed-up by the intimate live CD/DVD release Caught In the Act...The LIVE Experience and the 2013 release #reacquainted. Preston returns with his catchy new guitar-driven mid-tempo single "Never Knew Love" available on all digital music streaming platforms which serves as the lead single from his upcoming album due in October.


TERRANCE: First, congratulations on the release of your new single "Never Knew Love". How does it feel to get new music out there?

WILL PRESTON: Thanks man.  And congrats to you too.  I’ve loved watching your brand really grow over the years.  I’m a fan.  I remember when you were first starting out.  I would go and read your interviews and always found them to be insightful.  Very entertaining and informative.

To answer your question, it feels great.  I released my last project #reacquainted seven years ago, so this upcoming project is long overdue.  It’s amazing that once I started putting the buzz out earlier this year that I was working on new material, it’s like everyday or every other day someone is asking me about the project.  I guess people have been waiting.  It was kind of like “Finally. Where have you been?”

TERRANCE: Walk us through the creative process and how it came to be.

WILL PRESTON: It’s a feeling.  I got that itch.  I just felt like recording a project.  I wanted some new Will Preston material in the mix.  I’ve recorded things over the past several years, but I wasn’t focused on a full project.  I have my own recording studio, so whenever I felt like doing a little something here and there I would, but I wasn’t in the right zone to commit to recording for a full project.  It takes focus and a commitment to timelines.  Earlier this year, I was ready for it and said let’s do this.

And then the pandemic hit, so my plans changed a little.  I had planned to work with a couple of producers and writers during that time and of course that came to a halt.  But I wanted to keep pushing.  I typically write about 70% of my project I guess, and the remaining songs I choose from other writers.  On this project, I wrote everything.  I was in such a good zone creatively.  Still am.

TERRANCE: Many of your songs speak on love and with that being said, what does Love mean to you?

WILL PRESTON: Yea.  Good question.  Love is multifaceted.  I’ve sung about love from many angles, and I’m sure I’ve missed a few.  Love doesn’t look the same for everybody.  Love is complicated.  It’s the best of everything and also the worst pain you could ever experience when things are not in harmony.  Anyone who has ever truly been in love can tell you that it’s more than sharing good times.  True love endures.  As the lyrics go in Never Knew Love, “I never knew love could make you act like this. It twists and it turns and it’s not all bliss.  I never knew love could make you feel this way.  There’s something about love that makes you go insane.”  I view love as the foundation.  If the foundation is solid, the twists and turns will ultimately lead back to the straight road.  Those bumps and bends also help define love and can at times add to the intensity.  Just find that special one and hold on for the ride.  That’s what it’s all about.

TERRANCE: This year marks the 15th anniversary of your debut album It's My Will. What is your most memorable moment about making that album?

WILL PRESTON: Can you believe it’s been 15 years?  We probably first met around that time.  That’s crazy.  That was the beginning of it all for me commercially.  I remember how excited I was to work with Funkeeboy.  I recorded most of that project in Connecticut with him.  I would fly up from DC.  Sometimes I would drive.  It was cold.  I remember one session, I was very sick.  I was so congested and didn’t think I’d be able to really accomplish anything in the studio.  I was drinking, not sipping, but drinking hot tea every second it seems.  We just kept working at it.  I recorded two songs that weekend.  One was "It’s My Will", which is a favorite by many, so it all worked out.  I have so many great memories of recording that project, but that one always stands out.

TERRANCE: Talk about your growth as an artist through the years.

WILL PRESTON: I’ve definitely grown.  My writing, my vocals, my artistry in general has evolved.  The goal is to always become better, to focus on perfecting your craft.  I’m extremely proud of all of my past releases, but I listen to some of the songs today and think of things I would have done a little differently.  I think all artists probably do that.  We’re always self-critiquing. Vocally, I think I was very safe in the earlier days.  I didn’t want to be too soulful, yet I needed to capture a certain sound.  I didn’t want to be boxed into a specific category.  Now I don’t care about that.  (laughs)  I sing what I feel.  In the end, you’re going to fall wherever people want to place you.  Some call me RnB, some say RnB/Pop, others say Urban AC.  You know, on and on.  It really doesn’t matter. I’m whatever you want to call me, just keep spinning the records.

TERRANCE: Social media was in its early stages when you first came along, so how have you embraced or utilized it to promote yourself as an artist and your music?

WILL PRESTON: You’re so right.  When I released It’s My Will and even Caught in the Act, Facebook, Instagram and the others were just not relevant.  Snapchat and TikTok were unheard of.  I remember promoting on Myspace.  Now, how many people actually know what Myspace is?  In fact, I believe my old profile is still out there.  It has some of the live tracks streaming.  IG wasn’t even a big thing when #reacquainted was released.  Twitter was starting to boom at that time.  Admittedly, it’s the piece that is the most challenging because it’s always evolving.  I love it though.  I just have to stay on top of it.  I once had a very vibrant IG presence and took it down several years ago after being hacked, but we’re back up and thriving.  It has been great growing it again and interacting with those who love my music.  I have a team that helps with the various social media aspects, but I check my own messages and respond.  I post content.  I love the interaction.  Everybody can find me @thewillpreston on IG and Twitter.  You can get to my others from there.

TERRANCE: What can you tell us about your upcoming album?

WILL PRESTON: Man, I’m just so excited for the world to hear what I’ve been brewing in the lab.  I sing about love, that’s what I do.  The good, the bad, and everything in between.  There is so much depth to this project, both vocally and lyrically.  It’s going to put you in touch with your feelings. It will have you saying, yes I’ve been there and also have you celebrating how good love feels.  The sound is current with amazing track production by who I consider to be some of the best talent out there, Tone Jonez, The Legion, Al Fraser, and a few others.  Vocally, I showed up to work each day (laughs).  I was ready.  I look forward to hearing everyone’s feedback, but I think there is something there for everybody to enjoy.  If you’ve ever enjoyed any Will Preston music in the past, this is next level.

TERRANCE: Growing up who were some of your musical influences who helped shape you to who you are today as an artist?

WILL PRESTON: I’m often asked this question, and my answer probably varies a little each time because I love so many singers.  There are artists that I loved listening to, but I’ve never intentionally set out to channel them in my music. I loved singers who focused on the vocals and could give a great show just by listening to them.  People like Luther Vandross. I think he was the preeminent balladeer.  I loved everything he did.  He could do things vocally that I’ve never witnessed any other artist do.  So maybe my smoothness can be attributed to my admiration of his style. People like Gladys Knight, Lionel Richie, Dionne Warwick – She’s so smooth.  Sam Cooke – I love Sam Cooke.  Harry Connick Jr.  Aretha.  I was a big fan of Gerald Levert.  Marvin Winans is also one of my favorites.  Babyface is a beast vocally, but his writing is in a league of its own.  None compares.  He writes the language of love.  And of course, Whitney was in my opinion the greatest.  Vocally superior.  I don’t even think she understood the magnitude of what she possessed.

The artists that I really listen to and follow today are Avant, Calvin Richardson, Usher, Alicia Keys, Jorja Smith.  I like Chris Brown, Drake, The Weeknd.  As you can see, I love a variety of music. Not to mention all of the indie artists that I vibe with, Eric Roberson, PJ Morton, Russell Taylor, and others.

TERRANCE: If you could give one piece of advice to fellow independent artists, what would it be?

WILL PRESTON: Invest in yourself.  It’s bigger than having a great voice.  That’s such a subjective measure, and you can’t rely on that alone.  Music is more accessible now than ever.  You have to build your brand.  It takes time.  It takes drive.  It takes passion. And it definitely takes resources.  I would be selling a false dream if I said money is not important.  Do what you have to do to invest in yourself creatively and financially.  Maybe that means you can’t put out a full-length project, but instead focus on releasing a great single or EP.  Enjoy the journey.  Most people that we see as superstars today have put in many years of hard labor.  The optics of overnight success is merely an illusion.  And I would also say find someone who is doing what you want to do and study them. Study their moves.  Don’t try to reinvent the wheel.  When I first started out, there was a singer named Jarrard Anthony from VA.  I discovered so much about the indie music scene, venues, blogs, promoters, literally almost everything just by following his journey.

TERRANCE: What are the best attributes of being a live performing artist?

WILL PRESTON: Oh, this is where you have the fun.  This is where all of those songs come to life.  You get to interact with the crowd.  Some might know the words to your songs.  Some may only know a few words, and some might not know any, but you interact with the energy in the crowd.  Music brings people together.  For that moment you’ve solved the challenges of the world.  You allow people to escape the headaches of life.  It’s a good feeling when you can look out and see people smiling and moving because of the energy you’re giving. Definitely an amazing feeling.

TERRANCE: Any final words you would like to share with longtime fans and followers as well as new ones?

WILL PRESTON: Of course. Thank you to those who have been on the journey with me through the years as well as those who are just discovering the sounds of Will Preston. Your support is greatly appreciated and never taken for granted. We’ve got some exciting days ahead of us. Hold on and enjoy. Stay close!
Posted by Terrance at August 28, 2020

Email ThisBlogThis!Share to TwitterShare to FacebookShare to Pinterest
Labels: #willpreston