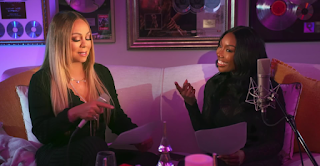 Five-time Grammy Award-winning Superstar Mariah Carey has confirmed a re-recording of  her single "The Roof" from her 1997 album Butterfly in collaboration with fellow award-winning artist Brandy.

Carey can be seen coaching Brandy throughout the process of arranging and recording the track courtesy of her MasterClass course.

In a statement about Carey's MasterClass she says:
“I’ve never let cameras in when I am creating - not when I’m writing, and especially not when I’m singing. But now I’m taking MasterClass members into my studio to show them how they can write and produce music using their voice and become anything they want to be as long as they create, re-create, reimagine, and reinvent.”
The new version of "The Roof" will be released exclusively with the Masterclass. Fans can access the Masterclass via a $15 monthly subscription.
The Video Chapters Includes:
1. Meet Your Instructor: Mariah Carey2. Producing With Your Voice3. Lyricism: Write About the Realness4. Writing With Samples5. Background Vocals, Part 1 (featuring Brandy)6. Background Vocals, Part 27. Instrumentation and Emotion8. Taking Care of Your Voice9. Surviving in the Music Industry
“Mariah is simply a genius. She’s one of the greatest artists of all time. In her class, Mariah is opening up her studio for the first time ever, teaching members how to use their voice throughout the music-making process, including in the studio and while navigating the industry.” -David Roger, founder and CEO of MasterClass
Posted by Terrance at April 14, 2022