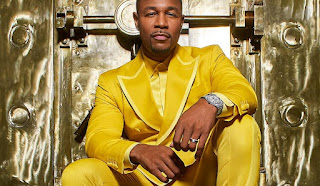 In a statement about the album, Tank says:

“'R&B Money' is a labor of love to my fans and to the genre of R&B.  This is who I am! I wouldn’t be here if it weren’t for artists like Marvin Gaye, Teddy Pendergrass, Keith Sweat, Al Green and my fans who inspire me every day to make music. I wanted this album to pay homage to my influences and my evolution as an artist, and I think that’s what this final album represents.”

In addition to releasing his new album, Tank and J. Valentine celebrated the launch of their “R&B Money” podcast via iHeartMedia and Charlamagne tha God's Black Effect Podcast Network with Jamie Foxx as their first guest. Debuting as the #1 Music Podcast, the show will celebrate the genre of R&B, representing the culture like no other. It will highlight everything from Marvin Gaye to Pink Sweat$. R&B Money has produced an exciting space for artists & executives in the game to reminisce with exceptionally compelling storytelling while building a place of discovery for the fans. See HERE

Tank supported the release of the album last night with his one-night-only 'The R&B Money Show' hosted by Tank and Jamie Foxx at the legendary Peppermint Club in West Hollywood, CA.

Email ThisBlogThis!Share to TwitterShare to FacebookShare to Pinterest
Labels: #Tank