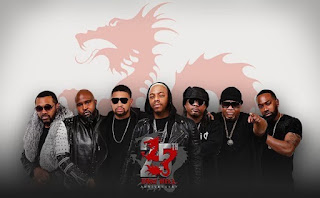 Known for hits such as "Tell Me", "In My Bed", "Never Make a Promise" and "How Deep Is Your Love", Dru Hill originally consisted of members Sisqo, Nokio, Jazz and Woody. The quartet released two multi-platinum albums: Dru Hill (1996) and Enter the Dru (1998).

In 2002, after a brief hiatus the Baltimore, Maryland natives returned with their third album Dru World Order featuring the hits "I Should Be..." and "I Love You" with additional member Scola.

After the departures of original member Woody and fifth member Scola, Dru Hill released their fourth album in 2010 titled InDRUpendence Day with replacement member Tao and released the singles "Love MD", Remain Silent" and "Back to the Future".

New members Smoke & Black (formerly of 90's R&B group Playa) started performing with the group in 2018 and they released their latest single "What You Need" in 2020.

Email ThisBlogThis!Share to TwitterShare to FacebookShare to Pinterest
Labels: #druhill