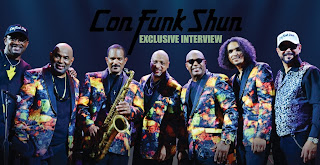 Initially known as Project Soul, R&B/Soul/Funk iconic band Con Funk Shun has been pleasing fans for over 50 years. Releasing a total of 12 albums with five reaching Gold status. They charted eight top 10 Billboard hits including the No. 1 hit single "Ffun", "Chase Me", "Electric Lady", "Shake & Dance", "Baby I'm Hooked" and more. Fan favorite "Love's Train" propelled Con Funk Shun's To the Max album to Gold status, but it was 40 years later that supergroup Silk Sonic remake of the song took it to No. 1 on the charts, helping the duo (Bruno Mars, Anderson .Paak) win a BET Album of the Year Award.

TERRANCE: First, congratulations on the release of your new Holiday album Home for Christmas. What inspired you guys to record your first ever Christmas album?

MICHAEL COOPER: Thank you. Well, we wanted to do a Christmas album for a while and we wanted it to be special because of course as you get older you want to leave your mark. Not many groups in our level and caliber have really embarked on the Christmas record and we just waited long enough in order for it to be really inspired and we finally decided to start on it last year. Then we got a real swift kick in the pants from the whole Bruno Mars' "Love's Train" thing. We really got creative at that point. We really decided, let's get this done. Not only do we have the Christmas record, but now we're finishing up our mainstream record that's going to be out in March or April.

TERRANCE: Are there any personal favorites on the album or one's that stand out the most to you?

MICHAEL COOPER: Well, that would be "My Favorite Things" and "Do You Hear What I Hear?". Those are my favorites. We had a really great time making the record and we're really proud of it.

TERRANCE: The original songs "It Must Have Been Amazing" and "King Beneath the Star" stood out to me.

MICHAEL COOPER: Yeah, those are wonderful pieces. I was trying to get Felton to give "It Must Have Been Amazing" to Disney and let them do some sort of animation to it and we make it happen that way.

TERRANCE: To what do you guys attribute your longevity to in this ever-changing music industry?

MICHAEL COOPER: We're backed by wonderful children, grandchildren and wives. Everybody's married. We got these great wives and we're backed by them. They stick with us and back us up. They put us on these planes and make sure we're nice, warm and fed and dressed properly and looking good and groomed up. That really helps you stick with it and we're really blessed in that fashion.

TERRANCE: What feeling do you guys get knowing your work has been sampled and covered by the likes of Silk Sonic, Drake, Fat Joe and Wiz Khalifa?

MICHAEL COOPER: Now that's a hero's welcome question there, because we're blessed to get all of these people covering our music. "Love's Train" was never a single. It was always an album cut, but it's always been the biggest song in our show. So to have the biggest R&B and Pop stars in the world cut your music and have it go number one and stay on the charts for months is unbelievable. That catapulted us in a place that we had no idea was coming. It did everything it did financially. We got a little better pricing out there. We got a lot more phone calls from places that we normally wouldn't get and like I said, it really inspired us to get back in the studio and really, really turn up the heat.

TERRANCE: As a songwriter and record producer, what are the key ingredients to a great song?

MICHAEL COOPER: Well, for me I'm only in the hit business. There are many great songs and nice songs and good songs, but I'm pretty much in the business of hit records. I want songs to be on the radio. My motto is, whatever you write, you want somebody to listen to it twice or three times. If they listen to half of it and they're done with it, then you ain't got nothing. If one person says play that again, then that means a hundred people will say that about the song and then that means a thousand people will say that about the song. So if people want to hear it three times, then that means you got yourself a hit.

TERRANCE: Are there any career highlights of yours that stand out?

MICHAEL COOPER: We got many. We're a 50 year band here, so in a 50 year span starting with the Watts-Stax movie back in '72. We've gotten seven Tom Joyner cruises. We've gotten almost thirty-five years I would say of constantly touring. The only break we've ever had is when I went solo and that was from '87 to '93 and then boom, right back in the saddle.

TERRANCE: And you mentioned touring, so are there any upcoming shows or events you could tell us about?

MICHAEL COOPER: Oh yeah, we got the Keith Sweat Fest down in Punta Cana, Dominican Republic coming. We're touring with Kool & the Gang through Live Nation. There are a lot of Live Nation dates. We will be doing quite a few Con Funk Shun festivals and of course we're appearing in some of our normal spots around the country. We're on the move again and basically revisiting some of the same places and opening the doors to some new places. The Love Train is never ending. Right now, the new tour is called "Smooth Jukebox". It's the name of the new record, but it's always about The Love Train.

TERRANCE: So, when people say R&B is dead, what goes through your mind?

MICHAEL COOPER: That's like saying Bruno Mars' cutting "Love's Train" was a waste of time. "Love's Train" is about as R&B as you can get. Then you got kids out there like Kevin Ross, that ain't nothing but R&B. So I don't know what to tell them. R&B is alive and well and it ain't going nowhere.

TERRANCE: What do you hope listeners take away from the Home for Christmas album experience?

MICHAEL COOPER: Good Christmas spirit for the next 30 years from that album. We want them to take away the fact that we care enough to go in the studio and make that for the people. We're not going to make any money on that record. We just wanted everyone to enjoy it and hopefully they will come back next year and buy it again and of course 2024, we will be coming with volume two.

TERRANCE: Any final words you would like to leave with your fans, followers and the readers?

MICHAEL COOPER: For that first number one, stay on your knees to God be the Glory. Keep praying and stay prayed up. We thank them for following our hearts and sticking with us 50+ years and we ain't going nowhere no time soon and keep on following us. The older we get, the busier we get.

Email ThisBlogThis!Share to TwitterShare to FacebookShare to Pinterest
Labels: #confunkshun