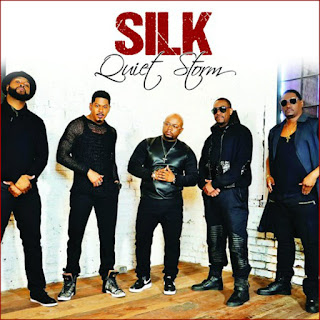 My interview with the legendary Silk! The new album Quiet Storm is out now: http://www.amazon.com/Quiet-Storm-Silk/dp/B01AVTULQC/ref=sr_1_1?s=music&ie=UTF8&qid=1459044774&sr=1-1&keywords=quiet+storm+silk

Terrance - You guys released one of the biggest R&B hits of the 90’s “Freak Me”, now looking back on it how did that single shape your careers or did it?

Jimmy Gates - I think it helped us with our identity in R&B and Hip Hop and it brought attention to the more mature R&B songs on the record like “Lose Control” and “Happy Days”.

Terrance - Throughout the past six albums are there any songs you thought should’ve been singles but perhaps the label went against?

Jimmy Gates - I wouldn’t say went against but one for me “Lose Control” was not officially released as a single by the record label it was picked off the album by radio, they loved it and played it.

Terrance - Not often do groups come back with their original lineup from when they first started how did you all maintain that?

Gary “Big G” Glenn - I just want to say by the grace of God we been blessed to stick together like a brotherhood. I mean we been able to do things on the side as well so again it’s just a brotherhood connection with us.
Terrance - You guys performed at the 2014 BET Awards along with Color Me Badd and Troop. What was that experience like to resurface on such a platform for both older and newer generations?

Tim “Timzo” Cameron - That was the most exciting experience lately and we would like to thank BET for inviting us to be part of that whole segment. We would like to thank the fans for following us all these years and just being onstage and backstage and meeting all the artists was just amazing. The only award we really won was the Soul Train music award for Best New Artist so to be connected with our people again and know they have our back is a great feeling.

Terrance - Now bring us up to date. Since the last Silk album Always and Forever you guys went on a hiatus. So what sparked the interest to record the Quiet Storm album?

Johnathen “John John” Rasboro - You’re right we haven’t released an album in a while, but first and foremost we wanted to make sure that it was the right album with the right songs. We actually didn’t plan to be gone this long as far as releasing an album but we definitely wanted to take our time and sit down together and kinda come up with songs we felt our fans would love and get accustomed to and again we never broke up or never stopped touring and things like that but with this particular album we just thought it was time, it was time. We got a lot of good reception, good warm reception from it and we don’t plan to be gone this long again (laughs).

Terrance - Compared to previous albums how is Quiet Storm different?

Gary “Lil G” Jenkins - On previous albums they weren’t self-contained this album is pretty much the first album under our label Silk Entertainment with distribution through EOne so it’s this album that involves us with entrepreneurship in the industry.

Gary “Lil G” Jenkins - I think what inspired that song was the producer sent us the demo and we heard it for the first time together and everybody was like Yo’ this is the first song we need to do and the statement it makes is so true you have to like someone before you can love them then the relationship will automatically grow. It’s a song for all ages and serves as a welcome back from Silk.

Terrance - The song “Baby Maker” has been described as Prince inspired. Would you agree?

Tim “Timzo” Cameron - I would say yes in a silky way. That song was actually inspired by a couple people we know on a personal level here in Atlanta.

Terrance - Are there any personal favorites from Quiet Storm?

Gary “Lil G” Jenkins - I don’t have a favorite I listen to it all the way down (laughs).

Terrance - What is it about Quiet Storm you would like listeners to take with their listening experience?

Gary “Lil G” Jenkins - We would like people to use this album as a guide to having remarkable relationships. Each song represents something within a relationship between a man and a woman. What a woman wants. What a man wants. What a woman wants done to them (laughs) so we want listeners to use this a booklet as an addition to the Silk anthology on how to keep your woman happy.

Terrance - Even though you guys have been in the game 25 years are there any artists in music today who inspire you in any way?

Tim “Timzo” Cameron - I’m still a fan of R. Kelly. I love the way he has persevered and continue to make good music. He has a wide range of songs and he’s still R Kelly and not selling out or changing up so I love his contributions to music to this day.

Terrance - Known for signature bedroom anthems like “Nursery Rhymes”, “Ebony Eyes”, “Meeting In My Bedroom” and “Let’s Make Love” fans have always wondered do you make love to your own music?

Tim “Timzo” Cameron - Not lately (laughs), it feel like the group is in the room. I remember some times back in the day you might go past some hotel rooms and hear some Silk songs but that’s what females wanted to hear and loved.

Terrance - Talk about any awkward or embarrassing moments you’ve encountered from female fans on tour.

Tim “Timzo” Cameron - Yeah we did a show just recently with Keith Sweat in Phoenix Arizona and a young lady came on the stage baring all and when I mean baring all I mean baring all so she was politely escorted off the stage but she was trying to put it on everybody (laughs) but it was all good and we have nothing but love she just got a lil too excited.

Terrance - How would you best like Silk to be remembered?