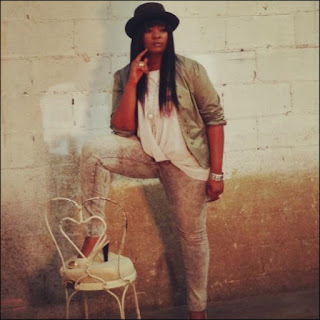 Terrance - What’s a typical day like for Candice Glover?

Candice Glover - My typical day when I don’t have a show is to stay in bed as long as I can! At times, I’ll head out to the gym and work out. After drinking my protein drink, doing my hair and makeup, which usually takes forever, I may even go to the Mall!

Terrance - You were recently casted in the Gospel musical play The Love Shack co-starring Ann Nesby, Dave Hollister and Eric Hawkins. Tell us how that opportunity came about and what it was like working with such talented artists.

Candice Glover - Well, one day, my business administrator informed me that the Casting Director for the musical stage play “The Love Shack” was interested in casting me for the lead role of Lovely Love. It was so exciting, because I love acting, and I had done another play in Ohio as well. So, after a few conference calls, it was decided that I would do it. I began reading the script, and rehearsing the original songs, and I just loved it. I was so honored to work with such a talented group of people. We really bonded and developed a good friendship, and by the end of the Play, we were like family!

Terrance - Is there new music on the way? If so, can you share the direction you’re going musically.

Candice Glover - Yes, I’m in the studio currently. This time, I’d like to put something out a little different than the American Idol music I’ve done. R&B is basically my genre, with a deep soulful flavor, so I’ll be bringing more soul to my music. Also, I’ve been writing a lot, so some of the songs will be written by me.

Terrance - Speaking of  American Idol. You auditioned three times in seasons 9, 11 and 12. In season 12 did you know for certain that would be your moment?

Candice Glover - No, not really. I really didn’t have a clue! After being eliminated in Season 11, I made the decision to audition one more time for Season 12 and give it another try. Then, with each passing week that I survived, I felt I was getting closer and closer.

Terrance - Did you have control over what songs you performed each night?

Candice Glover - No. With Idol, you are given a list of songs to choose from, and I just basically chose from that list.

Terrance - What are the best memories of being on the show?

Candice Glover - Wow! There are so many. I think meeting all the other contestants, bonding with them, and building lifelong relationships with them; performing with many talented and legendary guest artists; and of course, the amazing moment when Mariah Carey threw glitter on me at the conclusion of my performance of “Love Song.” I was so honored. She seemed to enjoy all my performances.

Terrance - How has life changed for you since the win?

Candice Glover - OMG! My life has changed so much. I’m from a small island in South Carolina. After winning the Idol title, it seemed like I went from living my simple country life to becoming a household name! I’ve been honored to be personally invited to the White House by the First Lady of the United States, Michelle Obama; I’ve performed at the reopening of the Washington National Monument, and I’ve been a special guest at South Carolina Governor Nikki Haley’s State of the State address. I’ve had the pleasure of singing with the legendary Ms. Patti LaBelle at the Super Bowl Gospel Celebration, travel to Vienna, Austria to perform at the “Lust for Life – Life Ball”, co-star in an original Hallmark movie, appear on TV, act in stage plays, release a debut album, and most of all, meet thousands and thousands of amazing and beautiful fans throughout the United States! My life has definitely changed!

Terrance - What are your thoughts on American Idol coming to an end?

Candice Glover - It’s sad. In many ways, it’s the end of an era. I want to thank everyone involved for giving me the audience to showcase my voice as well as the opportunity to grow as a performer. I am honored to have been chosen the Season 12 American Idol Winner and to have been a part of one of the greatest shows in television history!

Terrance - A while ago you released your debut album “Music Speaks”, how did you prepare for that?

Candice Glover - Well, it became a work in progress. During the process, I went from studio to studio and worked with each producer. We worked hard until it was just right, and I was very excited with the result.

Terrance - Was there a song in particular that was harder to put together than others?

Candice Glover - No, not really. Putting together the album was cool. We worked hard, but everything went smoothly.

Terrance - There’s a song on the album called “In the Middle” which I personally love co-written by fellow Idol winner Fantasia. What are your thoughts on Fantasia and how much she has flourished musically?

Candice Glover - I was so honored to have her bring her special touch to my debut album, Music Speaks. Fantasia has that special God-given talent that makes her stand out from the rest! She is an amazing Artist and performer, and I’m sure we’ll be hearing more and more from her!

Terrance - What's the one greatest feeling about performing for your audience?

Candice Glover - I think knowing that there are people who love my music as much as I love performing for them. It’s such a good feeling to look into the audience and see how moved and mesmerized some people are. I’m humbled to be able to bring about that kind of emotion.

Terrance - Who are some artists you would love to collaborate with in the future?

Candice Glover - I would love to collaborate with Jazmine Sullivan, Brandy, Drake and Ty Dolla Sign!

Terrance - Lastly what’s the greatest piece of advice you would give to aspiring artists trying to make it like you have?

Candice Glover - BE YOURSELF! Some people may hate you for it, but more people will love and respect you when you’re you!
Posted by Terrance at April 03, 2016