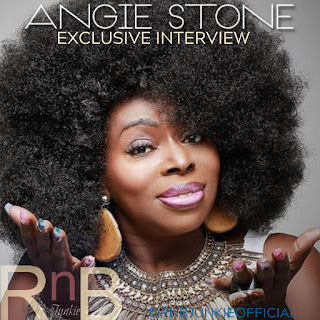 Legendary R&B songstress ANGIE STONE discuss her seventh studio LP Dream. Angie first got her big break in the early 1980s as one third of the rap group The Sequence. Since then Angie has been working behind the scene writing and contributing background vocals for artists like Lenny Kravitz, D’Angelo and Maysa until she caught the attention of Music mogul Clive Davis and the rest is history.

TERRANCE: First, I’d like to congratulate you on the success of the Dream album. Talk about it's inspiration.

ANGIE STONE:  First I want to say the Dream is an amazing project but I really have to give Walter Milsap the credit for being the inspiration behind the project and everything about it and grasp my life and situation with Walter is the brainchild behind this baby. I was just the voice. Candice Nelson was the pen and there were so many other components to the production. The Dream is an amazing project and it’s not just the best of the Dream but it’s running neck and neck with Mahogany Soul.

TERRANCE: You collaborated with Dave Hollister on the song “Begin Again”. How did that come about?

ANGIE STONE: Well Begin Again was an awesome song to start with but we were looking around for the best voice to do the duet with and of course quite a few names came up Anthony Hamilton, D’ Angelo, all of these people were just a bit too busy I think and Walter ended up saying he have Dave Hollister and I said Oh wow Bingo! Sometimes out of sight, out of mind but he clearly was the best choice for the record and he nailed it.

TERRANCE:  Is there a personal favorite?


ANGIE STONE: It’s hard to say what my personal favorite is but sometimes you know it’s "Magnet", sometimes it’s "Clothes Don’t Make a Man", other times it’s "Did You Forget About Me" or "2 Bad Habits " so I think on any given day my favorite song is approached from day to day so it changes.

TERRANCE:  Recently you revealed that you wanted to quit the music business. Can you go into more detail about that?


ANGIE STONE: Well I just think the music business has now compromised great music for all the components in my opinion that don’t have the value that’s necessary to expose the God’s greatest gift which is music. I’m in a space with my spirituality now that won’t allow me to mess around with that so yes I did want to walk away from it because there are a lot of fake, phony folk out here in the game and that’s not who I am.

TERRANCE: After the madness that occurred with R&B Divas Atlanta which caused you to resign from taping, would you be willing to do reality TV again?


ANGIESTONE: It all depends on what the focus is. If the focus is tearing down character, credibility, hard work or years of dedication I don’t want any part of that. We worked too hard and those years you can’t get back and I found myself in a procurer space when they were starting to tear down my character and me being the woman I am allowed a lot of this nonsense to go on because I wanted the reflection to be, Hey this could be you very soon and just stop the madness.


TERRANCE: What artist are you listening to in today's music?

ANGIE STONE: When I really, really want to get in my feelings it has to possibly be Le’Andria Johnson because she has a way of stirring your soul so to speak.


TERRANCE: An artist you’ve always wanted to work with but haven’t had the chance yet?

ANGINE STONE: If I had to work with anybody it would be Lauryn Hill I think.

TERRANCE: Talk about getting your first solo deal with Arista Records.

ANGIE STONE: I was actually doing some demos for a friend of mine who got the attention of Arista UK version and they fell in love with my voice and wanted to sign me. Clive Davis couldn’t understand how he didn’t get me first so he kinda deeboed me back to Arista over in the States and took control of the project.

TERRANCE: What was it like recording your debut album, Black Diamond?

ANGIE STONE: That album is special to me because the first song I ever wrote as a kid is called Freedom and I opened that song up. It’s the first song I taught myself how to play on the piano.

TERRANCE: Are you still in touch with your former group members from The Sequence and will there ever be a Sequence reunion tour or album?

ANGIE STONE: I always keep in touch with my partners. There’s always a reunion whenever we’re together. I would love to see a reunion tour happen. I’m already incorporating them into the show until we can get in the studio and actually get some stuff done. They’ll be working with me mostly traveling with me when it permits itself and people will get a chance to enjoy flashback moments.

TERRANCE: What advice or knowledge about the business did you learn from your former mentor, the late great Sylvia Robinson?


TERRANCE: Growing up who were some of your musical influences?

TERRANCE: What’s your favorite song you’ve ever written either for yourself or another artist?

ANGIE STONE: Favorite song ever written was Happy Being Me and I wrote that for myself and it was re-recorded by Donald Lawrence but it’s one of my greatest songs I think to date.

TERRANCE: You have the hits “Brotha”, “No More Rain (In this Cloud)”, “Wish I Didn’t Miss You”, “Baby”, “Sometimes” etc. How does it feel when you’re performing for a live audience and they know the words?

ANGIE STONE: Okay whenever I’m performing and I get the reciprocation that I’m giving I feel complete. Honest to God that moment is for you and only you can relish in that moment so it feels amazing.

TERRANCE: What is it like to work with Soul Legend Betty Wright because I know you both collaborated many times in your career.

ANGIE STONE: Working with Betty Wright is like looking in the mirror. It’s a mirror image of myself. Someone who’s been there before, someone who knows my every move because we are one. We are one in the same. We are both Sagittarians. We think alike, talk alike, sound alike.

TERRANCE: So far in your career, what do you feel is your greatest accomplishment?


ANGIE STONE: Being a mother. Having two children and having the challenge of trying to make sure they have a life and that we can have harmony within that relationship. That’s my greatest, greatest joy.


ANGIE STONE:I think the one misconception is everybody thinks I’m a Diva. I don’t even know what the word Diva means but it sounds like it means a person who feels they are above the rest and that is not who I am.

TERRANCE: You mentioned before that Whitney Houston was a good friend of yours. What is it about her that you will always remember?


ANGIE STONE: What I will remember about Whitney is her heart. The fact that in spite of everything she went through in her life she took the time to get with the children in her neighborhood. She made a way to give back. She went home and she did it every year. It’s an inspiration and a Legacy in my opinion that should be continued through other artists and I plan to do just that and it will definitely be something in the memory of Whitney Houston.
Posted by Terrance at December 21, 2015