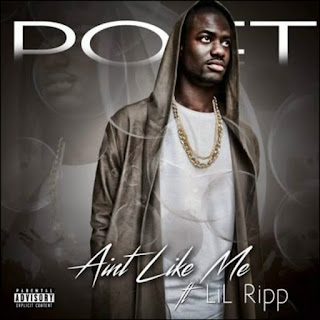 My interview with Independent R&B recording artist Poet Wright. After serving time in the army Poet went on to do various other jobs but never forgot his passion for music. He began to pursue music full time when moving to Tacoma, and linking with producer Michael MI Cole. MI has produced beats for artists such as Neyo, Trey Songz, and Omarion.

Poet's first single "Ain't like Me" feat Tacoma native Lil Ripp is a perfect blend of the artist Poet wishes to be known as. Using his R&B vocals to complement a Hip Hop track is the direction this record takes you. Never forgetting his home town, Poet shouts out South Carolina and St. Helena Island by referencing 843 which is the area code. Here’s Poet Wright…

Terrance - Hello Poet Wright, how are you doing?

Terrance - Your single “Aint Like Me” is out now. Can you share details on what it was like creating this song and what can we expect?

Poet Wright - No, it’s top secret. I’m joking. Haha. Actually it just happened. As I was leaving the studio the producer was playing beats and he played this one. And right then I came up with the hook. I was like, “hey send me that one.” So I sat on it for two weeks then suddenly I played it at home and started writing to it. Went back to him and he made me scrap the whole song!!! He said it sounded “dated” So that day the whole song had to be rewritten and I went in the booth and started singing. Turned all the lights off and just did my thing. It’s an upbeat song. Something to dance to in the clubs. Definitely the vibe I wanted for my lead single. Of course I also had to give a shout out to my hometown on my very first project so you’ll hear that and a little island influence in there as well.

Terrance - As an independent artist, how do you plan to effectively promote your single?

Poet Wright - Social media has been my biggest platform so far. The amount of people I’m able to reach from behind the keyboard is amazing! Also, I’ve been doing a lot of radio promo and interviews. I have some live performances lined up as well in Tacoma, WA.

Terrance - I understand that you also have an EP [Extended Play] coming soon as well. With the lead single “Aint Like Me” an uptempo, will there be any midtempos or ballads?

Poet Wright - Oh definitely! I really wanted to go back to when the male singers used to be able to just stand there and sing without all the theatrics added. The way RnB music used to be. Some are still doing it now. Like Sam Smith, Tank, or John Legend for example. I’m actually finishing a song on the EP now where I get to display vocals. It’s an adult song. Not very radio friendly! Lol

Terrance - How do you prepare before performing? Have there ever been nervousness?

Poet Wright - Actually, I never experienced nervousness before a performance until I began to do original music. For me, it’s a totally different feeling than doing a cover song. So many things go through my head, are they going to like it, are they even going to pay attention. So, to help combat the nerves I start off by doing a little talking to get the crowd interacting. Or I may even start off with a very familiar covers song to get the crowd’s attention before I go into original material. Don’t by Bryson Tiller seems to work pretty well.

Terrance - When did you know music was your passion?

Poet Wright - From what my grandmother tells me, my whole life!!! Lol She says when I first started I would sing all day, completely off key and horrible as ever. But she encouraged me until eventually I got better! I’ve been singing as far back I can remember. Having my cassette recorder in the bathroom and pretending like I was Luther!!

Terrance - What are the advantages and disadvantages of being an independent artist?

Poet Wright - One of the major advantages of being independent is being able to have complete creative control of what type of music I want to record and not having the pressure of a label to have a certain image or push out music on their time. On the opposite end, being a signed artist would definitely elevate me to a better platform. The financial backing of a label and the exposure are very valuable.

Terrance - How do you define “Success”?

Poet Wright - I feel like I’ve reached success once I can leave a footprint in RnB music. Leaving a legacy, to know that I actually lived while I was alive. I don’t think my success can be measured during my own life time.

Terrance - Where do you see your music career in five years?

Poet Wright - I’m going to shoot high with this one. Lol I want to be walking the red carpet of the AMA’s, Grammy’s, or Billboard Awards. Whether I win or get nominated is a whole different question. Hahaha It could happen. I’m going to speak that into existence.

Terrance - What motivates you the most?

Poet Wright - The actual idea of doing what I love and being able to provide for my family. I never saw myself working a 9-5 to fulfill someone else’s dream. I don’t believe I was blessed with this voice to sit at a desk for the rest of my life.

Poet Wright - Just like anything else, RnB is constantly evolving. The lyrics, the videos, the image of the artist. But RnB music will always be around. People will always love those songs that reminded them of how they felt at certain points in their life. That’s what RnB music is supposed to do, evoke feeling! When artist like Jazmine Sullivan can sit on stage and sing and make you feel things you’ve never even been through, you know RnB music is alive!

Terrance - Favorite format of purchasing music: Physical vs Digital, and why?

Poet Wright - I prefer getting physical copies. Lol I guess I’m “old school” I like being able to flip through my book of cd’s and looking at the album covers! I miss the days when the lyrics used to come with the cd!

Terrance - One thing about the music business you would change?

Poet Wright - The gimmicks. I believe that talent should be able to speak for itself. It seems that many talented artists are being overlooked. When the gimmick becomes the focus and not the art, then you have lost yourself as an actual music artist.

Terrance - Name one Legendary artist who would be your dream duet and why?

Poet Wright - I would love to have had the chance to duet with The Voice, Whitney Houston, but of the living legends I would definitely want to work with Babyface. His catalogue of music is ridiculous and he can sing! He would definitely be able to write a hit!

Terrance - If you could perform anywhere in the world where would it be and why?

Poet Wright - South Africa, I remember watching Whitney perform there and the reaction she got from the crowd. I’d love to feel that same energy.

Terrance - Three albums you could listen to for the rest of your life?

Terrance - What’s the first concert you’ve ever attended and what was the experience like?

Poet Wright - The first concert I ever attended was a gospel concert lol!!! It was actually Shirley Caesar. I was a preacher’s kid so everything revolved around the church, including what music I was exposed to. I remember her being such a short lady and she was so full of energy! I loved it!

Terrance - Are there any aspirations outside of music?

Poet Wright - Starting a homeless shelter for teenagers has been something I’ve had my eye on for a while. Also, diving into the food business. Whether it be buying into a franchise or starting my own restaurant with my grandmother.

Terrance - What’s one skill you wish you could master?

Poet Wright - Singing! Lol There’s always room to grow and more to learn. I listen to artists like B Slade or Rachelle Ferrell and the things they can do with their voices are amazing!

Terrance - What advice would you give to other up and coming artists trying to get out there?

Poet Wright - Make sure your promo is definitely lined up! Having a great song is awesome, but if no one hears it then it’s wasted. Never give up. Even tho that sound cliché, it’s actually true. It’s a lot of hard work but definitely worth it once you’ve reached your goal.

Terrance - If people would like to find you in social media where do they go?