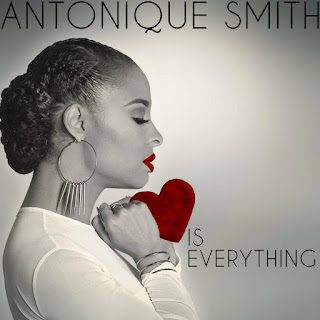 My interview with Actress/Singer Antonique Smith.

Antonique Smith is probably best known for her role in “Notorious” portraying Faith Evans. In November she released her first highly anticipated musical installment, Love Is Everything to rave reviews.

Terrance - You’ve had an amazing career thus far in Television, Broadway, Films and now Music. What has been your biggest accomplishment to date?

Antonique Smith - Thank you so much! I think my greatest accomplishment has been my perseverance. A lot of times the major thing that separates those who are successful from those who aren't is that the successful people never quit, through all the no's and the rejection and the hard times.

Terrance - Tell us about your first EP project, Love Is Everything. What was the recording experience like?

Antonique Smith - Love is Everything speaks of some of the different love experiences that we all go through, from being liberated from a bad relationship or seeking to deepen your connection with your partner, all the way to the love of humanity. I truly believe that if we all loved ourselves and one another more that most of the problems in our world wouldn't exist. This EP is the jewels of wisdom that I've collected over the years in my personal life experiences. Love is Everything. Because I'm independent, the recording process was unorthodox. It was a labor of love by everyone involved.

Terrance - What’s the inspiration behind your latest single “Higher”?

Antonique Smith - Higher was written to help navigate the moment when the person you love is afraid to commit. The wrong thing to do is to start asking questions like, "where's this going" and "are we exclusive?". Higher is an example of a wiser way to go about it.

Terrance - The lead single “Hold Up Wait A Minute (Woo Woo)” was nominated for a 2015 Grammy. What was it like to get a nomination with just your first single?

Antonique Smith - It was unbelievable!!! My first single and I'm an independent artist!!! Amazing!!

Terrance - Who are your biggest musical influences?

Terrance - First concert ever attended and what was the experience like?

Antonique Smith - I vaguely remember my mom taking me to a Michael Jackson concert when I was really little. It was larger than life!

Terrance - Artists always have that special place or places they would love to perform someday. What are yours and why?

Antonique Smith - I want to perform at Madison Square Garden and Central Park. Both of those places are the epitome of performing at home.

Terrance - You also had a supporting role in John Singleton’s action thriller Blockbuster film Abduction. How did that come about?

Antonique Smith - I did! I played a CIA agent. John Singleton has quite a list of actors that he believed in and gave a shot to. I'm one of those actors. He loved my performance in Notorious.

Terrance - Speaking of Notorious, how did you get that role?

Antonique Smith - I literally fought for that role! I had to beat out a bunch of girls who were more famous at the time. In the 4th audition, I was doing improv with an actress who was auditioning to play Lil Kim and I was supposed to be confronting her about sleeping with Biggie and she gave me a bunch of attitude and put her hands in my face and I went East Orange on her and pushed her and the room went crazy with excitement. The director said that's when he knew I was Faith.

Terrance - What was the experience like in the Broadway musical RENT and would you do Broadway again in the future?

Antonique Smith - I plan on doing Broadway again in the future. It was an amazing experience. RENT was such a special show and I'm grateful to have been a part of it.

Terrance - When you’re not working and shut all forms of entertainment off what do you do for relaxation?

Antonique Smith - I think the only thing I do that shuts all forms of entertainment off is when I go to get massages.

Terrance - Are there any hidden talents we’re not aware of that you possess?

Antonique Smith - Hmm, I don't know. Maybe writing. Most people only know about my songwriting. But, i've written more than just songs.

Terrance - What’s the greatest advice given so far?

Antonique Smith - When I was a teenager, Celine Dion told me to never let anyone change me.

Terrance - What is it you would like people to take from their listening experience with Love Is Everything?

Antonique Smith - I hope they are moved, excited and inspired to action!
Posted by Terrance at December 23, 2015